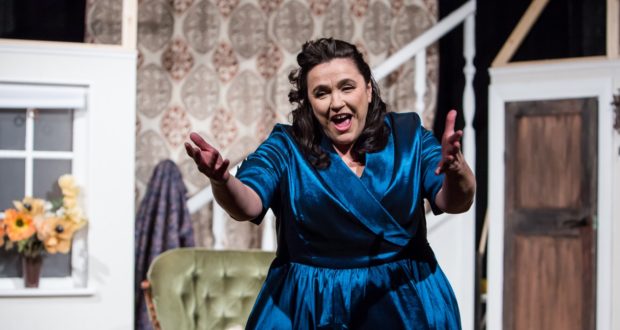 Pros: A wickedly good impersonation of Hattie Jacques and a cleverly formatted monologue examining the ever present obsession with image.

Cons: Although well written and observed, this show tends to state the obvious when it comes to the role of larger women in the acting profession.
Becoming Hattie, Leicester Square Theatre – Review

Pros: A wickedly good impersonation of Hattie Jacques and a cleverly formatted monologue examining the ever present obsession with image. Cons: Although well written and observed, this show tends to state the obvious when it comes to the role of larger women in the acting profession. Hattie Jacques was a doyen of British comedy for over 30 years until her untimely death in 1980. An actress of great depth and ability, her career was restricted to character roles because her size dictated what she could or couldn’t do. Whilst Hattie had a memorable career in radio, TV and film&hellip;

A wonderful reminder of the Carry On genre, and a genuinely affecting performance from Ashley Christmas in the title role.

Hattie Jacques was a doyen of British comedy for over 30 years until her untimely death in 1980. An actress of great depth and ability, her career was restricted to character roles because her size dictated what she could or couldn’t do. Whilst Hattie had a memorable career in radio, TV and film she was invariably cast as the battleaxe matron or frustrated spinster. Never would she be the romantic lead in a straight drama. She got her nickname from Hattie McDaniel, a similarly built actress who won an Oscar for her role in Gone with the Wind. That nickname, unsurprisingly, stuck and seemed to limit her potential further still. This fascinating monologue now reviews Hattie’s career and asks whether anything has changed for larger women in the acting profession?

Ashley Christmas plays Joanne David, an actress who’s looking for her big break and who cites Hattie Jacques as her greatest inspiration. The story begins in 1974, that far off era when arctic rolls were sophisticated and colour TV sets were a status symbol. Joanne recalls the delight of watching Sykes for the first time, and seeing Hattie perform; a funny, beautiful, charming actress who was large, just like she is. The action switches from Hattie to Joanne, and then back again, as key events in their lives are compared. The focus is particularly on Joanne’s efforts to be accepted as an actress, not just a large actress. Scenes from Hattie’s life are affectionate and poignant, as she wrestles with a turbulent private life and plays out a unique role in the Carry On films. Scenes from Carry on Doctor are recreated with audience members acting as Hattie’s stooge. Hilarious exchanges with Kenneth Williams are also recalled to great effect: ‘Matron, you don’t understand, I was once a weak man.’ ‘Oh, once a week’s enough for any man!’ Therein lies the crux; these scenes were funny because Kenneth Williams, a slightly built man, was being chased by Hattie, who’s overweight, over-sexed and desperate for affection. The little-and-large-routine worked not just because of Hattie’s size, but also because of her impeccable comic timing. Nevertheless, the die seemed to be cast for Hattie, with the assumption that fat could only ever be funny.

Joanne’s experience isn’t all that different. An unsympathetic agent getting her cast as a cleaner, maid or dinner lady isn’t exactly breaking new ground. Frequently the nurse but never the doctor, she consoles herself with the fact that she is at least a working actress. However, why should Joanne be dismissed from starring roles, just because she doesn’t conform to the stereotypes? Is it simply safer cast to her as the gobby council estate mum or over-sexed harridan, characters we instantly recognise as earthier beings and therefore more likely to suffer life’s imperfections? Joanne is understandably tired of being the punchline, the one who ate all the pies, but nothing really has changed. While Roseanne Barr, Rosie O’Donnell and Melissa McCarthy have made progress in the US, we still appear to be in familiar territory. In the UK, Dawn French, Jo Brand and the wonderful Victoria Wood have all been major players in the British comedy scene. But there is one common denominator that binds all of these performers together: they are all stand-up comics who branched into character acting. Hattie would never have taken a part off Sophia Loren in the 1950s, just in the same way Melissa McCarthy will never beat Jennifer Anniston to a role today.

This is perhaps where the play falls out of bed, insofar it is stating a blindingly obvious fact. It has a hope bordering on expectation that things will change. Alas, things will probably remain as they are. I can only hope that excellent actors like Ashley Christmas continue to follow in Hattie’s footsteps and prove me wrong in this. But whatever the future brings, right now Becoming Hattie is an intelligent and witty portrayal of a great performer with a thought-provoking indictment of body image.