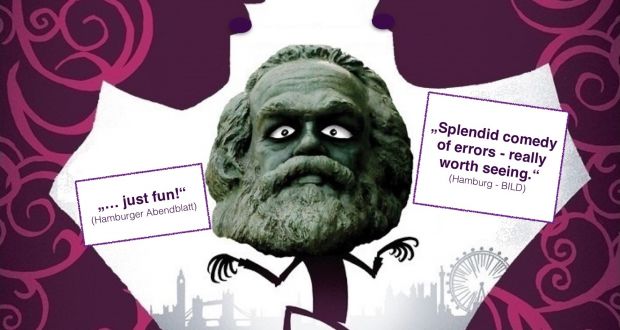 This is your chance to win tickets to see Comeback! The Karl Marx Musical, Upstairs at the Gatehouse. To enter, simply retweet the tweet below by 5pm on 1.5.16 and tell us who else deserves their own musical.

#COMPETITION Win tickets to Comeback! The Karl Marx Musical @GatehouseLondon
Retweet by 1.5.16 & tell us who else deserves a musical.

“Funnier than the Communist Manifesto” “More romantic than Das Kapital”

Witchcraft. Karl Marx. Gold plated airplanes. All in one musical.

A downtown proletariat boy meets an uptown bourgeoisie girl. This proletarian Marc then gets mistaken for Karl Marx, who is summoned from the grave to save the financial crisis by certain dark forces from the banking world. Marc protests but is bribed with wads of cash to go along with it. Marc ‘Marx’ has a choice – to live like ‘Fabulous Fab’ or run off with his newly reformed socialist girlfriend. What will Marx do in this tale of unintended consequences?

Part parody, part political satire, this hard-edged rock musical is the creation of one of Germany’s most beloved artists, Tobias Künzel. Born and bred in the former GDR, he is a member of German hit group ‘Die Prinzen’ which to date has sold over 6 million albums. Since then, as well as being recognised as a solo artist, he has written the hit German musical ‘Elixir’.

‘Comeback!’ arrives in Highgate straight from a run of sold out shows and rave reviews in Germany:

“A mix of catchy tunes, a pinch of romanticism and plenty of slapstick. In order to speak with Karl Marx, opium for the people is required.” – Berliner Morgenpost

This riotous rock musical has already wowed audiences in Leipzig, Hamburg and Berlin now it comes to Highgate, last resting place of its great inspiration – KARL MARX. Not to be missed!

Winners will be selected at random from all correct entries.
Winner receives a pair of tickets to see Comeback! The Karl Marx Musical.
Tickets to be collected at the box office with no cash alternative.
Tickets are subject to availability and are non-transferable and non-exchangeable.
Additional expenses are the responsibility of the prize-winner.
Editor’s decision is final.

Previous: The Rise of the Independent Critic
Next: Bards without Borders, Rich Mix – Review