Home » Features and Interviews » The Ups and Downs of Self-Producing 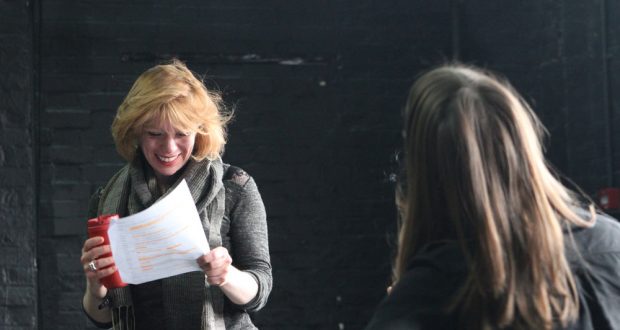 The Ups and Downs of Self-Producing

Author: Everything Theatre in Features and Interviews 23 April 2016 0 731 Views

As an early-career playwright in London’s crowded theatre scene, it can often be a challenge to get your plays noticed. Ahead of her production of Playground at The London Theatre, playwright Karen Morash discusses the benefits and challenges of producing your own work.

I am a producer with Head for Heights Theatre Company. I am also a playwright. I don’t usually combine the two, for fear that it might make my head explode. But sometimes I must. For my upcoming production Playground, I am donning both my producer’s hat (a purple bowler with a white feather) and writer’s hat (black beret, with a fetching red bow), and desperately hoping they’ll contain any brain detonations.

The reason I’m taking on both jobs has a little to do with saving money, and a lot to do with knowing that, at this point in my career, it’s the best way to get my writing seen. Unlike many playwrights, I have previous producing experience, and it makes sense to put it to use. I’ve often been asked, ‘What exactly does a producer do?’, to which I usually reply, ‘All the stuff that no one else wants to.’ When done correctly, producing is a full-time job, and most writers would rather just concentrate on the script. The reality of the British theatre industry is, however, that if you’re starting out and want your work to be seen, you have to take some responsibility for doing it yourself.

The reality of the British theatre industry is that if you’re starting out and want your work to be seen, you have to take some responsibility for doing it yourself.

Playground was written as part of my practice research PhD at Goldsmiths, meaning that it needs to be properly staged. I considered submitting it to various new writing theatres and hoping someone would bite, but previous experience has taught me that though this approach may get you a meeting or two, it’s unlikely to get your script produced. At a recent Theatre Industry Day in Brighton hosted by New Writing South, representatives from various literary departments told the assembled playwrights that whilst they do read and consider all submitted scripts, the best way to grab their attention is by inviting them to see your work. In other words: you gotta get it on its feet. This makes sense to me; scripts can stand on their own as literature, but really, they’re meant to be performed. The test of a playwright’s skill is not what’s on the page, but how it translates to the stage.

This puts playwrights in an awkward position, however. Staging a play can be an expensive business, with little chance of financial gain, and funding isn’t easy to come by (though it does exist, if you know where to look). Then—unless you’re the type of masochist who truly wants to do it all—there’s the issue of finding someone to direct. That director must be happy to deal with a living, breathing writer who may have (gasp!) opinions on what’s done with her hard-wrought words. Shakespeare, Ibsen and Chekov are, you know, alright and everything—but I think it’s the fact they can’t complain that makes them so popular with directors.

Securing a venue can also be a challenge. Even if you’re paying for the space, many theatres want to vet a script before letting your production in. They can also book up a year or more in advance, so you need to be super-organised and patient (neither of which are my strong suits). Of course, there are other options. Some venues, such as the London Theatre, where Playground is running, will let writers produce a one-off performance (with minimal tech) for a very reasonable fee. This allows you to get the thing staged and invite industry representatives, who will be bowled over by your writing and sign you up on the spot (probably). Another option is taking your work to fringe festivals. Though it can be tricky to stand out in Edinburgh, other events, such as the Brighton Fringe, involve reasonable costs and less competition.

Scripts can stand on their own as literature, but really, they’re meant to be performed. The test of a playwright’s skill is not what’s on the page, but how it translates to the stage.

And then there’s casting, contracting, budgeting, funding, marketing, finding rehearsal space, emailing, emailing, and more emailing, sourcing a tech team, smiling when your insides are a wrung-out dishcloth . . . Basically, there are a lot of ­—ings. You secretly long for the days when forcing yourself through the agony of a third draft was your biggest challenge. If you’ve had previous producing experience, you hopefully know to keep casting and technical requirements simple. (I.e., no stage directions requiring twenty extras to appear in only one scene, dressed as animals. I speak from bitter experience.) If not, you’ll certainly learn for next time!

But, in the midst of this, you have your play. If you are as lucky as I’ve been with Playground, you also have a group of wonderful and talented human beings bringing your script to life and making it far better than the thing you wrote. For me, the rehearsal room is like an oasis. Whilst I am watching my directors and actors at work, I can focus on the magic they’re creating, instead of the million things I have on my to-do list. At the same time, I know there’s someone working really hard on all the stuff that happens outside of the rehearsal room, because that person is me (and I’m a tough boss).

If I could give one piece of advice to would-be playwrights, it’s to go out and learn other theatre jobs. Do some actor training, so you know the amazing things they can do with their bodies. Attempt to direct a play, so you understand why sometimes stage directions get ignored and cuts are necessary. And above all: produce something by another playwright. Not only will you be helping someone else out, you’ll also be storing up hugely valuable experience and information. That way, when it comes to getting your own work on stage, your head may stand a chance of staying attached to your shoulders.

Playground is on at the London Theatre 28 April – 1 May. Book tickets here.

Karen is hosting a post-show Q&A on 29 April for playwrights interested in producing their own work, featuring representatives from Arts Council England, Spread the Word, and the London Theatre.