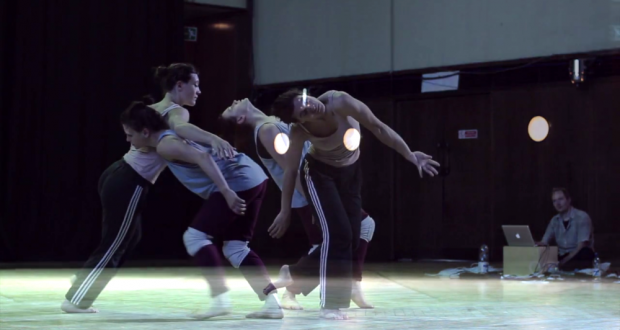 Pros: A stunning opening duet demonstrates the power of contemporary dance at its best.

Cons: A loss of conceptual, choreographic and physical momentum results in a sense of stagnation. The sound design fails in its bid to immerse.
Metaphors We Live By, Greenwich Dance – Review

Pros: A stunning opening duet demonstrates the power of contemporary dance at its best. Cons: A loss of conceptual, choreographic and physical momentum results in a sense of stagnation. The sound design fails in its bid to immerse. Contemporary dance and cognitive linguistics may seem unlikely bedfellows. Intriguingly, though, Metaphors We Live By appears to take its name from the title of a seminal academic text written by George Lakoff and Mark Johnson. The book, published in 1980, explores the ways in which metaphorical language shapes our thoughts and behaviour on a daily basis, without our conscious awareness. To&hellip;

This concept-driven dance production promises much, but fails to realise its potential.

Contemporary dance and cognitive linguistics may seem unlikely bedfellows. Intriguingly, though, Metaphors We Live By appears to take its name from the title of a seminal academic text written by George Lakoff and Mark Johnson. The book, published in 1980, explores the ways in which metaphorical language shapes our thoughts and behaviour on a daily basis, without our conscious awareness. To take a common example, arguments are often conceptualised as metaphorical ‘wars’ or ‘battles’, to be ‘won’ or ‘lost’, ‘attacked’ or ‘defended’ – how does this kind of language shape our approach towards views which conflict with our own?

Metaphors We Live By, a collaboration between choreographer Annie Pui Ling Lok and sound designer James Dunn, aims to unite sound and dance in an immersive exploration of ‘lost meanings and tangled relationships’. An ambitious task, but one I really wanted them to succeed at. Where words fall short, dance, in its purest form, can often touch something deeper. The opening raises my hopes. The audience is plunged into darkness as a spoken string of metaphors begins to volley between various speakers placed around the room (‘a troupe of dancers’ and ‘a pan of critics’ seem particularly pertinent, although ‘a descent of relatives’ is my personal favourite). In due course, dancers Bettina Carpi and Anne-Gaëlle Thiriot appear, falling, apparently effortlessly, into a perfectly synchronised duet in which they truly seem to move across the hall’s bare wooden floor as one. Lyrical contemporary movements are seamlessly interwoven with elements which appear to be drawn from breakdance and capoeira. The dancers beckon us into a world of pure freedom and joy, augmented by a sense of weightlessness which is both literal and metaphorical.

I’m sold, to the point at which I’m prepared to overlook the oddities of the performers’ wardrobe choices (both wear rehearsal gear – leggings, sweatshirts layered over vest tops, not-particularly-posh trainers and next to no make up). In fact, I’m ripe to be convinced that the ‘no-styling’ styling is a conceptually-driven decision, crucial to the integrity of the entire production. But then things start going downhill, and, unfortunately, never really recover.

A stunningly swift loss of steam is felt at all levels: conceptually, choreographically and – for the poor dancers upon whose impressively toned shoulders the whole thing rests – physically. Sustaining this level of intensity for more than a few minutes would challenge the strongest athlete, so an uninterrupted two-woman show was always going to pose some logistical challenges. Challenges which haven’t, I’m afraid, been met. Although the girls are afforded lengthy interludes of increasingly elementary choreography and even complete inertia (as they lie panting on the floor), their physical struggle is all too plain. Sadly, in the non-contact work which makes up the bulk of the performance, the synchronicity, fluidity and transcendent energy of the opening is never recovered. Meanwhile, the choreography’s decreasing complexity induces a sense of stagnation. We quickly cease to feel that the production is going anywhere, and the sound design, perhaps due to logistical constraints on speaker placement, never really succeeds in ‘immersing’ us. Whilst promising ideas (including a ‘birdsong’ section and the mirage-like materialisation of a man with a ukulele) continue to pop up, their realisation and integration is hampered by fatigue.

Although it’s ultimately unsatisfying, with a stale centre and damp squib of an ending all but obliterating the memory of its glorious beginning, the bones (oh look, another metaphor for you) of something special are undoubtedly there. Further refinement and development (and perhaps, dare I say, an interval?) required.