Home » Reviews » Comedy » Jonny and the Baptists: The End is Nigh, Orange Tree Theatre – Review 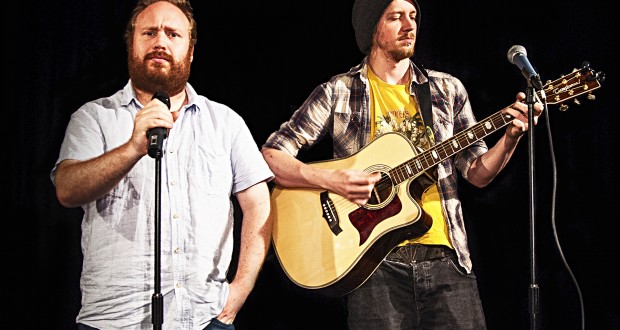 Credit: Jonny and the Baptists

Jonny and the Baptists: The End is Nigh, Orange Tree Theatre – Review

Cons: The pair dwell so heavily on their own failures that it’s tempting to switch off before the payoff.
Jonny and the Baptists: The End is Nigh, Orange Tree Theatre – Review

Pros: A serious message delivered with joyful humour and fine musicianship. Cons: The pair dwell so heavily on their own failures that it's tempting to switch off before the payoff. In 2015, Jonny and the Baptists' latest musical comedy, The End is Nigh, premiered in the UK to rapturous acclaim. Now, they're touring again – taking in a huge range of venues across the country, from Soho Theatre to Calstock Village Hall. It's not surprising that the pair can fill theatres. Apart from the great reviews for this show, people know them from Radio 4's Now Show, various Edinburgh&hellip;

Light jokes and silly antics sweeten an unmistakable call to arms in this uproarious musical comedy.

User Rating: Be the first one !
In 2015, Jonny and the Baptists‘ latest musical comedy, The End is Nigh, premiered in the UK to rapturous acclaim. Now, they’re touring again – taking in a huge range of venues across the country, from Soho Theatre to Calstock Village Hall. It’s not surprising that the pair can fill theatres. Apart from the great reviews for this show, people know them from Radio 4’s Now Show, various Edinburgh Festivals, two other acclaimed political protest shows – and in frontman Jonny’s case, New York’s Off Broadway. They can clearly be trusted to get lots of laughs. But – and this was the question they ask – can they ACTUALLY change anything about the world?

I was lucky to catch the pair’s one-night stint at Richmond’s Orange Tree Theatre. The carpeted entrance /bar area (opposite, not above, the pub of the same name) feels unnervingly like a hotel lobby. The theatre space, however, is a mini amphitheatre with seats on all sides, and with the audience looking down on the performer on the floor below. The ‘stage’ is completely bare except for a spotlit guitar on a stand. One performer strums quietly from a front seat, while the other walks around offering jelly babies to the audience members (though not to me, sadly).

After a warm-up ballad to German Chancellor Angela Merkel, and an ode to grumpy old men in gastro-pubs, the show proper launches almost quickly enough to gloss over the weight of its subject matter (climate change) with a rousing chorus of We’re All Going to Die – the show’s catchiest chorus. But what can a pair of comedians do? By their own gleeful admission, they’ve roundly failed to make any impact with their previous ‘missions’: the 2015 election, and stopping UKIP. But, they’ve been inspired: if the citizens of Stony Stratford, whose audacious book-borrowing protest saved their library from closure, could bring about change, then why not a pair of comedians from Reading?

The premise of the pair’s quest is Jonny’s promise to his young niece Isabella (played prettily by Paddy Gervase, the duo’s other half) that he will singlehandedly stop global warming. If the show had been more ‘theatre’ and less ‘improv comedy’, I’d have found the silliness of the premise annoying, but in this piece, it’s a strength. The show is full of razor-edged gags about everyone, from childless 30-somethings and Londoners who can’t drive, to dirty politicians and climate change deniers. The comedy moves fast enough for the audience not to take anything too personally, but not so fast that the idea of drawing a willy on Matthew Hancock MP isn’t vandalously, childishly, hilarious. Also in abundance were gross-out moments (Jonny eats a half-eaten jelly baby off the floor) and some very catchy songs.

No-one gets off scot free in The End is Nigh, least of all its makers. It’s easy to think that they don’t really tackle the issue because they’re too obsessed with the comedy of their own ineptness. That might be true, sometimes. But it’s also why, to my mind, the show is so effective. In laughing and plotting silly ways to get bigwigs to take notice, I realised that ‘do anything you can think of to stop climate change, however silly’ is the most important – and the only achievable – call to arms there is.

Written, Directed and Produced by: Jonny and the Baptists
Booking Link: http://jonnyandthebaptists.co.uk/
Booking Until: 27 May 2016 (UK tour)

Tagged with: Jonny and the Baptists Orange Tree Theatre Paddy Gervase Slider The End is Nigh