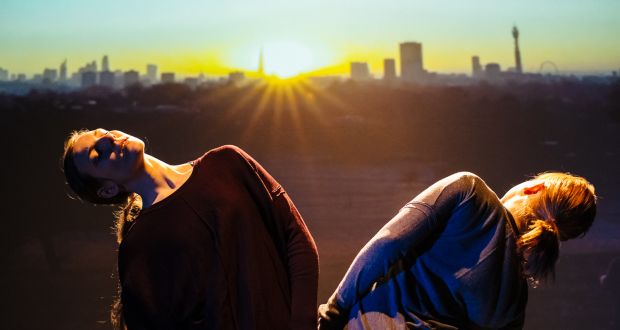 Cons: The large audience often blocks the three dancers from view and at times the live dancing and pre-recorded footage does not feel fully integrated.
Bridging the Void, Rich Mix – Review

Pros: The production features exciting, high energy movement set to visually arresting video footage. Cons: The large audience often blocks the three dancers from view and at times the live dancing and pre-recorded footage does not feel fully integrated. Bridging the Void is a dance, film and music production with choreography by Rachel Johnson. The production combines live dance with original music and footage of a sunrise over Primrose Hill, which is projected onto the back wall of the venue. Audience members are encouraged to walk around the venue as the dancers perform. The evening got off to a&hellip;

Bridging the Void is an ambitious show with some exciting ideas but it fails to hang together as a coherent multimedia production.

Bridging the Void is a dance, film and music production with choreography by Rachel Johnson. The production combines live dance with original music and footage of a sunrise over Primrose Hill, which is projected onto the back wall of the venue. Audience members are encouraged to walk around the venue as the dancers perform.

The evening got off to a confused start as I learned on my arrival at Rich Mix that Bridging the Void was the second show in a double bill. The front of house staff seemed uncertain as to the running time of the first show (Samba and Tears), in spite of this information appearing on handouts placed inside the performance space itself. Samba and Tears was also fifteen minutes late in starting which meant that I ended up leaving Rich Mix far later than I expected to. This being said, I was impressed with the quality of the venue itself and with how well the front of house staff accommodated my partner’s need for a chair during Bridging the Void.

The performance started in a striking fashion. The audience were invited to walk into the venue in darkness, with dry leaves crunching under foot. The three dancers moved about us erratically, their breathing laboured. This use of sound and touch in an otherwise dark room was effective in building the audience’s anticipation, although the room was arguably left in darkness for too long and I struggled to follow the dancers’ movement due to the low levels of light.

The lighting throughout the show was effective in mirroring the beautiful footage of the sun rising over Primrose Hill. The footage was mesmerising and provided an impressive backdrop to the dancers’ performance. Likewise, the original score was moving and built well with the ascent of the sun in the sky.

Being more of a theatre goer, I had never attended a show where I was invited to walk and move among those performing before. I was nervous as to what to expect but was surprised by how much I enjoyed the interactivity of the show. As the sun rose in the video, the three dancers’ movements became more feverish, with each dancer tearing about the venue with abandon and an apparent spontaneity that belied the impressive levels of control they used to avoid colliding with members of the audience. It was thrilling to not only see but feel someone fly past me at such speed.

While it was great to see Bridging the Void attract a large audience, this impacted on the quality of the show overall. The large audience meant it was hard to keep track of the three dancers as people huddled around them. Likewise, the size of the audience meant that the show felt less interactive and encouraged people to stand in one spot or sit on the floor.

Another weakness of the production was the combination of video and dance. While the video footage in its own right was arresting and there were moments where the dancers’ shadows playing on the screen was effective, I did not think enough was made of the interplay between the different forms of media. Towards the end of the performance, the dancers became stationary and the focus turned to the pre-recorded footage of the three dancers instead. This left the audience uncertain whether to watch the screen or to keep an eye on the dancers in case they began moving again. This disjointed ending meant that the show petered out instead of ending with a crescendo as might be expected given the motif of the sun rising in the sky.

It would be interesting to see this or a similar production in a more intimate space with a smaller audience and more integrated use of video. Without this additional integration, Bridging the Void was enjoyable and ambitious but felt stretched thin over its 45-minute running time.

Previous: The Fifth Column, Southwark Playhouse – Review
Next: Jonny and the Baptists: The End is Nigh, Orange Tree Theatre – Review