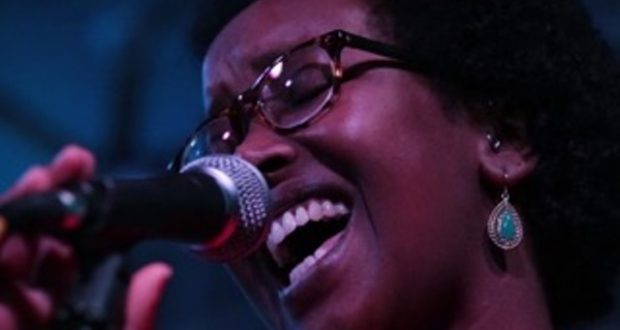 Pros: It’s fascinating to hear Shakespeare read in several different languages. Cons: The framing rationale is confusing and seemed forced. Rich Mix is the model of what a multi-purpose, multicultural hub should be. Cinema, theatre, conference space, gallery, music venue, non-profit arts hub – it's all of those and then some. It is a particular supporter of Spoken Word events – storytelling, performance poetry, literary readings. This Bards without Borders event was billed as somewhere between a gig and a poetry reading – music, poets, and a very special birthday. Poets from all corners of the world, inspired by&hellip;

A worthy idea for a Shakespeare 400 tribute, thwarted by fuss and lack of focus.

Rich Mix is the model of what a multi-purpose, multicultural hub should be. Cinema, theatre, conference space, gallery, music venue, non-profit arts hub – it’s all of those and then some. It is a particular supporter of Spoken Word events – storytelling, performance poetry, literary readings. This Bards without Borders event was billed as somewhere between a gig and a poetry reading – music, poets, and a very special birthday. Poets from all corners of the world, inspired by Shakespeare.

There was a party atmosphere inside Rich Mix’s main space before the start of the show – lots of people milling around and a DJ playing catchy world music. Then a pair of poets – one from Tanzania, the other from London – began the show. Slowly, it became apparent through their heavily Shakespeare-allusive banter that the pair were there to begin a fictional debate about Shakespeare’s worth in modern society. Shovels in hand, these ‘undertakers’ were on stage to symbolically bury a copy of the Complete Works. Contrived? Yes – but had both actors looked more confident about the premise, I would have given it the benefit of the doubt.

Despite some individually compelling work, I kept getting distracted by how no-one quite seemed to know what was going on. Awkward duologue over, the empty stage filled with a group of poets of different nationalities, who proceeded to argue the ‘debate’ for and against Shakespeare’s ‘burial’. The arguers in the ‘for’ camp were, understandably, more confident than the ones in the ‘against’ camp. As the debate progressed, I got increasingly confused – the idea that a group of people who had come to celebrate Shakespeare would vote to bury him was laughably impossible. Some good points were difficult to dispute – Shakespeare’s whiteness and Englishness IS, probably, what makes his birthday more important than that of famous writers from other cultures. Monologues from the points of view of Ophelia (wronged by both Shakespeare and Hamlet) and Rosaline (forgotten by Romeo by the end of the first act of Romeo and Juliet) were funny and true. But the overall impression was of uncertainty and confusion. No-one was more relieved than me when the master of ceremonies came onstage to call an impromptu interval. The DJ struck up again, and the awkwardness was subsumed back into a birthday party vibe.

Everyone was happier when the strutting and fretting of the ‘debate’ was over. Following it were readings from Shakespeare translated into some of the poets’ mother tongues: Hindi, Spanish, Yugoslav, Somali, Swahili, Bangla, Arabic and more. For me, this was the best part of the evening. Each reading was delivered with quiet passion, not just for Shakespeare but for the languages and cultures into which he had been translated too. Contemplative as it was, the reading fit the mode of celebration that the party atmosphere of the interval had begun, more effectively than the posturing of the beginning.

I am grateful that Bards without Borders made me see, more clearly than I had before, that Shakespeare is truly a giant of World – not only English – literature. His works bring people together in a way that transcends traditional ideas of what theatre, or community are. Next time, I hope the organisation puts a little more trust in that power.

Developed and Produced By: Bards without Borders
Booking Information: This show has now completed its run.

Previous: Win tickets to Comeback! The Karl Marx Musical
Next: Closer Than Ever, The Pheasantry – Review