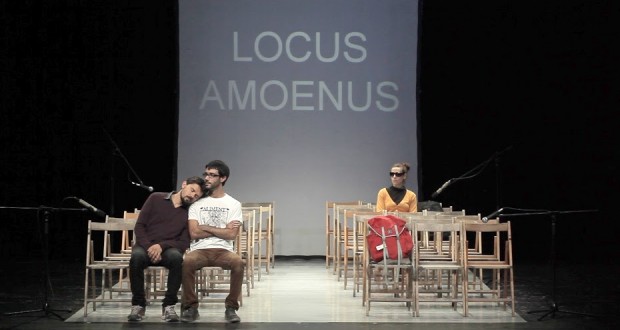 Cons: At some points too many ideas were being thrown on stage all at once, and as a result my engagement switched off – maybe more simplicity next time?
Sprint Festival, Camden People’s Theatre – Review

Pros: Two charming performances with plenty of comedy value. Cons: At some points too many ideas were being thrown on stage all at once, and as a result my engagement switched off – maybe more simplicity next time? Sprint Festival has gotten off to a fierce start at Camden People’s Theatre this season. Filled with a stunning array of vibrant, inviting and quirky new work put together by some of the most exciting and influential writers to recently emerge not just from across the UK, but from abroad too. The theatre is seeking to support aspiring young actors (mostly&hellip;

Sprint Festival has gotten off to a fierce start at Camden People’s Theatre this season. Filled with a stunning array of vibrant, inviting and quirky new work put together by some of the most exciting and influential writers to recently emerge not just from across the UK, but from abroad too. The theatre is seeking to support aspiring young actors (mostly graduates) by giving them a platform upon which to showcase their talent and work. What better place to do so than in this off-the-wall venue, with its Shoreditch inspired interior and laid back bar setting; a space that is filled to bursting with other theatre enthusiasts like yourself.

The night was divided into two short performances that each delved into quite obscure subject matters: Locus Amoenus and My Champion Heartache. They were both tackled with real vigour and wit, which allowed the audience to step back out of their comfort zone and fully engage with what was happening from beginning to end.

The first performance of the evening was Locus Amoenus from company Atresbandes: a piece exploring the unnerving prospect that we are all in fact mortal and can be taken out of this game we call “life” at any moment. Although likely to be considered depressing on paper, the cast dealt with this issue with a subtle comedic flare. We were presented with three people on a train, going about their daily lives oblivious to the fact that they would not make it to their final destination. It was eye opening to see a snapshot such as this in the theatre; in our real-life experience loud music blaring out of someone’s headphones, or someone leaning over our shoulder to read a passage of our book seems more of an inconvenience than a chuckle. As an observer to these quotidian moments however things looked entirely different – it was comedic genius.

Without a doubt the pinnacle of the play’s comedy was the character of the lone women, wearing sunglasses although on a train (don’t you just hate those people), who unzipped every part of her rucksack again and again. Thus turning a moment of inconvenience for her into a deliberate act of amusement. Let me tell you the audience were in stitches, and that just sums up the performance in a nutshell in my opinion. Although revolving around the unpredictability of death the show was somewhat light-hearted, funny and at some moments bewildering. Simple staging of just five rows of chairs and a projector ensured the piece focussed solely on the actors – there were no gimmicks.

The latter performance of the night, My Champion Heartache, dealt with a completely different topic, and one that perhaps became a little obscured throughout the piece: the connection between pets and their owners. Again with only a simple stage set-up the two female leads energetically swept across the stage, engaging freely with the audience and treating them like creatures of interest. Pointing out our curls, scruffy hair and a whole number of other visual attributes that we ourselves do not habitually consider. Funny really as the piece somewhat turned this idea that we have of pets being things of interest back around to us as the owners.

Audio recordings were played throughout, giving the audience a brief introduction to the action taking place on stage. I am personally not one for animals on stage but I found myself drawn to the live turtle brought on mid-way through the performance. It was interesting to see how it reacted to the situation and even more so when presented with large helpings of lettuce in front of it! Although the piece was a little muddled at points and as a result hazy to follow, it did capture a light-hearted cheerfulness which is impressive considering the short length of the play.

Overall a nice night out and one in which I could sit back, relax and watch some jolly good theatre from the comfort of a quirky little Camden theatre.

Previous: Party!, Pleasance Islington – Review
Next: Pedro and the Captain, The Vaults – Review