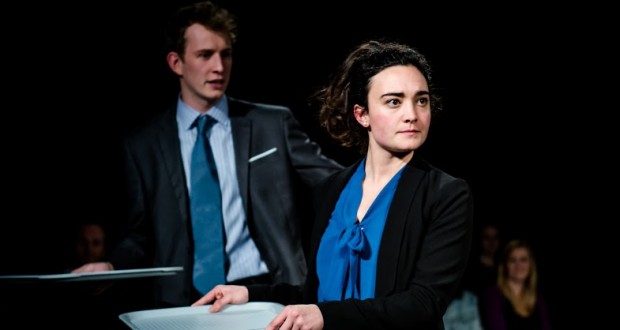 Pros: Strong performances and a powerful script with a thought-provoking plot.

Pros: Strong performances and a powerful script with a thought-provoking plot. Cons: A few technical glitches (with minimal impact). I love the New Diorama Theatre. Situated just off Regent’s Park, this contemporary theatre is slowly getting a name for itself as the go-to venue for showcasing new and emerging talent. RUN, the second production from the incomparable Engineer Theatre Collective, is a shining testament to this venue’s ethos. Inspired by the tragic true story of Moritz Erhardt, the 21 year old bank intern who was worked to death (literally!) after working 72 hours straight, RUN is a play that&hellip;

A strong and united ensemble shed light on the darker unknown side of investment banking.

I love the New Diorama Theatre. Situated just off Regent’s Park, this contemporary theatre is slowly getting a name for itself as the go-to venue for showcasing new and emerging talent. RUN, the second production from the incomparable Engineer Theatre Collective, is a shining testament to this venue’s ethos.

Inspired by the tragic true story of Moritz Erhardt, the 21 year old bank intern who was worked to death (literally!) after working 72 hours straight, RUN is a play that pulls no punches. Developed in conversation with many working in the jungle of the financial sector, RUN is hard hitting from the get-go. It focuses on four interns – Caroline, Ana, Tim, and Lawrence – all competing for one job. Each a protagonist in their own right, these four characters are beautifully portrayed by one of the strongest ensembles I’ve seen in a long while. From showing the nerves and naivety of their first day to the true terror of the big banking pressure cooker, these performers are an acting tour de force. The one thing that struck me was that we all know, or may have even once been, one of these types of characters.

Caroline, with her figure to die for and killer heels, is beautifully portrayed by Charlotte Watson. Caroline is a determined grafter yet, unlike her fellow interns, is socially awkward and throughout Watson’s stellar performance I really felt for her. Ana, the steadfast and cast iron bitch, is played to perfection by Gabriella Margulies. As the drama unfolded in the round, Margulies would often end up standing right in front of me which I loved as she was focussed and totally absorbing.

I found the men a bit annoying, but in a good way. Tim is wet behind the ears and doesn’t know if he’s in the right industry. Lawrence is the spoiled, but massively insecure brat who only got the internship due to family connections. Both Joseph Sentance as Tim and Al Jarret as Lawrence had such stoic realness in their performances that I found myself constantly wanting to jump on stage to either hug or punch them. The four actors poured across the stage like money spewing out of a broken ATM and it was a delight.

Engineer Theatre Collective productions are broadly influenced by the philosophy of Jacques Lecoq, which relies on abundant physicality to interpret text. This was evident throughout RUN, the dance scenes in the club and the more humorous scenes in the claustrophobic lift being personal highlights. As the internship started to descend into darkness I slowly realised, that much like the tragic Moritz Erhardt, this play may not end well. I had the pleasure of taking my work wife as my plus one and I loved how the two of us couldn’t work out if someone was going to die and more importantly who it was going to be. The outcome is beautifully poignant.

The direction, under the watchful eyes of Jesse Fox and Simon Lyshon, is imaginative and fast paced. In parts I saw the stage as a clock and from running to meetings, or running to bed, the ensemble were always trying to beat it. Sound and lighting, spearheaded by Dominic Kennedy and Oscar Wyatt, also played a crucial role in bringing this drama to life and they complimented one another well. However I did find some of the sound effects, like the chirping birds, a bit distracting at times. All exits of the auditorium were used, props brought on and taken off creatively and there was great use of tension and suspension, which all resulted in a juggernaut of 80 minutes of drama.

I urge you to RUN to the New Diorama Theatre to see this production as it’s distressing, funny (yes you do laugh!) and painstakingly accurate.