Home » Reviews » Drama » Consequences and The Book, The Space – Review 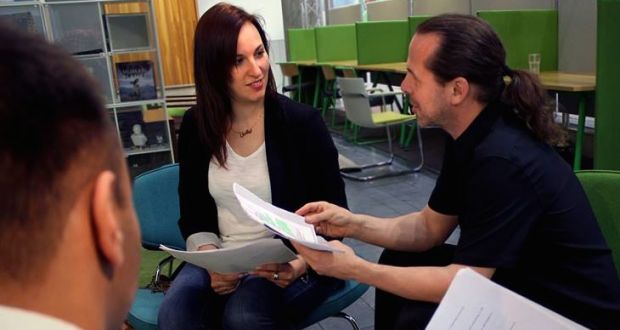 Consequences and The Book, The Space – Review

Cons: The sometimes poor sound quality combined with the limited lighting make the narrative difficult to follow at times.
Consequences and The Book, The Space – Review

Pros: Very promising scripts with dedicated performers, set in a well-suited performance space. Cons: The sometimes poor sound quality combined with the limited lighting make the narrative difficult to follow at times. I’ve always enjoyed my theatre experiences at The Space. The Hubbuh café and bar above the theatre is the perfect place to enjoy a pre-show drink and the box office staff are always on hand to provide you with a warm-friendly welcome. The Space is a small theatre, transformed from an old church. The playing space is intimate, yet versatile and perfect for any form of performance.&hellip;

I’ve always enjoyed my theatre experiences at The Space. The Hubbuh café and bar above the theatre is the perfect place to enjoy a pre-show drink and the box office staff are always on hand to provide you with a warm-friendly welcome. The Space is a small theatre, transformed from an old church. The playing space is intimate, yet versatile and perfect for any form of performance. It’s indeed very suitable for KinkyFish production company’s performances of Consequences and The Book.

The evening begins with Consequences, which offers a timeline of two police officers (Rajan Sharma and Jon Carstairs) who stumble upon the ‘suicide note’ of a Mr Norman Watkinson (Pete Picton). The ‘note’ reflects what felt like a lonely man’s journey to finding solace in his final moments. The performance is generously narrated by Norman himself, while he flits in and out of his fascinating relationship with a female lodger he took in some time ago. The actors give a very satisfying portrayal of their characters’ personalities and moral standards at the time of the police investigation. Picton shows the deterioration of his character’s well-being and mental health subtly, yet effectively. Unfortunately, the performances are dense at times, and I found myself struggling to understand the various characters’ paths through the piece. The setting of Norman’s kitchen is the perfect place for this play to take place, yet due to the staging and the arch at the back of the space, the sound was often lost. This made it difficult to hear the text and follow the storyline.

The second half of this evening is a performance of The Book. Although using most of the actors from the first play, this script is very different from the other, enabling us to see two very different styles of writing and performance. The Book is essentially the tale of two strangers (Michelle McKay and, again, Sharma) given the ability to discover themselves in a very unusual setting. Tied and bound, these two have only each other to talk to and to trust, even though they’ve never met before. The initial staging features dark cloth, two wooden chairs and scattered sand on a dimly lit floor; it’s the setting for what you would expect to be an unpleasant journey. To me, this production felt like a social experiment for both the audience and the characters. At many moments during the play each audience member reacted differently, showing a variety of personal interpretations. This also goes for the characters: having been thrown into the same situation, both deal with it in very different ways.

Sharma also played one of the police men in Consequences. I found his performance in The Book the most intriguing and found the second half of the evening to be his strongest performance. Having said that, performances from other cast members made it difficult to distinguish a difference in characters between the two scripts. The dimness of the lighting wasn’t helpful either, as it was at times challenging to actually see the actors. Nevertheless, with this play focussing on body language and thought process, and the other on dialogue, the evening as a whole is a great showcase of playwright Duncan Battman’s extensive writing skills.

Both of these pieces feel like they would benefit from fresh ideas to keep evolving, but even they are, Consequences and The Book are very promising and exciting new pieces of theatre.