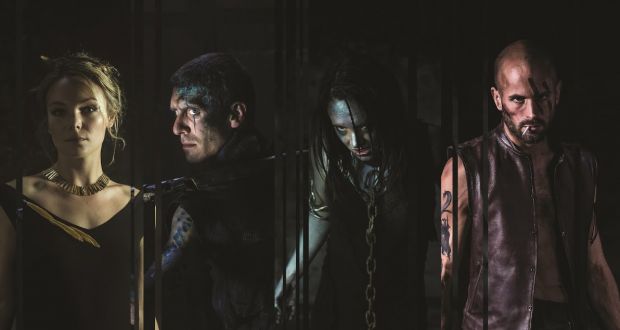 Pros: The show’s imagination, creativity and atmosphere are outstanding examples of how to bring a classic to life.

Cons: Some may find the flashing lights, loud metal music and smoke a bit much.
The Odyssey, Wilton’s Music Hall – Review

Pros: The show’s imagination, creativity and atmosphere are outstanding examples of how to bring a classic to life. Cons: Some may find the flashing lights, loud metal music and smoke a bit much. Wilton's Music Hall is a charming piece of history. It is the oldest surviving music hall in the world and its exposed and crumbling bricks, distressed walls and creaky floorboards make it the perfect venue for a classic piece of art to come to life in modern form. Choreographer and director Mark Bruce has taken Homer's epic poem The Odyssey – originally written around 800 BC and&hellip;

Quite simply, Mark Bruce's production is beautiful, moving and epic.

User Rating: Be the first one !
Wilton’s Music Hall is a charming piece of history. It is the oldest surviving music hall in the world and its exposed and crumbling bricks, distressed walls and creaky floorboards make it the perfect venue for a classic piece of art to come to life in modern form.

Choreographer and director Mark Bruce has taken Homer’s epic poem The Odyssey – originally written around 800 BC and telling the story of Odysseus’ arduous journey home from the Trojan war to a wife who has suffered in his absence – and brought it to life in a phenomenal display of dance. Bruce stamps his own mark on the story with a deep, artistic and moving production, with its heartin classical times but its emotions and subtle commentary on the effects of war firmly in the now.

The dance is faultless and relentlessly entertaining. It’s modern and classic all at once, a theme that echoes wonderfully throughout every inch of the performance. The show opens with a team of skeletons doing an eerie synchronised dance to Tom Waits’ Bad As Me, but classical music plays a major role in the show as well; another highlight is a haunting and visually stunning operatic lip sync to Mozart’s Laudate Dominum. None of the music is a safe choice – and that’s a very good thing.

There is just as much beauty in the stillness of the show as there is in the movement. The lighting and staging is an absolute masterclass in evoking atmosphere. There are moments, poses, held just long enough to show strength and allow a thoughtful pause. Strong use is made of fog machines and back lighting; the way things appear and disappear on the stage is stunning. Similarly impressive are the ways in which sea travel and ships are represented.

It is worth attending for the production’s creativity alone. There is a breath-taking way of marking Odysseus’ time away from Penelope to which Hannah Kidd, as Penelope, brings an incredible intensity. As she is marked by the passing of time and the weight of Odysseus’ absence takes its toll on her, her emotional range is excellent. Watch her eyes flare after the final mark is cast; she isn’t the same woman any more. She similarly excels in a later scene when she mundanely embroiders a tapestry and then releases a storm of inner torment. Don’t take your eyes off of her for a second.

Terrific dancers fill all the roles. Christopher Tandy as Odysseus is a delight to watch as he devolves from a husband and soldier to a man destroyed and haunted by war, walking the tightrope between hero and savage. Christopher Akrill’s Immortal Man and Eleanor Duval’s Immortal Woman are impossible to ignore as they weave their way through space and time, sometimes observing, other times twisting and turning the narrative. Duval is a malevolent force and dances with strength and conviction but she also has an interesting vulnerability when it suits.

This is, without question, the best interpretation of The Odyssey I have ever seen. Some creativity is deliberately used to adapt the traditional story but this both enhances and fleshes out the characters. A scene featuring Santa is odd but somehow when hints of it are revisited in the triumphant finale, it comes together nicely. This show makes a classic completely communicable to modern audiences and does so in a unique and beautiful way. This is top-notch artistry and, truthfully, it does justice to the word ‘epic’.