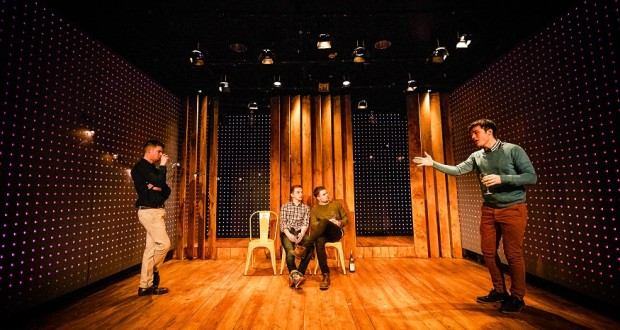 Pros: The show is fast paced, full of laughs from almost start to finish, and has a script that balances humour with plot.

Cons: I spent some time wondering if there was a special significance to the fact the show is about two gay couples, and if I had perhaps missed a major part of the message.
Four Play, Theatre503 – Review

Pros: The show is fast paced, full of laughs from almost start to finish, and has a script that balances humour with plot. Cons: I spent some time wondering if there was a special significance to the fact the show is about two gay couples, and if I had perhaps missed a major part of the message. Finding myself back at Theatre503 just a few weeks after the brilliant Clickbait, it was difficult not to have that play in my mind even as Four Play begun. It's even more difficult not to want to compare the two, when both&hellip;

A fun play which takes a modern approach to the subject of relationships in the 21st century. It rarely flags as it flies through its 80 minutes.

Finding myself back at Theatre503 just a few weeks after the brilliant Clickbait, it was difficult not to have that play in my mind even as Four Play begun. It’s even more difficult not to want to compare the two, when both examine the mutual themes of sex and relationships. Thankfully the approach of both plays are so different that within a few minutes of the start, it felt unfair to be too critical of one over the other.

Just the title alone signals the play’s direct approach to its subject. It’s also an indication of the clever word play that’s sprinkled throughout the fantastically written script. There’s enough subtle, and some not so subtle, innuendo to keep the audience laughing throughout. In fact, one audience member, who was seated right on the front row, was laughing so loud I was sure he would eventually put off the actors mere feet in front of him. To their credit, however, they didn’t seem to miss a beat.

Playwright Jake Brunger clearly wanted the pace to be high; one of his notes says to ‘get to the next line quickly’, an instruction the four actors certainly take to heart as they fly through the script. Director Jonathan O’Boyle has found just the right balance: he keeps things moving, but at the same time the show is not so fast you struggle to keep up.

The opening scene sets this tone perfectly. It’s dominated by a monologue from nervous Rafe, whilst his partner Pete and their mutual friend Michael simply sit by, watching him talk endlessly. It’s certainly a long speech, and whilst it is only Rafe we hear in the opening minutes, the writing and physical interaction help things flow smoothly. Pete’s facial expressions alone almost steal the whole scene, which would have been a travesty after all Rafe’s hard work in delivering the speech in such style.

This opening monologue also lays out the themes of the play: sex and relationships. One couple feel they are missing out on something due to their inexperience, whilst they compare themselves to the second couple that seems to have it all, with their loving relationship and their seemingly ideal approach to sex. Of course, as the play hurtles through the scenes, it’s clear that all is not rosy for any of them, as the truth of their private lives are laid bare to each other. At this point I did get slightly distracted, however, by some questions that sprung to mind. Was the fact the play shows two gay couples relevant? Was it Brunger’s purpose to explore gay relationships specifically, or did he simply decide to set the show that way? I spent some time pondering whether I was missing a vital part of the message, but quickly decided that it probably didn’t matter: gay or straight couples, the story would surely be the same.

Only once, as the play heads towards its conclusion, does the pace dip. With both couples going through their respective crises, the laughter dies along with the momentum. It may have been a deliberate choice to allow extra time for the more dramatic scenes, but it does briefly let the play down. The change in tone feels wrong after the previous speed and humour. Thankfully though, things quickly recover for the finale as we glimpse the future for our couples. It’s a nice, touching ending that demonstrates how relationships can develop, and how wanting what you think others have isn’t the answer in the end.