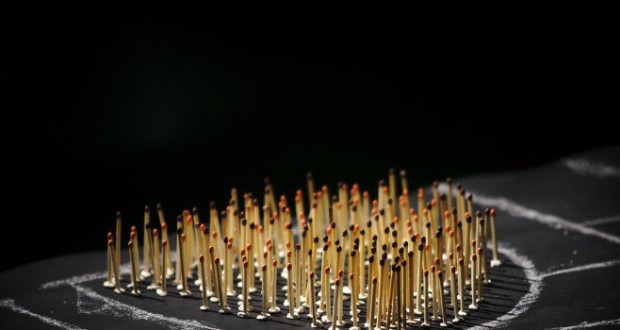 Pros: There was an interesting character construction exercise, and the format encouraged creativity.

Pros: There was an interesting character construction exercise, and the format encouraged creativity. Cons: Three hours in a windowless basement failed to explore London’s current housing crisis. The Lowland Clearances was billed as "a live action role play (larp) game about housing, social cleansing and a sense of community." The game was set in 1850s Camden and the purpose was to draw parallels between the housing crises in early Victorian and today’s London. Indeed, Hobo Theatre’s production was part of Camden People’s Theatre’s festival, Whose London is it Anyway?, which was designed to explore the changing face of our city.&hellip;

There were some fun creative activities, but this suffered from slow pace, lack of thematic development and an unfortunate venue.

The Lowland Clearances was billed as “a live action role play (larp) game about housing, social cleansing and a sense of community.” The game was set in 1850s Camden and the purpose was to draw parallels between the housing crises in early Victorian and today’s London. Indeed, Hobo Theatre’s production was part of Camden People’s Theatre’s festival, Whose London is it Anyway?, which was designed to explore the changing face of our city. However, discussion of today’s issues was non-existent. While we did play a fairly entertaining Victorian game, a few of us were disappointed that the production didn’t quite match what we’d been sold.

I had never been to a larp before but had enjoyed a couple of immersive shows, so I thought I’d give The Lowland Clearances a go. The idea of returning to the childhood days of make-believe games remains thoroughly enticing, but I’m just not sure that this production was the best example of drama-based larping.

That afternoon I spent three hours in a windowless basement. Upon walking into the venue we found piles of rubbish and random objects on the floor. We were first asked to build a monument in the centre of the room. I still don’t really know what the monument was for, as we never discussed its purpose. We then constructed our homes in various colour-coded ‘districts’ around the basement’s edges. These districts provided an effective mechanism for imaging our various characters’ neighbourhoods.

As you can tell, I found the production a bit of a mixed bag. I arrived ready to throw myself into the game and, happily, so did my fellow theatre-goers. I did quite enjoy myself for the first hour and a half. I particularly liked the method we used to build the relationships that linked our various characters. We formed circles and picked a fellow player to describe their own character’s relationship to ours. It was fun and imaginative. The fact that we had to rely on other players’ conceptions of our character encouraged greater creativity.

After a while my engagement did begin to wane. While we did get a break in the middle, a total of three hours in a windowless basement did begin to take its toll. I found the lack of natural light just a little disorientating and did, at one stage, pop upstairs to have a quick look at the sky. That said, during the break-out session at the end (I have learned that it is traditional to have a group de-brief following a larp), a few attendees commented that they would have liked more time to make group decisions, so perhaps my objection to the length is just a personal opinion.

Though the length was not the only issue I had with the game’s pace. I think a little oomph could have been injected into the proceedings. For example, we enacted a number of nights and days, which dragged a little. Had a few of these ‘sleeps’ been cut out, we might have avoided some of the stagnation. Here, the game would have benefitted from a little more commentary from the facilitators. I felt as though the lead-facilitator should have recapped the story’s progress and discussed some of the issues we had raised before moving onto the next segment of play. Instead, he largely stuck to reading from his clipboard. And the lack of thematic discussion contributed to the production’s failure to explore housing crises in any depth.

The Lowland Clearances had some fun elements and succeeded in encouraging creativity in a group of adults, many of whom had never participated in larp theatre before. However, the production failed to explore past and present housing crises in any real depth. There were a few issues with structure and venue, which meant that my enjoyment waned after the first half of the production. That said, a number of the participants seemed to have really enjoyed the whole experience, so do remember that my waning enthusiasm was influenced by personal taste too!