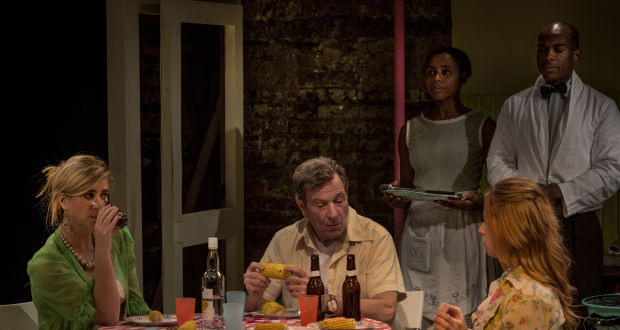 Pros: Laugh-out-loud lines, razor-sharp wit and a splendid cast. Cons: With its light touch on the subject matter this piece breaks little new ground. The sweltering expanses of the 1960s’ American Midwest is a long way from a bustling and chilly Islington in 2016, but Sarah Berger’s production of The Long Road South does an admirable job of closing the vast gap. We’re dropped into a world we’ve seen represented in drama numerous times; further south, the civil rights movement is in full swing. Paul Minx’s play is set at one remove from its political subject and focuses on the&hellip;

A solid, well-made play that may not stay with you for long, but will have you rolling in the aisles while you’re watching.

The sweltering expanses of the 1960s’ American Midwest is a long way from a bustling and chilly Islington in 2016, but Sarah Berger’s production of The Long Road South does an admirable job of closing the vast gap. We’re dropped into a world we’ve seen represented in drama numerous times; further south, the civil rights movement is in full swing. Paul Minx’s play is set at one remove from its political subject and focuses on the domestic and personal tensions that the rapidly changing times brought to households. First seen at the Hope Theatre in 2014, this 90-minute play is back at the King’s Head pub theatre with its original and illustrious cast.

Andre and Grace have spent the summer working in good faith as domestic help for the Price family. Now, on a languid afternoon and evening – the couple’s last day of service before they head south to join the Civil Rights Movement – the shock of the change wreaks havoc on everyone. Andre and Grace need paying for their services, while the Price’s teen daughter Ivy, played with the flare of a firecracker by Lydea Perkins, is ready to deploy all her devastating wiles to stop stoically handsome Andre, with whom she is deeply infatuated, from leaving.

The unravelling and revealing of strained relationships is tightly plotted and thoroughly enjoyable, and there are some moments of tension that reveal the true horror of the racial politics of the time, but overall The Long Road South does little to add to the understanding of its political subject matter. The characters, too, come with a wealth of private pain that remains largely unexplored. Carol Ann, the family’s alcoholic matriarch, is haunted by the institutionalisation of a son and beneath Ivy’s sexual precociousness we sense genuine despair at the inert future stretching out ahead of her. It all remains background noise however, in a play built around the playwright’s dazzling dialogue.

The stellar cast wrings every last laugh from their lines and comedy from their character, so belly laughs abound. Imogen Stubbs, as Carol Ann, wafts around the stage, thoroughly squiffy, vacillating from fabulous to tragic and from kindly to cruel on a word, her slip forever in danger of slipping off. Michael Brandon, as her brutish husband Jake, does a fine line in the kind of pathetic masculinity wracked with fear of a new world where respect, superiority and affluence are no longer a given. Cornelius Macarthy’s Andre is dignified and beautiful, yet humanly flawed in his own fear of change, which means him having to man up and be a father to his estranged daughter.

The simple set by Adrian Linford is pleasantly restrained, suggesting enough of the world we’re entering to add to the actors’ character work rather than distract from it, while Kevin James’ lighting bathes the scene in the orange glow of relentless, battering heat. Overall then, The Long Road South is an excellent play that is well worth a few hours of your time, although it falls frustratingly short of real greatness.