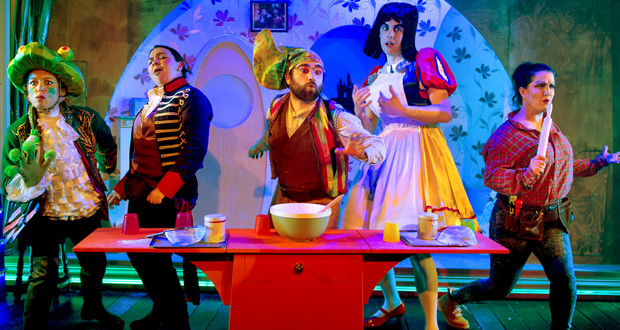 Pros: Many. But the puppet backing singers will stay with me.

Pros: Many. But the puppet backing singers will stay with me. Cons: That’s probably a question for the punter who got pied. Any show that opens with a dig at the Garden Bridge doesn’t have to do an awful lot more to earn four stars from me. But for those who expect their panto to do more than just satirise the overpriced and dodgily-procured vanity projects of the rich and famous, Charles Court Opera’s Mirror Mirror does have plenty else to recommend it. The show is billed as a ‘boutique panto’, and like the best boutiques it is full&hellip;

A very funny and accomplished panto that wears its cleverness lightly.

Any show that opens with a dig at the Garden Bridge doesn’t have to do an awful lot more to earn four stars from me. But for those who expect their panto to do more than just satirise the overpriced and dodgily-procured vanity projects of the rich and famous, Charles Court Opera’s Mirror Mirror does have plenty else to recommend it. The show is billed as a ‘boutique panto’, and like the best boutiques it is full of high quality content, with everything in just the right measure.

Larry Black, Prince of Pretzel, loves Snow White. The evil Queen wants Larry and his money for herself. Snow White fears that to love Larry would be to betray her late, lamented husband, Barry. Guided by her malevolent mirror, the Queen determines to kill Snow White.

John Savournin has written a wonderful script that has cracker-jokes, topical gags, puns, rhyming couplets and a tone which, in this all-ages version, is saucy rather than lewd. It also manages to be good-natured and even heart-warming; the Prince is a sincere chap, Snow White’s an honest lass and even the Queen has a heart under that black satin corset.

It’s a script that’s not wasted on the six brilliant performers, who milk it for every single laugh. Matthew Kellett plays all seven dwarves, diving off stage as one, only to reappear seconds later as another, with different accessories, accents and attitudes. Savournin’s enormously tall Snow White is slightly less camp than the term ‘dame’ implies; with her shiny red Mary Janes, lurid frock and collection of elaborate, sometimes symbolic, hair ornaments, she owes something to Grayson Perry. It is a really impressive piece of ensemble work, in which all five of those on stage contribute in equal measure.

Much credit should also go to William Fricker and Mia Wallden, for set and costume design. Fricker’s set is one of those lovely creations that keeps on surprising, with doors and windows suddenly opening in unexpected places, and fantastic Tom and Jerry-style booby traps. Wallden’s costumes are a glorious mix of the flamboyant and the totally daft. Andrea Tweedale’s Queen is over-the-top in a figure-hugging rhinestone gown, while the character of Amy J Payne’s Prince is evoked with an outsized codpiece and a pencil moustache; and poor Nichola Jolley spends at least half the show wearing a comedy cycle helmet.

It is hard to single out any element of this show that contributes more than others; every part is brilliantly conceived. However, it is the music that really differentiates it from other pantomimes. The on-stage cast are all trained opera singers, and there’s a song every five minutes. Michael Jackson, Prince, Elton John and more are all given David Eaton’s panto-opera treatment. Baking instructions are sung to the tune of ‘Uptown Funk’, a Queen classic becomes ‘I’ve got to make tea’ and there is a very impressive five person medley of songs. Savournin’s lovely baritone is delightfully incongruous with the character of Snow White, and could almost tempt me into an opera house.

When the cast come out to take their bows, Matthew Kellett is accompanied for the first time by the other dwarves, in puppet form. It is a last-minute bonus gag that doesn’t really need to be there, but combined with the cast singing right through the curtain call, it sums up the generosity and fun of this very enjoyable show.