Pros:  Funny from start to finish, with a cast able to adlib their way out of any of their numerous errors, which simply adds to the entertainment.

Cons: Audience participation is part of panto, but at times the audience seemed to have full blown conversation oblivious to the show or those around them.
Kitten in Heels, Lost Theatre – Review

Pros:  Funny from start to finish, with a cast able to adlib their way out of any of their numerous errors, which simply adds to the entertainment.   Cons: Audience participation is part of panto, but at times the audience seemed to have full blown conversation oblivious to the show or those around them. I hadn't been to a pantomime for a long time – and when I say long, let's just say it goes well into the last century! So I approached Kitten In Heels with some trepidation.  My concerns were offset slightly by the great venue. Spacious leg room, soft seats and enough banking that you'd see even if&hellip;

It might be labelled as adult, but don't let that put you off. The adult nature is just some dodgy innuendo and colourful language, but nothing that should cause much offence to anyone willing to give it a try.

I hadn’t been to a pantomime for a long time – and when I say long, let’s just say it goes well into the last century! So I approached Kitten In Heels with some trepidation.  My concerns were offset slightly by the great venue. Spacious leg room, soft seats and enough banking that you’d see even if the world’s tallest man was right in front of you.  And this is the first theatre I’ve been in that even had a bar in the actual auditorium itself, open during the whole show. Again, an indication of what to expect.

To get my gripes over early, the relaxed feel of the night meant conversations were going on around me that were unnecessary and distracting. It might be panto but I do feel it’s rude to talk over the actors onstage.  And with the above mentioned bar, people were moving around, causing more unneeded distraction, maybe some softer closing seats would have helped a little here. But others might argue this all just adds to the relaxed playful feel of the whole event.

Kitten In Heels is Excess All Areas’ 15th annual pantomime, so  they clearly know what they are doing.  Writer, director and dame Paul L Martin, understands the rules of good panto. There are corny songs, even cornier jokes, subtle innuendo, and then some less-than-subtle innuendo. Most of the time it works.  There’s a scatter gun approach to many of the jokes, their references at times a little too obscure, based on things from early in the year that are easily forgotten.  But this really doesn’t matter, the jokes are thick and fast and even if one misses its target, the next generally works.

The songs have a very 80s edge, maybe an indication of the writer’s age more than anything else.  In fact the highlight of the night is second half’s opening number.  I doubt I will ever be able to hear  Starship’s “We Built This City” again without now hearing “We wrote this panto on Prosecco.” It gives the seven strong cast the chance to perform their hearts out, passing a bottle around between them.  I have a feeling it may not have been empty either given how the script errors grew in the second half.  But again, these errors just led to more fun as they ad-libbed their way through it.

While the whole cast gave great performances, special mention should go to Becky Finlay-Hall and Jamie Anderson.  Finlay-Hall adds a little class and elegance as Puss, a kitten who clearly feels she is a cut above the rest.  Anderson manages to hold it all together even when delivering some of the most terrible, but funny, innuendo, especially when playing off Martin’s panto dame.  And his excursion into the audience seeking out more alcohol was a sight that I might never forget. I’m sure the girl whose drink he poured all over his naked chest won’t either.

Kitten In Heels does what it sets out to do – be a great adult panto.  The adult element is innuendo and colourful language, nothing more, and so shouldn’t be a reason to be put off.  And while it’s clear the cast are having as much fun as the audience, it’s also obvious they take the show seriously and make sure we are kept entertained all evening.

Previous: You For Me For You, Royal Court Theatre – review
Next: No Villain, The Old Red Lion Theatre – Review 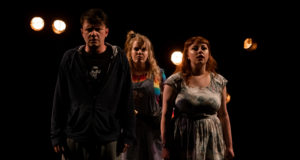