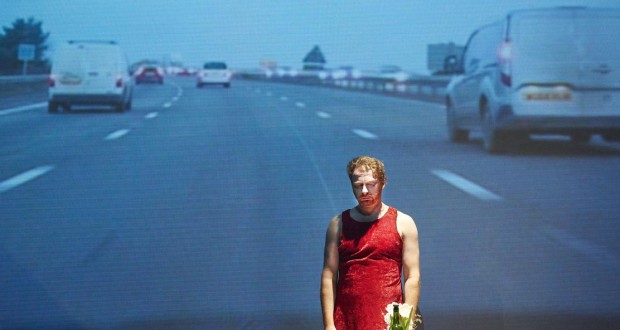 Cons: Offensive, grotesque, appalling… Not for those of a sensitive disposition!
Kim Noble: You’re Not Alone, Soho Theatre – Review

Pros: Provokes a fascinating post-show discussion. Cons: Offensive, grotesque, appalling… Not for those of a sensitive disposition! Kim Noble is many things, but if I had to pick a top five, 'funny' wouldn't make the cut. Although there is laughter in this hour of madness, it's more often the nervous, embarrassed kind of laughter that covers up feelings of extreme discomfort than the tummy-aching, joyous laughter you might expect from a comedy show. But being simply funny isn't his top priority either. Noble pushes his audiences well out of their comfort zones, whether that’s with a video of him&hellip;

A brazen, clever and deeply unsettling study of loneliness and the nature of human existence.

User Rating: Be the first one !
Kim Noble is many things, but if I had to pick a top five, ‘funny’ wouldn’t make the cut. Although there is laughter in this hour of madness, it’s more often the nervous, embarrassed kind of laughter that covers up feelings of extreme discomfort than the tummy-aching, joyous laughter you might expect from a comedy show. But being simply funny isn’t his top priority either. Noble pushes his audiences well out of their comfort zones, whether that’s with a video of him shitting in a church, or confronting us with the loneliness of elderly existence. Which is worse? That’s for you to decide.

Noble pulls a range of stunts, such as dressing up in a B&Q uniform and pretending to work there for over a year, but his methods are questionable. It raises a host of ethical questions about what is and is not acceptable in the name of entertainment. Yes, it’s sort of funny to watch the way he invades other people’s lives, but is it okay to secretly film them and put them on display for a laugh, without their permission? Or is that just nasty? Noble is the master of pushing the limit of acceptability, and for some people this show goes way, way, way too far.

However, if you can ride it out, You’re Not Alone contains some acute observations of interaction and the secret lives of other people. Initially the lorry driver who just wants to send dirty messages to other men’s wives feels like a valid figure of ridicule, but as the show draws to a close we unexpectedly start to feel sympathy for him. Noble’s obsession with Keith the checkout guy feels ridiculous and invasive at first, but we begin to see clumsy attempts at kindness and connection that make the show almost… dare I say it… heartwarming?

The absurdity of much of the show is what makes it funny, but there is a deep undercurrent of sadness running throughout. Whatever Noble attempts, whether it’s taxidermy, getting a job or finding friendship, he seems to fail. He sacrifices himself along with his cast of unwitting ensemble characters. There seem to be no limits to what he will give to the show. We see him both physically and emotionally vulnerable – a lonely man reaching out for reassurance and connection in unorthodox ways.

It is a challenging show on many levels and it will divide audiences. I can’t decide if I love it or hate it, whether I think Noble is a madman or a genius. Nevertheless, it’s still on my mind three days later (albeit like a terrible dream) and that, for me, is the sign of an excellent show.

Marni is studying for a masters degree in creative writing. When she's not working, studying, writing her novel, reviewing theatre or producing with Mind Your Head, sometimes she gets to sleep! Her lifetime ambitions are to win the Booker Prize and find an extra eight hours a day, so she can fit in more activities. She particularly likes thought-provoking theatre that questions what it means to be human. One day she hopes she'll see a play that will reveal the meaning of life. Not asking for much at all...