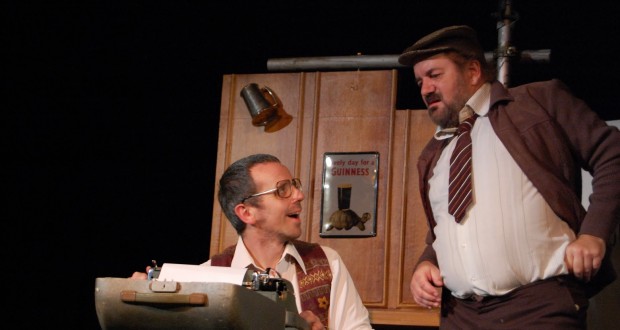 Pros: A dramatic triumph, this brilliantly written and well directed play had us fixated from the minute we walked in the room.

Cons: We were seated at the side of the stage a few rows back and our view was very restricted. Get there early and nab a seat facing the stage.
United We Stand, CLF Art Café – Review

Pros: A dramatic triumph, this brilliantly written and well directed play had us fixated from the minute we walked in the room.  Cons: We were seated at the side of the stage a few rows back and our view was very restricted. Get there early and nab a seat facing the stage. I have to admit that our expectations of this play were pretty low. A piece of political theatre about the trade unions of the 1970’s, staged in an old warehouse in Peckham on a cold rainy Monday night did not fill our hearts with joy. We came straight after work&hellip;

An engaging, funny and thought provoking piece of political theatre that incorporates drama, song, physical theatre and puppetry to educate you about an appalling miscarriage of justice in Britain's history.

I have to admit that our expectations of this play were pretty low. A piece of political theatre about the trade unions of the 1970’s, staged in an old warehouse in Peckham on a cold rainy Monday night did not fill our hearts with joy. We came straight after work having dashed across London to narrowly get there on time. Once we’d tramped up four flights of stairs (definitely not one for people with mobility problems), we arrived to find almost all the chairs were taken, apart from some at the side with a really restricted view; side on, backs of heads, big pillars in the way. So far so bad.

We took our seats nonetheless and focussed on the stage where one of the actors (William Fox) was chatting away to the audience in character, amusing people whilst we waited for the last of the stragglers to arrive. He was so funny, inviting and engaging that we quickly forgot our misgivings, craned our heads and gave ourselves to the action. Once the last person was seated the show began. At this point the second actor – and writer of this two-man play – Neil Gore came onto the stage and both performers burst into song, strumming along on guitars.

United We Stand is the story of Des Warren, Ricky Tomlinson (who later went on to become a renowned British TV actor) and a group of men dubbed ‘the Shrewsbury 24’ who were all builders and part of the strike action against bad conditions and poor pay in the then largely unregulated British building trade of the early 1970s. The play focuses on this group who formed a ‘flying picket’ travelling the length of the country, instigating other builders to down tools and support the strike.

The strike was successful in gaining the increase in salary that the builders demanded but it came at a huge personal cost to some of the members of the flying picket. The builders strike came soon after the 1970’s coal miner’s strikes were resolved, and the then Tory Government alongside the large building firms were keen to smash the strikes amongst the building trades by making an example of the flying picketers they managed to identify. The play focuses on this story in the first act, the second act moving onto the trial of the Shrewsbury 24 and the subsequent miscarriage of justice that the group experienced.

All this sounds pretty depressing, and in essence obviously it is, but somehow Neil Gore’s play manages to remain funny, positive and engaging throughout thanks to his creativity and wit. Both Gore and Williams’ performances are outstanding all the way through as they embody multiple characters; a variety of builders; corrupt businessmen; politicians; judges and police officers are all delivered with incredible energy and passion. They are both extremely multi-talented performers who acted, sung and played the guitar whilst moving the set around to unveil all kinds of cleverly designed props.

The set was simple but very effective with scaffolding hoardings that spun around to become offices, court rooms and a pub. A few simple set pieces were used to great effect – such as crates that were used as musical instruments, the docks in court and the basis of a Punch and Judy style prop.

Simple costume pieces and clever changes were also used to great effect to signify all of the different characters. My favourite being a sheet hung up that was printed with tiny businessmen’s bodies; the actors poked their heads over the top wearing top hats and fake noses.

This show isn’t on for long and the theatre is pretty small so if you want to see this play (and I strongly recommend that you do) I’d try and snap up a ticket quickly. I know that we went on opening night but literally every single seat was taken. When the lights went up we noticed that Deputy Labour Leader Tom Watson was actually standing up (right next to us), which gives you an indication of the play’s popularity and the types of people that are going to see it!

Previous: Captioning Awareness Week
Next: Encounter, Above the Stag – Review