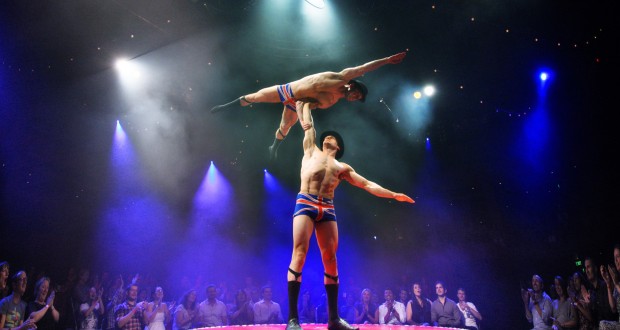 Cons: So much fun you might wish you had joined the circus as a teenager.
La Soirée, Southbank Center – Review

Pros: Exceptional performers, a fun and crazy atmosphere. Cons: So much fun you might wish you had joined the circus as a teenager. La Soirée is back in London for a sixth season, and their specially-erected Spigeltent provided the perfect atmosphere. The custom venue on the Southbank is large but welcoming, with a variety of street food vendors outside and two full-sized bars on the inside. The performance space is a large room with a tiny circular stage in the central pit. As I was directed to a seat in one of the concentric circles around the stage, I&hellip;

A varied and talented selection of performers will have you laughing, gasping, cheering and singing.

La Soirée is back in London for a sixth season, and their specially-erected Spigeltent provided the perfect atmosphere. The custom venue on the Southbank is large but welcoming, with a variety of street food vendors outside and two full-sized bars on the inside. The performance space is a large room with a tiny circular stage in the central pit. As I was directed to a seat in one of the concentric circles around the stage, I wondered what might be in store for me . . .

The format of La Soirée is just like any other Cabaret performance: a series of performers take turns in presenting short acts. The beauty of this format, of course, is that the audience can enjoy bite-size chunks of information, and do not need to keep their attention focused on any complicated plot lines or character arcs. Indeed, the audience are reminded at the start that getting up in the middle of the show to get more drinks from the bar is not only allowed, but advised.

However, even though you could technically get up and disappear for a few minutes to grab another pint, you would run the risk of missing the crazy and amazing acts. The cast of about ten performers are clearly all experts in their fields. I would not have wanted to miss a single minute of any of their routines. I laughed, I gasped, I winced and I gave more than one standing ovation. The skill of the performers is undeniable, and for many, the word ‘athlete’ might be better suited than ‘performer’.

One of my favourite routines was Captain Frodo, a mustachio’d Norwegian with the capacity to fit his entire body through a tennis racquet. He was totally in control of the audience with his buffoonish persona. Another crowd pleaser was the English Gentlemen duo, who performed a series of death-defying lifts and balancing, all while adjusting they waistcoats, and reading the Financial Times. Denis Lock’s soap-bubble-based artistry received no less than a standing ovation. You will probably be wondering how blowing a soap bubble can get you a standing ovation. It would be too long to explain, and would spoil the fun: your only option is to see it for yourself!

The word count prevents me from singing the praises of all the rest of the performers in detail. But I the least I can do is give them each a one-line summary. Mooky had the room in stitches as she tricked an audience member into singing her a love-song. Yammel Rodriguez had us staring in amazement as she swooped over us, while smoking a cigar. Asher Treleaven titilated the audience with his sexy Diabolo for ladies (and men), and with selected readings from an erotic novel. Bret Pfister delighted the audience with a jaw-dropping display suspended from a hoop. Melanie Chy made the most dramatic entrance of the night before her acrobatic routine. Frisky provided the perfect Cabaret experience with her soulful singing. And last, but by no means least, Mario Queen of the Circus had the audience at his fingertips as he crowd-surfed his way to glory.

All in all, La Soirée is an absurdly fun event, which will have you desperate for more. The acts are talented and varied, and there is certainly something for everyone. And with an ever-changing lineup, it is the kind of show you will want to see again and again. There is just the right level of smut, just the right level of amazement. The only downside that I can think of is that it all looks like so much fun that you might wish you had run away to join the circus back when you were a teenager.