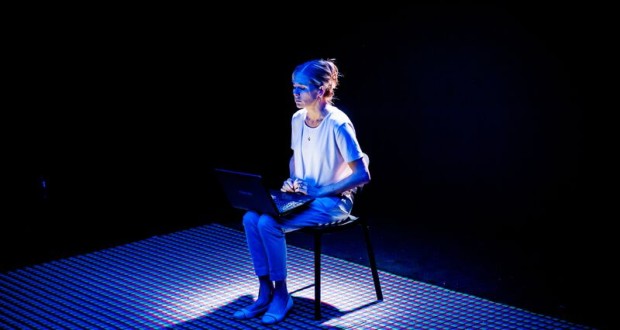 Pros: A brilliant feat of both acting and writing produces a story filled with intrigue and drama.

Pros: A brilliant feat of both acting and writing produces a story filled with intrigue and drama. Cons: Obscured visibility at times, but nothing to write home about. After a successful run at the Hampstead Theatre, James Fritz’ first full length play, Four Minutes Twelve Seconds has found a new home at the wonderful Trafalgar Studios. A venue that’s not quite a West End fanfare, but not really a fringe space either, the theatre seems to offer the best of both worlds, making it the perfect location for this compelling, thought-provoking production. Four Minutes and Twelve Seconds is the length&hellip;

A wonderfully polished piece that raises some uncomfortable issues concerning sex, class and gender in a digital age.

After a successful run at the Hampstead Theatre, James Fritz’ first full length play, Four Minutes Twelve Seconds has found a new home at the wonderful Trafalgar Studios. A venue that’s not quite a West End fanfare, but not really a fringe space either, the theatre seems to offer the best of both worlds, making it the perfect location for this compelling, thought-provoking production.

Four Minutes and Twelve Seconds is the length of the video that could haunt seventeen-year-old Jack forever. A sex tape of him and then girlfriend, Cara, finds its way onto the internet, prompting physical assault from Cara’s brother and a damaging accusation that could ruin Jack’s life – that the sex was forced. Who uploaded the film? Who is lying? While the views on the video climb to half a million in the first week, we are left watching the aftermath, as Jack’s parents try to get to the bottom of what is happening to their beloved boy. As Jack’s mum, Di, begins to question her son’s honesty, the story raises some interesting questions about loyalty – would you stick with your family, or would you do the right thing?

The script is minefield of moral ambiguity and faltering allegiances. Filled with a myriad of inspired ideas, it throws into question a number of issues like the power of the internet, and the prejudices that plague both class and sex. Had Jack’s character been present, the tale would not have been half as powerful, but we never meet him, nor do we see the video in question, leaving us to mull over every possible scenario in our own minds, using only the perceptions and judgements of the four characters. As we explore the many different scenarios, the story almost teeters over into the realm of the farfetched, but keeps us guessing right to the final scene.

Although a brilliant script, this performance owes its success in part to the faultless four-strong cast, who succeeded wholly in portraying the hopelessness of a painful situation. Kate Maravan portrayed the defensive mother in an impossible situation with zeal. Her relationship with placating and likeable husband, David, played by Jonathan McGuiness, showed the strain of the event through their bickering and butting heads, as well as adding some much needed humour to the drama. There was no weak link in this polished performance.

With such a strong story and talented performers, Janet Bird was right to keep the design to a minimum. With no props whatsoever, and a sparse set on a digitally appropriate pixellated stage, this simple, no-nonsense approach gives the content the opportunity to shine, to great effect. As well as this, Mark Howland’s lighting was spot on. Blackouts added tremendously to comic timing, and also to the build up of intrigue. Periods of time cut out had you wondering what had transpired, and left you to put the pieces together, doing wonders for the pace of the 90 minute piece. With the audience seated on three sides of the stage, the only issue was visibility, as the actors had their backs to certain sections of the audience a number of times, obscuring the stage. In such an intimate space, however, this is to be expected, and it didn’t detract terribly from the performance.

In an age where sex seems so casual, and information is shared so quickly, this tale raises some interesting and uncomfortable questions about gender, class and consent. One aspect that raises no questions at all, however, is the quality of the story. With this witty, gripping drama, which throws morals and relationships into turmoil, Fritz has certainly put himself on the map as a writer to watch.

Previous: The Session, Soho Theatre – Review
Next: Win Tickets to As You Like It at the National Theatre