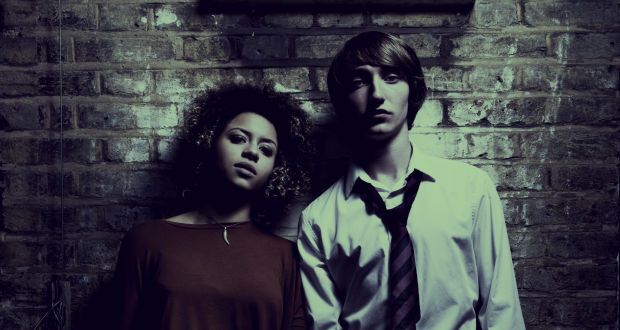 Pros: A lively and energetic play with enough laughs to keep it flowing from its frantic start to disturbing finish.

Pros: A lively and energetic play with enough laughs to keep it flowing from its frantic start to disturbing finish.  Cons: The family relationship of the male love interest felt very shoe-horned and under-developed, leaving the ending a little confusing. As a love story, First Love Is The Revolution has all the classic elements. The two lovers from differing backgrounds. Two families who feel their children shouldn't be together, both thinking the other is not worthy, and finally the tragedy as the relationship develops. It could almost be Shakespearian. Well, it would be all very standard if the families&hellip;

A fun 90 minute love story that flies by, with enough of a novel take on the boy meets girl concept to make it stand out.

As a love story, First Love Is The Revolution has all the classic elements. The two lovers from differing backgrounds. Two families who feel their children shouldn’t be together, both thinking the other is not worthy, and finally the tragedy as the relationship develops. It could almost be Shakespearian.

Well, it would be all very standard if the families were separated by something normal; maybe class, or some long-standing dispute. So what immediately grabs your attention is the realisation that one of the families just happens to be foxes. It’s certainly a very different take on the love story, but one that is played out so well in its innocence, and with so much good humour it’s almost perfectly normal. As normal as a love affair between boy and fox could ever be anyway.

From the opening scenes as the three fox cub siblings return home after a night out on the town, the pace is frantic. The drum and bass soundtrack fits perfectly with the hectic nature of the three as they laugh and jump around the stage reliving their excitement. The play quickly develops as Rdeca, a female fox cub, ventures out, meeting Basti, a weak and bullied boy. Their relationship moves from curiosity to teen love, and finally the expected showdown as the two families finally come face to face.

There is some beautiful staging: the high-banked rear of the stage is perfect for scuttling around as the boy and the fox chase and watch each other. The hole they enter the den through allows the play to move from outside to inside even without any change of set and to develop at its fast pace.

The performance has some excellent characterisation. For example, there are the almost show-stealing and joyous old hens that could have been taken from the minds of the Monty Python team themselves. It’s clear that much thought has gone into making the characters as animal-like as possible. It negates the need for any obvious clothing or make up: instead we watch foxes as normal teens, with their protective mother, all portrayed as human in their thoughts and needs, even as we easily see them as foxes.

However, there are some issues in the production. As the relationship develops, Rdeca seems to jump quickly from naive teen to worldly-wise all in one scene. It might have worked better had she not begun so innocent, but rather as a more experienced teen against the inexperience of her young boyfriend Batsi. It also felt that Batsi’s absent mother and the revelations were too forced, put in towards the end simply to give more meaning and to justify the final scenes. But given the play is just ninety minutes long, there clearly had to be some cuts along the way… just maybe one cut too many?

But minor issues aside, First Love Is The Revolution ninety minutes of pure fun and plenty of laughs. It has energy and humour, and the theme of teen’s first love with its brilliant use of music should appeal to a younger audience alongside those looking for a quirky take on the classic love story.