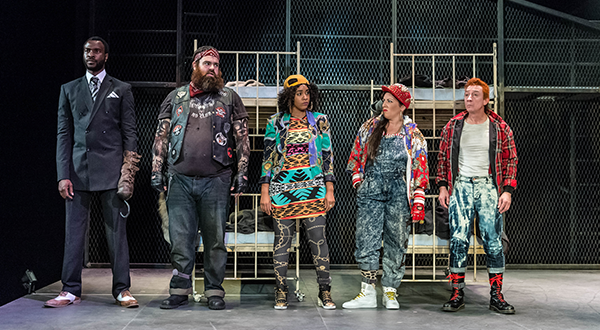 Pros: A fun musical romp which turns the usual certainties on their head. With an ambitious and stylish narrative, this show provides laughs for all the family.

Cons: Some pretty dry choreography and staging, along with concepts too intricate for the play to handle.
Baddies: The Musical, Unicorn Theatre – review

Pros: A fun musical romp which turns the usual certainties on their head. With an ambitious and stylish narrative, this show provides laughs for all the family. Cons: Some pretty dry choreography and staging, along with concepts too intricate for the play to handle. The Big Bad Wolf gets arrested while attempting to eat Little Red Riding Hood. Bewildered, he screams, ‘but I was just doing my job’. Thrown in prison with several other familiar faces, the Big Bad Wolf and his fellow baddies have to work out what exactly is going on. Let the conspiracy theories begin. Part&hellip;

A witty family show with a brilliant array of familiar characters as you have never seen them before. Hilarious and perplexing in turns.

The Big Bad Wolf gets arrested while attempting to eat Little Red Riding Hood. Bewildered, he screams, ‘but I was just doing my job’. Thrown in prison with several other familiar faces, the Big Bad Wolf and his fellow baddies have to work out what exactly is going on. Let the conspiracy theories begin.

Part pantomime, part prison drama, part mediation on the nature of good and evil, but still very much a musical. There is so much to like in this show – the characterisations are brilliant with interesting twists on the usual themes. We get ‘Wolfie’ going through an existential crisis due to his love for Cinderella, Captain Hook as a suave suited ex-lawyer, Rumpelstiltskin as a leery Scottish punk and the Ugly Sisters as two self-styled fashionistas.

Trapped in the prison cell they start to squabble and lament their situation and mercilessly bully poor Rumpelstiltskin. Then Cinderella turns up, followed shortly after by Peter Pan, to save the day and help ‘rebrand’ our baddies in accordance with instructions of the Council of Bed-Time Stories, because baddies are ‘so last season’ and no longer needed.

The Unicorn Theatre provides a great space, and is currently celebrating its tenth year of mixing the traditional with the modern, just like in Baddies: The Musical. The initial set makes great use of simple lighting and a raised plinth on the stage to provide a stylish, focused beginning. Then it opens up to a deep prison set that seems to reach into the bowels of the building. There are some great touches here, with the live band doubling up as the prison guards and occasionally wandering onto the set for an instrument solo or as a narrative device. Ultimately though, the set is rather confusing, moving from a slick opening to some very stilted choreography with a pair of metal bunkbeds that just seem to get in the way more than provide an interesting accompaniment to the action. The same is true in the second half, regarding the use of some orange plastic chairs.

Therein lies the problem with this production: it sometimes feels like two plays going on at once – and not in a good, Alan Ayckborn way. It seems stuck between wanting to tackle the complex, but interesting, concepts relating to consumer society and good and evil, and wanting to entertain the children with slapstick and fart jokes. This CAN work, like in The Lego Movie or WALL.E for instance, but the two approaches just don’t quite gel here. As a result, some of the story is quite convoluted and unclear. I also got the feeling that the children in the audience wanted to shout and interact more when they were encouraged to, but were too puzzled about whom to cheer for.

The acting and alacrity of the cast is what makes this show so good, Dean Nolan as the Big Bad Wolf is the star of the show, slipping between scary and neurotic seamlessly. Miles Yekinni also puts in a subtle but commanding performance as Captain Hook, and Kathy Rose O’Brien as Cinderella is a sight to behold as her goody-goody façade crumbles before your eyes.

By the closing song, when the energy is kicked into a higher gear, all is forgiven; this show is a riot, if slightly hindered by a script trying to do too much.

Previous: The Devil is an Ass, The Rose Playhouse – Review
Next: Flowering Cherry, Finborough Theatre – Review

Martin is an editor of books on psychoanalysis as well as a writer and poet. Theatre has always been ‘that thing that was always there that he is unable to avoid’ and so he loves it as he does any other member of his family. He has variously been described as ‘the man with all the t’s’, ‘the voice of the indifference’ and ‘Jesus’, but overall he is just some guy. He wakes up, does some stuff then returns to slumber, ad infinitum. A container of voices. He hates mushrooms.