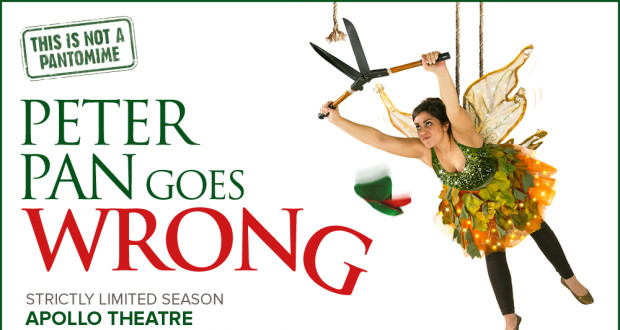 This is your chance to win a pair of tickets to Peter Pan Goes Wrong, at the Apollo Theatre
To enter, simply retweet the below by Friday 9th Oct at 5pm…

About Peter Pan Goes Wrong at the Apollo Theatre

The original cast of the West End’s hit comedy The Play That Goes Wrong return to the stage this Christmas in J.M. Barrie’s classic Peter Pan.
Once again the members of the Cornley Polytechnic Drama Society battle against technical hitches, flying mishaps and cast disputes.
Will they ever make it to Neverland?
For the slickest show in the West End this season, DON’T see Peter Pan Goes Wrong!

Terms and Conditions apply. Tickets are valid 15-17 December 2015 or the 12-14 of January 2016.
Subject to availability. Prize is as stated and cannot be transferred or exchanged. No cash alternative will be offered.