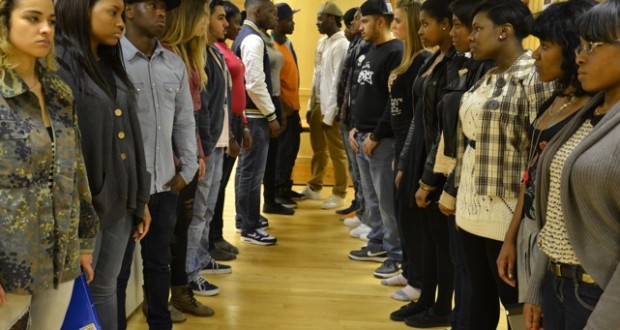 The rise and rise of Intermission Youth Theatre

Last year I was sent by Everything Theatre to review Taming Who, at a church in Chelsea. It all sounded dangerously amateur, but off I went, with my low expectations. I was rewarded with a fantastically clever adaptation of The Taming of the Shrew that made me laugh for 90 minutes and showcased some fresh, talented performers. Now, Intermission Youth Theatre are preparing to open Rise and Fall, their adaptation of Julius Caesar, and Everything Theatre was invited along to see them in rehearsal.

I found the company not in the theatre space, or the rehearsal room, but seated around trestle tables in the foyer, tucking into a hearty lunch. Since the company are all aged between 15 and 25, and full of energy, those jacket potatoes didn’t stand a chance. Intermission Youth Theatre (IYT) was founded in 2008, with a mission to support young people who lack opportunity or are at risk of offending. It has its home just behind Harrods, in St Saviour’s church, where the theatre itself is quirky, attractive and on the small side. But it was clear from my Saturday afternoon visit that the other spaces within the building are at least as important. Associate Director Cecilia Segar describes IYT as a second home for young people whose first home may be troubled or whose neighbourhood is full of traps for the unwary; to see the company members dozing on sofas, singing, goofing around together and wolfing carbs, its family ethos is unmistakeable. 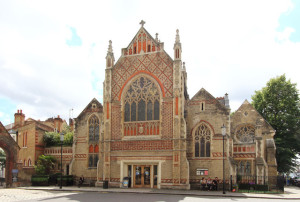 The company works with 25 young people each year. Some are returners, some are new recruits, selected through an interview process in January. Most are still in education or training, so they meet every Saturday and some week nights, to prepare for a production in the Autumn. Thus far, all their productions have been adaptations of Shakespeare, which meld the original text with a street version of modern English. Artistic Director Darren Raymond, whose own introduction to drama came through the London Shakespeare Workout, is passionate about the transformative power of the written word. He uses the plays to build confidence, raise aspirations and help his young actors reflect on contemporary situations and life choices.

Individually they are calm, reflective and articulate

That the process builds confidence is very clear when you talk to the actors themselves. En masse, they are a bunch of Tiggers; loud, boisterous and irreverent. But individually they are calm, reflective and articulate about the company, the production and their own aspirations. Kwame is a relative old-timer with the company, having appeared in four productions. He explains that they all have to audition for parts, but says “I’ve gained a lot more confidence, due to the roles that Darren’s given me…if he had the faith and confidence that I could have done that role, he must see something in me.” Ronke agrees, “One thing that I’ve definitely gained from Intermission is confidence. Confidence in my acting…and even confidence in myself.”

Most of the people I spoke to were hoping to work in the performing arts after leaving Intermission, and certainly this suggests a very healthy level of aspiration, given the competitive nature of the industry. I wonder if there is a risk in nurturing such lofty ambitions, but Cecilia assures me that most graduates do manage to secure professional representation, and that IYT’s mission also encompasses pastoral care and careers guidance. Intermission alumni are starting to pop up on stage, on TV and in short films; Tosin Cole, probably the best known of them, has appeared in EastEnders, Hollyoaks, and earlier this year at Trafalgar Studios. Given the close-knit community in which their acting careers have begun, it is only a matter of time before the original IYT members start giving a leg up to the newer graduates – perhaps they’ll surpass Eton as a breeding ground for acting talent!

So how do the actors feel about tackling Shakespeare? Predictably enough, most said that their only experience of Shakespeare was at school, and that they were initially nervous about the language barrier. Vanessa, who is new to IYT this year, explains that Darren starts the year’s workshops by bringing out different quotes and passages from the text, and challenging the actors to piece them together in a way that makes sense. “At first we were all wrong, but then we kept learning and practising, and we understood it.” Chioma, another newcomer, agrees that “Before I wasn’t too bothered about Shakespeare. I felt that the language wasn’t accessible – a bit too much brain-power basically, to understand what he was trying to say. But the ways Darren’s adapted it, it makes you see how…even though the words aren’t exactly the same way that we speak now, the themes are still the same.”

It comes to one scene, he gets stabbed up bad time.

Young actor Iain tells me, using industry jargon quite unselfconsciously, that as they work towards the production “different practitioners come in and they help us try to develop our characters.” (IYT probably has its pick of different practitioners, with Sylvia Sims as its ambassador and Mark Rylance as patron.) It is fascinating listening to Iain talk about Rise and Fall. When he explains the plot he’s full of intensity and passion, and could almost be describing a Scorcese film: “It comes to one scene, he gets stabbed up bad time. Man are poking him bad like. Stabbing him, stabbing him, until eventually, basically, he just gets killed off.” But when it comes to talking about the process he is polished and professional: “as you know, we open next week, so we’re just going through the last little bits, trying to perfect everything, and I just can’t wait for it to open.”

It’s brought out the creativity in me.

More than anything else in my visit, I was struck by that contrast between the manic exuberance of the performers at rest, and their calm focus once the rehearsal started. Post-Kids Company it seems foolish to lionise individuals and social enterprises, but it was very evident to me that Intermission is channelling the energy and imagination of these young people in a way that is constructive and fulfilling. Whether or not they end up making a career in theatre, they all gain by their time with Intermission. As Kwame says, “I’ve become twice as much of a creative person than I was…since I’ve come here I’ve taken up poetry, I’ve started making music. It’s brought out the creativity in me.” That will take them far in any walk of life. 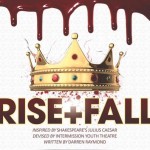 Rise and Fall opens on 28th October 2015, with performances every Wednesday to Saturday until 21st November. The performance on 4th November will be in aid of Refugee Action.