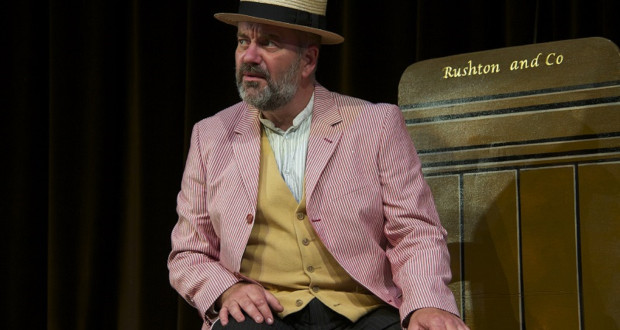 Pros: Both entertaining and thought provoking, with just the right amount of audience participation.

Pros: Both entertaining and thought provoking, with just the right amount of audience participation. Cons: Lacked clarity at times. Due to my deep-seated issues with the London Overground, I arrived at the theatre at 7:32 PM in a panic. Thankfully, a kind staff member (I didn't catch your name, but if you're reading this, thanks again!) assured me that all was well and personally led me into the theatre -- an intimate black box space. Despite my lateness, I managed to snag a seat that was dead-centre, which thankfully meant that I was spared from leaning around pillars or watching&hellip;

An innovative and theatrical presentation of a classic working-class tale that, while occasionally difficult to follow, was fun and engaging overall.

Due to my deep-seated issues with the London Overground, I arrived at the theatre at 7:32 PM in a panic. Thankfully, a kind staff member (I didn’t catch your name, but if you’re reading this, thanks again!) assured me that all was well and personally led me into the theatre — an intimate black box space. Despite my lateness, I managed to snag a seat that was dead-centre, which thankfully meant that I was spared from leaning around pillars or watching the actors in profile.

Touted as “a socialist classic”, The Ragged Trousered Philanthropists tells the story of a group of painters and decorators in early 20th century England on the brink of a socio-political revolution. This particular production, I discovered, is an adaptation of an adaptation: Originally based on the novel by Robert Tressell, Stephen Lowe’s play has been modified for only two actors (Neil Gore and Jonathan Markwood). The performers were more than up to the challenge, switching rapidly and seamlessly between 6-7 characters each, while also demonstrating their considerable skills in singing, musicianship (four instruments!) and even puppetry. Both Gore and Markwood established an effortless rapport with the audience, and some of their characters were so clearly defined that I forgot they were played by the same person.

That being said, it took me about fifteen minutes to settle in to this style and understand what was going on. And once I had grasped who the major characters were, there were still moments when I lost the flow of the story. I also found that as an American, some of the references were lost on me; there were moments when everyone burst out laughing and I felt I had missed something. However, the overall themes were universal, and I found myself relating Philanthropists to stories from classic American literature.

According to playwright Stephen Lowe, the director of the original production rejected the script at first because it was “silly.” For me, this was the play’s selling point: The varying levels of silliness throughout meant that the serious moments were much starker, almost shocking in comparison. The tone in the lighter moments was like two children playing pretend, and the actors’ playfulness was infectious — the whole audience (myself included) was hooting with laughter, singing along, and even swaying to the music.

This tone was established from the very beginning, with actor Neil Gore reacting to a mobile phone in the audience with a wry, “Good timing!” This breaking of the “fourth wall” was continued throughout the performance, including a rather extended scene of audience participation at the end of the first act — one of the high points of the show for me. (Tip: If the thought of being pulled into the show horrifies you, consider avoiding the front row.)

The technical elements were subtle but very effective. Designer Fine Time Fontayne’s set, built from paint-stained planks and scraps of fabric, appeared thrown together, but was actually very complex and detailed. The music (directed beautifully by John Kirkpatrick) and scene changes were provided by the actors, sometimes at the same time, as in a great moment when Neil Gore hilariously changed a backdrop while playing the harmonica.

The Ragged Trousered Philanthropists is the first of two plays to be presented by Townsend Productions during their residency at the Bussey Building by (followed by United We Stand, about the Shrewsbury 24). In addition to the performances, there are informational lobby displays and a series of guest speakers, making it well worth a trip to Peckham for anyone with an interest in English history and politics.