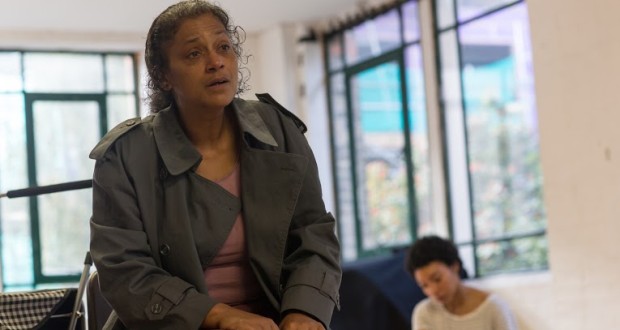 Pros: Phenomenal acting talent.  Cons: Uncomfortable seating makes for a very long performance. Following the resounding success of their first mid-scale tour of Macbeth, Tara Arts and Black Theatre Live are back with Pitch Lake Productions’ impressive new play, She Called Me Mother. Beginning their UK journey at Stratford Circus Arts Centre, the performance explores the subject of homelessness in an emotional and inspiring way. For a topic so despairing, this play is well and truly moving, and not at all what I was expecting. Inspired by author, Michelle Inniss’ encounters with a homeless woman in London Bridge Station,&hellip;

A moving tale about life as a homeless woman, this poignant production will certainly speak to your humanity.

Following the resounding success of their first mid-scale tour of Macbeth, Tara Arts and Black Theatre Live are back with Pitch Lake Productions’ impressive new play, She Called Me Mother. Beginning their UK journey at Stratford Circus Arts Centre, the performance explores the subject of homelessness in an emotional and inspiring way. For a topic so despairing, this play is well and truly moving, and not at all what I was expecting.

Inspired by author, Michelle Inniss’ encounters with a homeless woman in London Bridge Station, She Called Me Mother introduces us to the story of Evangeline Gardner. As the play opens, she sits on her borrowed chair, selling copies of a homeless magazine, waiting impatiently for her ‘Black Swan’ to visit, who reminds her so much of her daughter. 70 years old, and so far from her childhood home in Trinidad, she tells of her life: of her estranged daughter, Shirley, and her fraught relationship with her husband, and of all the events that have led her to where she is now.

First and foremost, this is a play that really speaks to my humanity. We can all sympathise, but it feels as though homelessness has become just another part of life, and we’re often guilty of hurrying past those sitting on the street without a second glance. She Called Me Mother does an incredible job of humanising the issue, reminding the audience that everyone has a story and everybody comes from somewhere; no one starts out homeless.

Considering the less-than-cheery content, I was wary that the play might come across as preachy and a little morose. Perhaps it would have done had it not been for the incredible two woman cast. BAFTA-nominated Cathy Tyson commands the audience’s attention as Evangeline. Her warmth and ease on stage makes it impossible not to feel for her. Her hope of one day seeing her daughter again, combined with her matter-of-fact view on the lows in life are incredibly moving. Perhaps a little less lively, but equally poignant, Chereen Buckley has the audience hanging on her every word as she recounts Shirley’s upsetting childhood stories. The script and story are impressive, but a lesser cast would not have done it justice.

Juxtaposing the warmth of Evangeline and her Trinidadian dialect, which has such a comfort about it, the staging of the cold, built-up station was very well thought-out. Intermittent train announcements worked well to break up what could have been quite a monotonous piece. The fluorescent strip lights that occasionally illuminate the stage do a particularly good job of altering the mood, making you realise that some things have to be viewed in a harsh light, even though you may not like it.

The performance itself was brilliant, but unfortunately the sold-out performance meant that the audience was really crammed in. Despite being one of the first to arrive, I ended up with only half a seat, mercifully on the end of the row. Nevertheless, it was rather difficult to concentrate towards the end. As this is a touring play, this won’t be an issue for every performance, but sadly for this space, 90 minutes with no interval is a little too much for my aching back to bear.

Playing at Stratford Circus until 11th October, this is one to catch on tour if you can. The phenomenal acting talent of this remarkable duo is inspiring. Michelle Inniss’ ability to tell such a moving story as this is particularly impressive. This is Pitch Lake Productions’ first small scale tour, and if it’s anything to go by, this company is definitely one to watch.