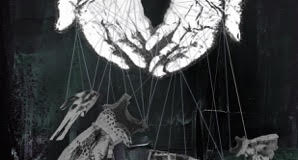 The Adding, The Cockpit – Review

Cons: The last section felt a little too drawn-out.
The Adding, The Cockpit – Review

Pros: Very creative, well executed and atmospheric. Cons: The last section felt a little too drawn-out. The Adding begins with a post-coital conversation between ‘Him’ (David Maine) and ‘Her’ (Kate Handford). As the play progresses, we watch their relationship sea-saw through work, sex, homelessness, pregnancy, crime and death. The two main ‘human’ characters feel very three-dimensional, thanks to strong, emotive performances from Maine and Handford. Much of their dialogue is argumentative and I found myself switching allegiances between the two characters, throughout the course of the play. I thought this was an interesting approach as the depth of characterisation meant&hellip;

An interesting play with a strong cast, great puppetry and thought-provoking themes.

The Adding begins with a post-coital conversation between ‘Him’ (David Maine) and ‘Her’ (Kate Handford). As the play progresses, we watch their relationship sea-saw through work, sex, homelessness, pregnancy, crime and death.

The two main ‘human’ characters feel very three-dimensional, thanks to strong, emotive performances from Maine and Handford. Much of their dialogue is argumentative and I found myself switching allegiances between the two characters, throughout the course of the play. I thought this was an interesting approach as the depth of characterisation meant there was no real ‘good’ or ‘bad guy’ to side with. Jessica Dives and Ciarán Myers are equally strong in the roles of a brothel madam and a café manager. Crucially, these characters are played with an appropriate sense of scale. They support the story, whilst allowing Him and Her to remain in focus. There is an important fifth character but we’ll come to her later…

One of the most visually interesting aspects of this play is the set. The open space is filled from the start with wooden boxes, two office chairs, two doors and an array of props and paraphernalia. These items are then rearranged and manipulated to create a new set for each scene. This whole operation is executed seamlessly as the cast and crew create bedrooms, offices, a street and more, from the same set pieces. What really impressed me though, was Director Catherine Fowles’ decision to change the physical perspective of the audience throughout the play. By altering the angle of a desk and the position of the actors, we see the same office as if from different sides of the room. This was not only a clever visual effect; it also gave depth to the idea of viewing different sides of the characters’ conflict.

Lighting is used well within the piece, creating distinction between the different scenes and helping to enhance the various emotions of the characters. The musical score is also impressive, particularly for its diversity. Some sound compositions create a ‘dark’ atmosphere around the drama, whilst others have a more friendly, childlike feel.

The fifth character in the play is ‘Marie’. Marie is a life-size puppet, which is why I refer to her in the context of the play’s production values. However in truth, she is very much a character in her own right. Brought to life by Myers and Clotilde de Verteuil, Marie is beautifully constructed and moves with a graceful ease. Although she spends a lot of time sitting at the edge of the stage, she is constantly animated, maintaining her sense of personality, without distracting from the action. Interestingly, the puppet has quite an eerie appearance but very quickly takes on a non-threatening, warm personality. This is due in part to the skill of her puppeteers but also to the voice acting from Dives. Hearing Dives’ voice via a set of speakers gave Marie’s words an ‘otherworldly’ quality, which was well suited to the character.

The dramatic nature of the narrative and the heightened emotions of Him and Her, make this quite an intense play to watch. With the exception of a few moments of humour, there isn’t a lot of respite from their various anxieties. For this reason, I felt that the latter part of the play could have been condensed for greater impact. At one point, the emotion builds to a dramatic crescendo, only to pause briefly and then continue at a similar pace. There is a lot of deliberate repetition of lines and some scenes are even replayed a second time. Whilst this did create a sense of poignancy, I felt that the same effect could have been achieved with a more concise sequence.

The Adding deals with ideas of right and wrong, sin and redemption and ultimately forgiveness. It’s a very interesting piece, with strong characterisation and a lot of atmosphere. The production values are high and every physical element is used with great creativity.