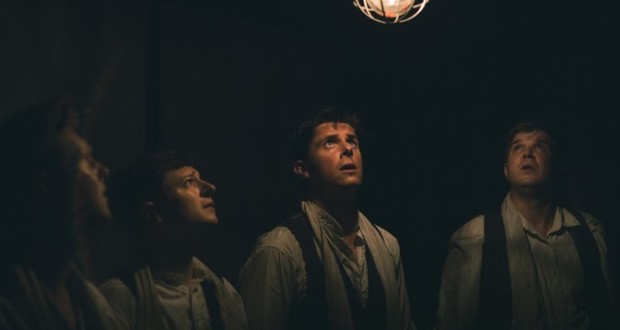 Pros: A dynamic telling of a story rarely told.

Pros: A dynamic telling of a story rarely told. Cons: A bit long, and some experiments in storytelling didn’t really work. I always love a trip to the Finborough. The theatre has been one of my fringe favourites since I moved to London four years ago, and I’m always excited to see how the venue continues to transform its space: because it does, incredibly, completely reinvent its intimate blackbox with every new production. The downstairs bar provides the perfect place to grab a pre-show drink. For a really stellar evening I suggest spending the afternoon in Hyde Park and moseying towards&hellip;

A solid and interesting production from a new writer, but not the Finborough’s most outstanding work.

I always love a trip to the Finborough. The theatre has been one of my fringe favourites since I moved to London four years ago, and I’m always excited to see how the venue continues to transform its space: because it does, incredibly, completely reinvent its intimate blackbox with every new production.

The downstairs bar provides the perfect place to grab a pre-show drink. For a really stellar evening I suggest spending the afternoon in Hyde Park and moseying towards the theatre on foot through the park and Kensington – it’s a charming area of London.

Currently running at the Finborough is the world premiere production of Operation Crucible, the debut from new writer Kieran Knowles. The play is a minimalist imagining of the experience of four steel mill workers during the Blitz attack that destroyed Sheffield in December 1940. It’s a creative and intimate story, weaving the past, present and future of the men together as the tragedy unfolds amidst the rubble of the Fitzalan Hotel, and survival instincts kick in.

The cast of four features playwright Knowles himself alongside Paul Tinto, James Wallwork, and Salvatore D’Aquilla. The performances from each are strong, with D’Aquilla making a notable impact as the oddball of the group, and Tinto tugging heartstrings as a romantic family man.

Knowles’ poetic and rhythmic script coupled with the direction of Bryony Shanahan leads to some interesting, but occasionally ill-informed choices in production. The set is bare: a wire lamp hangs over an empty floor, illuminating a backdrop that looks rusty but plain (Operation Crucible seems to be running in rep with We Know Where You Live, also using the same backdrop). The use of lighting to create a closed off factory one minute and a dark and claustrophobic hiding place the next is effective enough. Movement plays a large role, and is one of the play’s major strengths: the actors are able to recreate the steel mill using their bodies and sounds in a unique and convincing way.

I started to get lost in the stylistic choices about halfway through, once the actors had revealed their personal backgrounds (much of the play is directly addressed to the audience, and character interactions are used sparingly but effectively). Once the attack begins outside sound effects dampen the vibe of the actor’s organic tools – it’s harder to make a convincing explosion sound with your mouth than it is to recreate the whirring and clicking of a machine, admittedly ­– and then the lights go out.

I’ve never sat in a completely dark theatre so long in my life. It couldn’t have actually lasted more than ten minutes, but that’s a long time to sit and listen to rustles and hisses when you’ve taken a ticket to see something. The decision to throw us into the oblivion of darkness alongside the characters was purposeful but not particularly practical. It might have been different and more engaging had the green glow of the Exit sign not so decisively broken the illusion, but I think I would have preferred even a small bit of backlighting to keep me focused on the action regardless.

We endure the struggle of the men as they wait it out, fearing death for themselves and their loved ones. Once they’re freed we get a short epilogue and the play ends where it starts, with James Wallwork bookending the piece with the same haunting monologue about following the smoke home to a destroyed Sheffield.

In all it’s a solid production, but I’ve been spoiled by the Finborough for long enough that I wasn’t particularly impressed. I’ve grown accustomed to incredible attention to detail and creative use of the venue. Knowles’ script was beautifully written, but certainly could have been more intense, more engaging – I’d have loved for the fourth wall to have remained a bit more in tact and seen more going on between the men. The performances were certainly good, and the men carried the show well. Knowles’ dedication to his own words and story shone brightly in his performance in particular, and it’s not bad at all for a world debut at one of London’s most renowned new writing theatres.