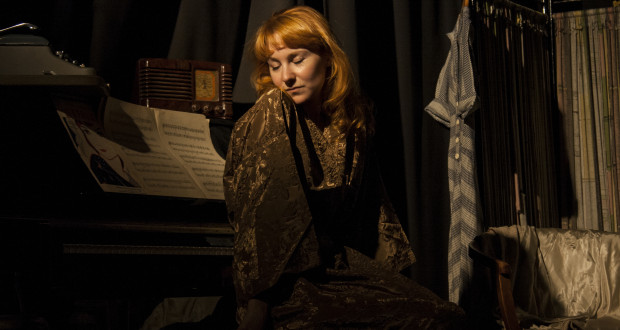 Cons:  Not all of the time periods are handled with the same consideration and as a result some come across better than others.
Not Now, But Now, Canal Café Theatre – Review

Pros: A charming tale full of strong acting, time-travel and love. Cons:  Not all of the time periods are handled with the same consideration and as a result some come across better than others. The venue is one of the most charming I've been to in London; a quaint canal side pub with genuinely good food. The layout of the theatre, however, does leave something to be desired. Instead of rows, the audience are seated at tables, which has the unfortunate effect of patrons not sitting front-on to the stage. I saw two shows in one night at this&hellip;

A really interesting and sweet story of a woman travelling through time, breaking hearts and taking names that will have you rooting for her to come out on top.

The venue is one of the most charming I’ve been to in London; a quaint canal side pub with genuinely good food. The layout of the theatre, however, does leave something to be desired. Instead of rows, the audience are seated at tables, which has the unfortunate effect of patrons not sitting front-on to the stage. I saw two shows in one night at this venue, and in the first show ended up with a poor seat at my table with my back nearly to the action and I’m sad to say my neck wasn’t feeling great by the finish. (The seat for the second show, in a front facing seat, was drastically better.)

Seating aside, the rest of the evening was really enjoyable. Not Now, But Now tells the story of Cora, a woman who oozes sexuality and is apt at making men fall for her. She is also somewhat of a time-traveller. Throughout the evening she visits three different time periods where we see her seduce (and potentially be seduced by) various lovers. All the while she maintains a certain amount of detached defence that comes with the ability to make people fall in love with you knowing that you can move on easily and not get too attached.

We open with Cora in a tumultuous relationship with a distinctly unlovable and narcissistic pop star in the late 1960s or early 1970s. The costuming is charming, but Cora doesn’t sit quite right in this era. Her voice, a husky, smoky, enchanting voice feels out of sync with this period – and I spent the first portion wishing I could see her in the 1940s instead. Come Cora’s next incarnation, I was not disappointed.

Cora returns in 1940s War Time London and Katherine Rodden is just perfect in this role. Absolutely perfect. Her voice, her behaviour – all bring to life a strong and enchanting version of Cora. Daniel Collard, who plays the male leads in Cora’s life, comes to life in this portion too—although in fairness to the actor, he grows in strength throughout the production.

The third existence of Cora is perhaps the most interesting in terms of her development, but it’s also the most testing in terms of clarity of the time period. Cora appears to have landed in an Eastern European research and testing facility. While the clothes feel very Mork and Mindy, there are no pieces of furniture or stage décor which provide clues to the time period – and this is very different to the previous two experiences. The stage is peppered throughout the three storylines with pieces and objects which clearly identify with the 60s and 40s, but nothing ties this period to an actual time period that we’ve experienced.

We see a different Cora here too, less careless and far more vulnerable. Rodden is a force to behold when Cora gets angry and Collard is in full strength in this role as his character retains more control over the situation. Rodden and Collard are well matched in all scenarios and I was impressed by their versatility, particularly that of Collard – although it took a while for me to become aware that he was playing three different men and not one man who travelled alongside Cora.

It’s interesting subject matter, and it’s brought to life well. The first portion isn’t the strongest, but the performance grows and builds – and what feels rather trivial and trite initially becomes a rather interesting study of a time traveling lover trapped by her circumstances.

Previous: Three Days in the Country, National Theatre – Review
Next: Win Tickets to Hamlet is Dead. No Gravity at Volta Festival!