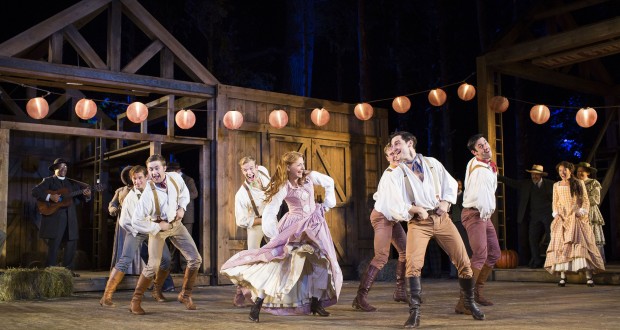 Cons: The gender politics are about as contemporary as the pyramids and the plot is rather thin.
Seven Brides for Seven Brothers, Regent’s Park Open Air Theatre – Review

Pros: There’s much to love about this production; the music, the dancing, the singing, the dancing, the acting and, oh, did I mention the dancing? Cons: The gender politics are about as contemporary as the pyramids and the plot is rather thin. London boasts some very fine theatres, but it’s difficult to think of one more perfect to spend a beautiful summer’s evening at than Regent’s Park Open Air Theatre. Equipped with a large bar, a barbecue and a liberal sprinkling of fairy lights, it’s a wonderfully secluded spot right in central London. Currently it’s home to Seven Brides&hellip;

A funny if rather ridiculous show that’ll have you signing up for line dance classes as soon as you get home.

London boasts some very fine theatres, but it’s difficult to think of one more perfect to spend a beautiful summer’s evening at than Regent’s Park Open Air Theatre. Equipped with a large bar, a barbecue and a liberal sprinkling of fairy lights, it’s a wonderfully secluded spot right in central London. Currently it’s home to Seven Brides for Seven Brothers. For those of you unfamiliar with this cowboy classic, the story centres on Oregon mountain man Adam Pontipee, who comes riding into town looking for a wife to clothe and feed him and his six younger brothers. When he meets waitress Milly the deal is quickly sealed, but events take an unexpected turn when Milly finds out about her new brothers-in-law, and decides to introduce them to women and civilisation.

It shouldn’t come as a surprise that the show, originally conceived as a fifties movie musical, is burdened with some, ahem, unfortunate gender politics. At about two minutes in Adam promises to pay his still unknown lady love’s way through cooking school, and it doesn’t get any more progressive from there on. Welcome to the mid-19th century Wild West, where the men are uncivilised boors who refuse to wash their pyjamas. The women of course want nothing more than to marry those men and tame them with flapjacks. The other issue with the plot is that it doesn’t hold up under close scrutiny. Its problems are many and glaringly obvious, like the complete lack of explanation of why Milly decides to up sticks and marry Adam within, literally, five minutes of meeting him.

That being said, I understand the attraction. The music is fantastic and some of the songs are very catchy; don’t be surprised if you find yourself humming Bless Your Beautiful Hide all the way home. The real brilliance of the show lies in the dancing, however. The story calls for some big dance numbers, and choreographer Alistair David doesn’t disappoint. From the brothers finding their ballet-feet in Goin’ Courting to the country dance battle in which the Pontipees and the town boys try to win over the girls, it’s one spectacular display after the other. The acting and singing are spot on as well. Laura Pitt-Pulford is a doggedly determined and likeable Milly, whilst Sam O’Rourke’s Gideon impresses most.

The set is a straightforward affair consisting mostly of wooden frames, embellished with some hanging laundry or bales of hay. And there really isn’t the need for anything more elaborate, since the surroundings of Regent’s Park already offer as beautiful and appropriate a background as you could possibly want. The staging is very effective too, with the actors shaking things up by making their way through the audience on several occasions, and delightfully, thanks to designer Peter McKintosh, some of the spectators even being covered by an ‘avalanche’.

In terms of the quality of this production, I can’t fault a thing. And should this team put their considerable talents into a show that has a bit more contemporary relevance, I’m sure it’ll be an exceptional treat. As it is, Seven Brides for Seven Brothers is a bit like Cats; an evening of nonsensical fun from a show that seems to exist in its own little universe. I had a very enjoyable evening, but now, as far as I’m concerned, this play can retire back to its shelf for the foreseeable future.