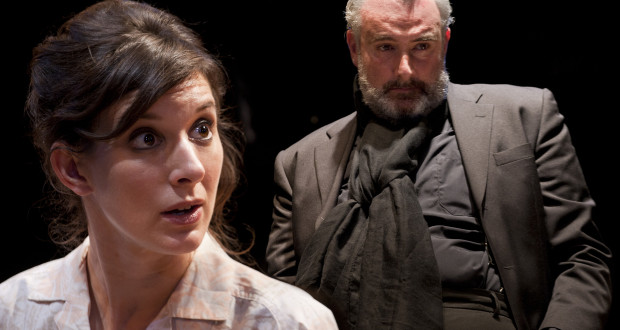 Cons: A bit too oh-so-clever with its unending references to life on a stage.
Orson’s Shadow, Southwark Playhouse – Review

Pros: Terrific performances exposing the scathing wit and towering egos of four great theatre personalities.  Cons: A bit too oh-so-clever with its unending references to life on a stage. What happens when you put an ageing film bigwig, a conceited love-of-the-nation actor, and two starry actresses together in a room with a celebrated theatre critic, mix it up with a sprinkle of passion and a whole lot of resentment and jealousy? This is what Austin Pendleton’s Orson’s Shadow attempts to answer, in a performance about the creation of Ionesco’s Rhinoceros in the 1960s, directed by Orson Welles and featuring&hellip;

The UK premiere of Orson’s Shadow about the clash of stage and screen titans Olivier and Welles will appeal to drama geeks and engage the rest of us.

What happens when you put an ageing film bigwig, a conceited love-of-the-nation actor, and two starry actresses together in a room with a celebrated theatre critic, mix it up with a sprinkle of passion and a whole lot of resentment and jealousy? This is what Austin Pendleton’s Orson’s Shadow attempts to answer, in a performance about the creation of Ionesco’s Rhinoceros in the 1960s, directed by Orson Welles and featuring the future husband-and-wife team, Laurence Olivier and Joan Plowright.

Gossip and conjecture about this troubled performance and the relationship between Welles and Olivier abound. If you’re looking for authenticity, you may well be disappointed – Joan Plowright herself has dismissed the play as largely fiction. That said, it makes for a good story. Theatre critic Kenneth Tynan (Edward Bennett) approaches his two great heroes to work together, and both of them reluctantly agree. It is an ill-fated partnership. Welles (John Hodgkinson) is haunted by his success with Citizen Kane, and Olivier (Adrian Lukis) is troubled by recent changes in the theatre landscape and his role within it. Both possess giant egos, and harbour deep resentments and a secret admiration for each other – a lethal combination that leads to verbal duels of scathing wit and sharp brilliance and amusing rehearsal room scenes. Alongside of all this, Olivier is having an affair with Joan Plowright (Louise Ford) while trying to disentangle himself from his spirited first wife, Vivien Leigh (Gina Bellman).

Alice Hamilton’s in-the-round play is engaging and comic, carried off well by some great performances. John Hodgkinson is a delight to watch as the stout and quietly bitter Welles, who revels in small personal and professional triumphs but more often cringes in Olivier’s presence. Adrian Lukis obviously enjoys his role as the passionate if overbearing Olivier and brings boyish charm to the character, and Louise Ford makes the most of her rather flat and overly subdued Plowright. Max Dorey’s set is beautifully detailed, from the props-table at the entrance (the first scene takes place on the lonely stage of the Royal Court Theatre) to stage ropes dangling from the ceiling.

The play did meander a bit, and certain scenes got a little weary as the script insisted on including as much theatre lore as possible – fun for a while, but pretentious and affected in the long run. The many references to the characters’ past work and lives seemed desperately trying to lend some authenticity to the script, but were really rather unnecessary and confusing to someone who does not know the characters’ biographies in detail – which is probably most of us. That said, it’s an engaging play, and elicited lots of laughs from the audience on first night. If you’d like to top up on your knowledge of great drama personalities (keeping an open mind in the light of Plowright’s dismissal), Orson’s Shadow is one for you.

Previous: Win Tickets to Three Writers Walk Into A Forest
Next: Bitesize Chekhov, The Courtyard – Review