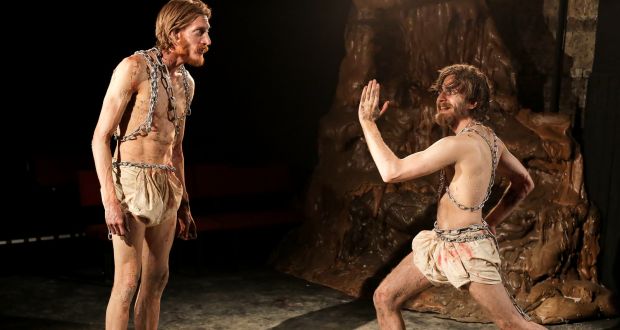 Pros: Thoughtful and funny play in cosy surroundings.   Cons: Humour sometimes deflated by repetition.  There is probably no better place to ponder one’s existence than in a pub. So this revival of Peter Barnes’ scorching religious satire Noonday Demons is already ahead of the pack. The cosy, yet professional, Kings Head Theatre - which purports to be the world’s oldest pub theatre - is an ideal spot for what at first seems at first to be a single-hander, which then mutates into a two-hander before descending into meta-weirdness. Noonday Demons is the story of monk and desert hermit&hellip;

Quality production of an interesting play that could hold its head up in a bigger venue. Excellent performances make it well-worth your time.

There is probably no better place to ponder one’s existence than in a pub. So this revival of Peter Barnes’ scorching religious satire Noonday Demons is already ahead of the pack. The cosy, yet professional, Kings Head Theatre – which purports to be the world’s oldest pub theatre – is an ideal spot for what at first seems at first to be a single-hander, which then mutates into a two-hander before descending into meta-weirdness.

Noonday Demons is the story of monk and desert hermit St Eusebius, who has thrown off all worldly things in pursuit of oneness with God. Yet, each day at noon, he is visited and physically taken over by a demon – a cheeky chappie with more than a hint of a 70s game show host – determined to tempt him back to worldly ways with offers of money, women and power. St Eusebius resists temptation until his true nemesis arrives – fellow hermit monk St Pior. The pair fight it out physically and intellectually, both determined to be the most devoted monk on the block and occupier of the dung-filled cave.

At the centre of the play is wonderfully comic and physical performance by Jordan Mallory-Skinner as St Eusebius. He grapples hilariously with himself, snapping between well-spoken, haughty monk and the anarchic, world-loving spirit. Both Mallory-Skinner and Jake Curran as St Prior brilliantly exploit the opportunities for physical comedy, producing some great slapstick moments to highlight the characters’ intellectual absurdity. St Eusebius, in particular, justifies the most godless acts in the name of his faith or, really, himself.

The audience is left in little doubt about the characters’ ultimate failings during these physical escapades. Noonday Demons is a powerful satire on the egoism of religiosity. Its themes are timely and frame current political arguments. However, the play reaches it thematic crescendo a little too soon, leaving no space to move the action forward. Yet while the plot stalls, it does so in an amusing fashion with water fights, levitation and mental transformation. But a few judicious cuts would have been welcome in what was a very hot, packed room.

Christopher Hone’s dung heap design sets the right barren tone and keeps the focus on the absurdity of metaphysical drama while providing a witty representation of the play’s ambivalent attitude towards religion. This is backed up lighting and music design that outshine their modest surroundings, creating some stunning effects.

The work of somewhat neglected Peter Barnes is enjoying something of a revival at the moment. His class satire The Ruling Classes stormed critical and public opinion at Trafalgar Studios with James McAvoy in the lead for much the same reason that Noonday Demons hits its high notes. The play is a witty, ambivalent look at the hypocrisy of man and its ultimate suspicion about those who seek to be superior is hugely appealing. Noonday Demons is a solidly built play on fascinating themes which more than justifies a night at the pub (theatre).

Previous: Little Malcolm and his Struggle Against the Eunuchs
Next: Three Writers Walk Into a Forest, Theatre 503 – Review