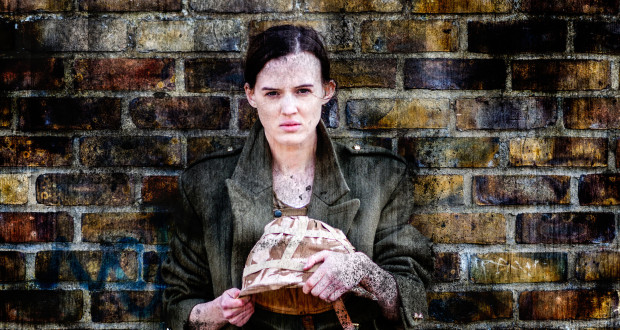 Cons: Difficult to do justice to such a big play in a small space and with a relatively small cast.
King Henry V, Union Theatre – Review

Pros: Talented actresses take on Shakespeare’s big characters.   Cons: Difficult to do justice to such a big play in a small space and with a relatively small cast.    The setting for Lazarus Theatre’s production of Henry V at the Union Theatre is spare and elegant. A slim table runs down the middle of the thrust stage, holding candles, a jug, ewer, bible and a delicate crown – if Kelly Hoppen did altars, they’d probably look like this. The all-female cast are waiting in the wings, just in sight, and as the play begins all proceed onto the stage,&hellip;

An uncompromising interpretation of Henry V. Well performed, but a little dry.

The setting for Lazarus Theatre’s production of Henry V at the Union Theatre is spare and elegant. A slim table runs down the middle of the thrust stage, holding candles, a jug, ewer, bible and a delicate crown – if Kelly Hoppen did altars, they’d probably look like this.

The all-female cast are waiting in the wings, just in sight, and as the play begins all proceed onto the stage, chanting Te Deum. It is not immediately obvious which actress is Henry, because all ten women are dressed in identical navy boiler suits, which bring to mind Rosie the Riveter from the WWII campaign poster. This costuming concept does have some merits; it sends a strong message that these are grafters ready, like Rosie, to roll up their sleeves and get the job done, and it reinforces the idea that this is a band of brothers with Henry their leader, but a soldier just the same. On the downside, the uniform costumes are deeply unhelpful to an audience trying to work out who’s who onstage.

The stripped back approach applies as much to the text as to the set and costumes. Ricky Dukes has cut large parts of the play, leaving only the English preparation for war and the English experience of battle. The French envoy remains – played for some reason in a clown mask – but the French camp and Katherine have been edited out, as have most of the comic interludes. This is a very single-minded approach, which eliminates anything that’s not directly concerned with the justification for war and the quality of Henry’s leadership. Whilst I wasn’t sorry, on a hot July night, to find that the play was on the shorter side, it did nevertheless feel rather reductive. The battle is fought and won so briskly, and we get such little insight into the French psyche, that it really does require great piecing out with our thoughts to imagine the scale and achievement of the victory. It also becomes rather dry and static; the same actors are on stage throughout, with few exits or entrances to maintain interest. Countering this, RJ Seeley’s excellent Fluellen provides welcome comic relief and a significant change of tone.

Colette O’Rourke might not have the physique of a warrior king, but she gives us a very credible Henry with a Mancunian accent and a pent-up energy. This is a young, street smart and intuitive king. Kerry Willison-Parry’s Archbishop of Canterbury is a warm and wise character who urges war in the firm but comforting manner of a school nurse. I don’t say this as a bad thing; one of the virtues of gender-reversed casting is that it sheds a different light on the text, and this underlined, for me, the reassurance that Henry must take from being urged to war not just by his nobles but also by the clergy. The all-female cast is no impediment at all to telling the story as the actors inhabit the characters convincingly, and one quickly ceases to think about the contradiction. However, removing all female characters and all male actors makes the piece less interesting and entertaining than it should be.

The Union Theatre is a very challenging space for a production of Henry V. It is difficult to conjure up either the rooms of state or the open fields of France in a space that is small and dark. But with plenty of dry ice and abrupt lighting changes the production is atmospheric and does evoke the chaos of war, even if it’s more trench warfare than cavalry charges. There are good performances throughout, and the actors interpret the verse with skill, though the costuming and editing make it hard to distinguish between the more minor characters. Strangely enough, given that it’s gender-reversed, this is more a production for purists. The simplicity of the design and staging pushes all focus onto the dialogue, which in theory is a great thing, but in practice sometimes heavy going.