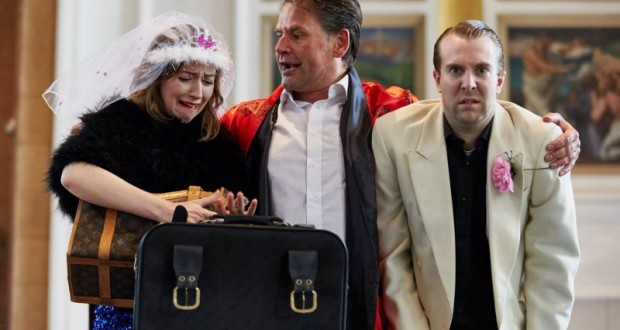 Pros: Atmospheric and unique venue, superb singing, highly entertaining, opening up opera to everyone. Cons: Access restrictions would prevent some from attending at this specific location. The Thames Tunnel: a feat of engineering, the world’s first underwater tunnel, a theatre venue and a modern commuter route conveying trains and thousands of passengers every day. Hold on, a theatre venue? Yes, that’s right. The tunnel’s original entrance shaft dating from 1825, looked after by the Brunel Museum, is now playing host to a variety of concerts and performances. It was for this purpose that I found myself crawling through a deceptively small passageway and down approximately&hellip;

Demystifying opera, this production was enjoyable no matter what your knowledge or experience of the genre. Meticulously performed. A unique and inspiring venue, but access is tricky.

The Thames Tunnel: a feat of engineering, the world’s first underwater tunnel, a theatre venue and a modern commuter route conveying trains and thousands of passengers every day. Hold on, a theatre venue? Yes, that’s right. The tunnel’s original entrance shaft dating from 1825, looked after by the Brunel Museum, is now playing host to a variety of concerts and performances. It was for this purpose that I found myself crawling through a deceptively small passageway and down approximately fifty feet of scaffolding steps to watch Popup Opera’s production of Rossini’s L’Italiana in Algeri.

The venue did not disappoint. It had everything you would expect from a 190 year old underground tunnel shaft. A drop in temperature, an underlying smell of damp, the occasional sound of trains rumbling below your feet and the ability to make you instantly lose your sense of time and space. The atmosphere was palpable. As I took my seat I wondered how the performance would be able to compete with such an overwhelming backdrop. If the venue was inspiring however, the performance matched it in every way.

In Popup Opera’s adaptation, Rossini’s story is set in the Las Vegas casino The Algeri. It follows a complicated and entangled series of events between the casino proprietor Mustafa and his wife Elvira who he wants to marry off to an indebted employee Lindoro. Lindoro already has a girlfriend though, Isabella (the Italian ‘American’ girl of the opera’s title), who attempts to rescue Lindoro from his predicament despite already having another lover Taddeo, whom she brings along for the ride. The plot weaves back and forth between characters with increasing complications as they each try to dupe the other to gain love, power, money, or all three.

Whilst the plot was confusing, everything else about the production felt like it had been engineered towards simplicity. The set was minimal and multifunctional, lighting was static, the music was (astonishingly) performed by a single pianist and costumes were straight forward but used effectively to define characters, locations and scenarios. There was nothing unnecessary or ostentatious. The songs were sung in Italian but with English subtitles. These were not word for word translations however, but snapshots paraphrasing the action and giving the audience the gist of the dialogue taking place. They were also extremely witty, described in the programme as ‘Eurotrash inspired’. For me it was the subtitles that really helped to make the plot more accessible, particularly as I don’t speak Italian. They set the tone for each scene, helped you to decipher the scenario and in doing so allowed you to relax, enjoy and really appreciate the music and the performance from the cast.

Each member of the cast gave a strong performance. Not just the quality of the singing, which was superb, but also the acting. The choreographed use of space, interaction with props and the physicality between characters was layered so meticulously it appeared effortless and natural. There were times that I genuinely forgot I was watching an opera. Having been initially concerned that I might not understand much of what was going on, I found myself laughing at the humour, empathising with the tragedy and feeling elated at the triumphs.

One of the draw backs for me was the seating. Due to the popup nature of the venue the seating was arranged in rows all at the same level. I wasn’t tall enough to see round some of the loftier audience members in front of me, which meant I did miss out on some of the action on stage. I’d suggest getting there early to have first dibs on the front rows. My other concern was around accessibility of the venue. Being a tunnel shaft, the entrance was not as straight forward as a regular performance space – via a short and very low doorway/passage and scaffolding steps. This information was clearly indicated on the company’s website and the show is being performed at other venues in London, so if this is a consideration for you, one of the alternative locations might be more suitable.

Whether you are a regular opera attendee or a novice like me, I think there is something that everyone will enjoy about Popup Opera’s production. Witty and sincere with wonderful performances from the cast, I highly recommend you go along.