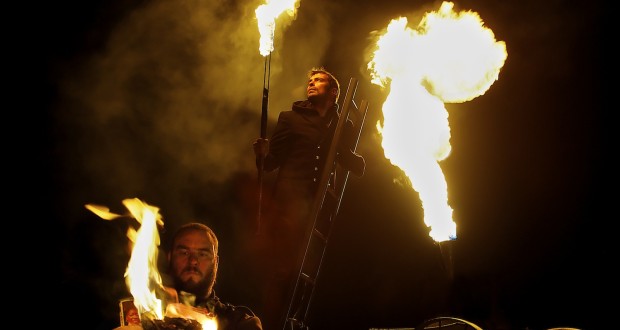 Pros: Visually stunning, genuinely immersive, thought provoking.  Cons: Unfortunately it’s not billed for another London performance any time soon. 451 is an immersive theatre production based on Ray Bradbury’s 1953 novel Fahrenheit 451. It explores the idea of a society where all books have been banned and the job of ‘firemen’ is not to put out fires, but to track down and burn books and to punish anyone found harbouring them. The performance is part of the Greenwich and Docklands International Festival, and takes place outside in Bethnal Green Gardens. It begins at 10pm, just as it is getting&hellip;

An absolute must-see show. Captivating story telling. A poignant theme for our time.

User Rating: 4.75 ( 2 votes)
451 is an immersive theatre production based on Ray Bradbury’s 1953 novel Fahrenheit 451. It explores the idea of a society where all books have been banned and the job of ‘firemen’ is not to put out fires, but to track down and burn books and to punish anyone found harbouring them.

The performance is part of the Greenwich and Docklands International Festival, and takes place outside in Bethnal Green Gardens. It begins at 10pm, just as it is getting dark. As I enter the performance area I am quietly handed a torn page from a book. The page is charred around the edges and across the text in red ink the word ‘banned’ is stamped. As I continue to walk further into the space I can see other audience members also clutching torn pages. The set is clearly visible and made up of a number of large looming metal structures: platforms, ladders, flaming torches and tall aerial poles. Metal cordon barriers help the audience to know where to stand. As we mill around, clutching our torn pages, a loud tannoy makes announcements such as “happiness is more important than knowledge”. This, and other phrases are repeated in different languages, as well as the sound of jet planes swooping terrifyingly close. It feels like I am in a scene from a disaster movie, and as more and more people arrive a sense of heightened anticipation grows.

Almost all the action takes place above ground level, with performers mounted on platforms, smoke billowing out round them, or climbing aerial poles which are 30 feet or more in the air. Everything feels bolder and larger than life with a combination of physical action, acrobatics, a harrowing musical score, sound scape and superbly written text, some pre-recorded and some live. The use of real fire and pyrotechnics, with books exploding as if shot and blown apart in mid air, pages fluttering around the crowd, creates powerful and symbolic imagery – something that is at the heart of the performance.

From the very beginning the audience is completely immersed in the world of 451. ‘Fireman’ addresses the crowd as ‘citizens’ and speak to us of our duty to help fight against anyone in possession of a book. As they pursue suspects, weaving through the crowd on giant metal segways, we part ways to let them through. Wherever the performers go we follow, moving around the space in waves eager to see what happens. At one point we are asked to pass our pages forward to add them to the fire; the crowd responds with an incomprehensible roar. Some of us getting into the spirit of the performance; others clearly hesitant to comply in what feels like an very alien act. I cling tightly to the page in my hand.

The subject of book burning is highly provocative. It is not simply an act of vandalism but challenges the belief in the principles of freedom of speech and freedom of expression. In the performance books are replaced by modern technology which we are told provide happiness and safety for citizens, monitoring and censoring their every move. It is after all “what you voted for” we the audience, as citizens, are sickenly reminded. A message that resonates as strongly today as it ever has.

The story itself follows Montag, a ‘fireman’ whose love of books compels him to break free from the propaganda of the state. After a lengthy pursuit he eventually manages to join a handful of other like-minded citizens. Together they hope to preserve the heritage of the written word. One by one they plan to read, memorise and share the stories that remain. A symbolic return to the simple traditions of story telling.