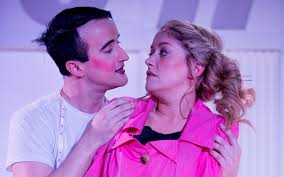 Cons: Some teething problems in terms of pace, volume and movement; a bit rough around the edges.
Shock Treatment, King’s Head Theatre – Review

Pros: Great cast, brilliant songs, laughter and sexual deviancy throughout. Cons: Some teething problems in terms of pace, volume and movement; a bit rough around the edges. Ever since it was announced that Shock Treatment – Richard O’Brien’s sequel to cult phenomenon The Rocky Horror Picture Show – would be coming to the stage, die-hard fans and cross-dressing enthusiasts the world over have been shivering with antici………..pation. While the film itself was seen as a critical and commercial flop (as indeed was its predecessor, though to a lesser extent), it became a cult favourite in its own right, and&hellip;

Beautifully bizarre and wickedly entertaining, this show will only get better with time.

Ever since it was announced that Shock Treatment – Richard O’Brien’s sequel to cult phenomenon The Rocky Horror Picture Show – would be coming to the stage, die-hard fans and cross-dressing enthusiasts the world over have been shivering with antici………..pation. While the film itself was seen as a critical and commercial flop (as indeed was its predecessor, though to a lesser extent), it became a cult favourite in its own right, and has now been shocked back to life in this hour and a half long stage musical version. The plot, heavily adapted to great effect by Tom Crowley, centres on the protagonists of the show’s predecessor: dippy, squeaky-clean(ish) and newly married Brad and Janet Majors. After being duped into appearing on a reality TV show for failing marriages, the couple are once again subjected to a whirlwind adventure of sex, violence, and incredibly revealing costumes.

Julie Atherton is the ‘big name’ draw here, and her performance more than justifies this tag: displaying incredible range in performance and singing styles with a voice to die for, her Janet goes from sickly sweet to sizzlingly sexy with consummate ease. She is joined by the brilliantly dark combo of Nic Lamont and Adam Rhys-Davies as insidious sibling doctors Nation and Cosmo McKinley. The two already perform together as darkly comic duo The Twins Macabre, and it shows – their chemistry is electric, and their dynamic reflects that of Richard O’Brien and Patricia Quinn in the best possible way.

There is also a stand-out turn from Mateo Oxley as narcissistic TV host Ralph Hapschatt, whose facial elasticity and comic timing are matched only by his fantastic singing voice. He seemed to take as much relish in supporting his fellow cast members in their big moments as having the audience in stitches during his. There were also great supporting performances from Rosanna Hyland, Mark Little and Ben Kerr. Perhaps my only gripe about the show itself was that we didn’t see more (in terms of stage time, not…other things) of Kerr, perfectly cast as loveable drip Brad.

Not only were the cast fantastic, but the production had for the most part an incredibly slick and professional feel. Lucie Pankhurst’s choreography perfectly complimented each number (and with a little more practise will look just as good as it ought to). The set and lighting (Tim Shorthall and Nic Farman respectively) though not extravagant, was wonderfully atmospheric and effective; and the musical direction of Alex Beetschen was hugely accomplished. I love seeing MDs on stage as part of the performance, supporting and guiding the performers whilst loving every minute of the music. And what music! From the hilariously kitschy opener ‘Denton, USA’, to the smokingly sexy ‘Looking for Fame’, to this show’s very own ‘Time Warp’, ‘Little Black Dress’, the show boasts a hugely memorable score of sixteen tracks that really deserve to be heard (though the performers’ mics needed turning up a bit!).

All in all, this is a show that should delight not just the die-hards, but all fans of musical theatre and a slice of the dark side. With a story that’s easier to follow than its prequel, a stonking soundtrack, and masterful vision throughout by director Benji Sperring, this is a show that deserves a transfer and a long run. With some development, perseverance, and a little extra voltage, it just might get there too.

Previous: Rise Like a Phoenix, Above The Stag – Review
Next: Dead Royal, Ovalhouse – Review