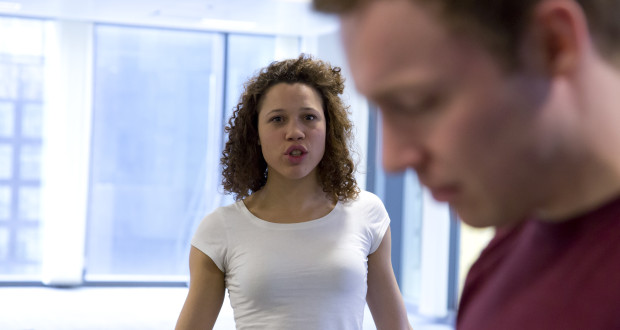 Pros: An incredibly skilled cast with a great sibling chemistry – they will make you both smile and cry.

Pros: An incredibly skilled cast with a great sibling chemistry – they will make you both smile and cry. Cons: The set design is pretty bold, which means sacrificing some flexibility. Given the glorious burst of heat and sunshine in the capital this week, the New Diorama Theatre took the opportunity to open their doors. Café and theatregoers were spilling out of the narrow venue when I arrived, engaged in conversation as they draped themselves across the various seats and perches of Regent’s Place outside the theatre’s entrance. A very welcoming atmosphere to this refreshingly clean, easily accessible and&hellip;

A funny but sad story about what real love between a family looks and feels like, delivered by a super cast. Ella Carmen Greenhill is surely a playwright to keep an eye on.

User Rating: Be the first one !
Given the glorious burst of heat and sunshine in the capital this week, the New Diorama Theatre took the opportunity to open their doors. Café and theatregoers were spilling out of the narrow venue when I arrived, engaged in conversation as they draped themselves across the various seats and perches of Regent’s Place outside the theatre’s entrance. A very welcoming atmosphere to this refreshingly clean, easily accessible and modern-styled venue, that boasts groovy orange branding – lots to like.

Plastic Figurines, by Ella Carmen Greenhill, focuses on a brother and sister relationship, and more specifically on how that relationship behaves and develops before, during and after the death of their mother from leukaemia. Since this is a two-hander with siblings Rose and Michael (who has autism) taking centre stage, their mother and the illness she suffers from infiltrates the plot in a very indirect way, mostly remaining on the boundaries of conversation. Given how emotionally draining the play would have felt had it focused on leukaemia and its literal destructiveness, I was grateful that it centres instead on the familial love that is both the cause and the cost of the siblings’ grief.

Rose and Michael have a wonderful sibling chemistry, their interaction on stage at times funny, sometimes confrontational and at other times touching. Jamie Samuel is utterly convincing as Michael, exhibiting the truculent attitude of an 18 year boy alongside the recognisable sensitivities of a person with autism in his responses to touch and the way he communicates with Rose. Rose herself, played by Remmie Miller, won the audience over as the protective and patient older sister, bearing responsibility for her independent but challenging younger brother. The dialogue is incredibly natural; it’s evident to my mind that the playwright has experience of the actions and emotions that she has written with such sincerity and frankness in Plastic Figurines.

Miller and Samuel do the script great justice and their performances are easily the highlight of the night. In terms of set design, I’m not similarly sold. The main structure of the set is quite elaborate: two walls with semi-transparent windows thrust out onto the stage to create the illusion of a hospital hallway, with imagined treatment rooms and operating theatres beyond its entrance door. The characters spend most of their time downstage in the ‘waiting room’ area which is littered with chairs, and this space also functions as other locations and rooms. Symbolically I think the design really works, because the mother is literally kept behind closed doors. This mirrors the conversation between Rose and Michael, in which both work hard to avoid naming their pain. However, when the play transitions to a different location there is no physical set change and the hospital backdrop is pretty overwhelming. The visual serves a purpose, but still a set change, however minor, might be something worth exploring.

The music is definitely worth a mention. Coming into the theatre, the steady pace and sedated tone of the music really put me in the right state of mind to watch the play. Miller was already on stage, and though normally I don’t think much of actors loitering as we sort out our coats and bags, in this instance it serves a purpose – her face tells a story by itself. All in all Plastic Figurines is a touching story that looks at serious family and life events, but always with hope.