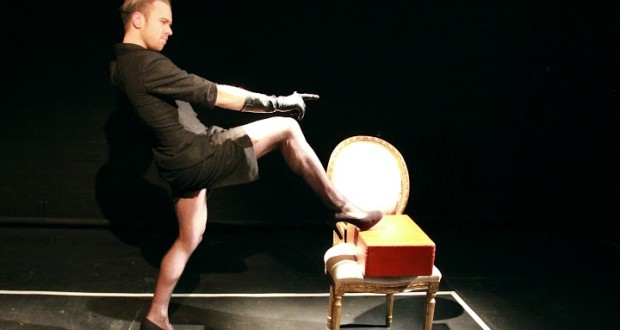 Pros: Lots and lots of brilliantly bitchy one-liners. Cons: The pink, slimy elephant in the room. I must start with the vomit. Because otherwise it will interfere with my concentration, just as it did during the play. About two minutes into Dead Royal Wallis Simpson, played by Chris Ioan Roberts, vomits pinkly due to a shellfish intolerance that she refuses to acknowledge, for fear of being common. Now I have a strong stomach; projectile vomiting on stage doesn’t phase me. Nor could anyone ever accuse me of being a neat freak. But Roberts had to walk over and around&hellip;

A guilty pleasure. Camp and silly, but not without flashes of insight.

I must start with the vomit. Because otherwise it will interfere with my concentration, just as it did during the play. About two minutes into Dead Royal Wallis Simpson, played by Chris Ioan Roberts, vomits pinkly due to a shellfish intolerance that she refuses to acknowledge, for fear of being common. Now I have a strong stomach; projectile vomiting on stage doesn’t phase me. Nor could anyone ever accuse me of being a neat freak. But Roberts had to walk over and around this lurid, slippery mess for the remaining 48 minutes of the show. It clearly impeded his movement around the stage, and my inner Health and Safety Officer found it quite stressful. If I could have jumped up and swept it off the stage then I would have done. But now that I have metaphorically swept it from my mind, I can carry on with the review.

Chris Ioan Roberts has put together a very funny show, based on a clever conceit. Elderly, jaded Wallis is waiting in her Paris apartment for the arrival of Lady Diana Spencer, shortly before the latter’s wedding to Prince Charles. Wallis is on a mission to derail the royal wedding, and save Diana from a fate like her own – left to rot in exile, vilified and shunned by her husband’s family. But Roberts doesn’t try to make Wallis an object of sympathy. His Wallis is narcissistic, bitchy and acerbically witty. She rants at the servants who hide offstage, and when she can’t quite remember the name of one maid, resorts to calling her Orangina.

Diana, who appears in the latter part of the show, and is also played by Roberts, is disillusioned, cynical and, funnily enough, just as bitchy as Wallis. With Wallis absent, Diana plants herself on the sofa, lights up, moans about Gone With The Wind being too long to read….or even watch….and then stubs out her fag in a Charles and Di souvenir mug.

The set, Wallis’ apartment, is all icky pastels and 1980s audiovisual equipment. Both characters decide to freshen the air by spraying a rather sickly perfume around the room, and it all adds up to create a cloying and artificial environment. Music includes Grace Jones, and the theme from Gone With The Wind, which might allude to Wallis’ public image as a pantomime baddie, versus the image she has of herself as the resourceful heroine.

Ultimately, this show is all about the one-liners. It promises to be ‘lacerating’ and ‘camp-drenched’, and does not disappoint on either front. The bitchy quips just keep coming, and are a guilty pleasure for being so cruel, and yet so totally on the mark. How, wonders Diana about Charles, can one man have so many opinions? She might be better able to bear them if kissing him were not like “kissing roadkill from behind the radiator.” For her part, Wallis laments that her servants buy cannibal lobsters, so that she risks serving ‘lobster babushka’ to her guests. She describes Diana, in her engagement photo, being ‘swaddled in a blue carpet sample’, and asserts that if your life has not been turned into a four-part miniseries, then you haven’t really lived! I would worry about giving too much away, but really, there is plenty more where that all came from.