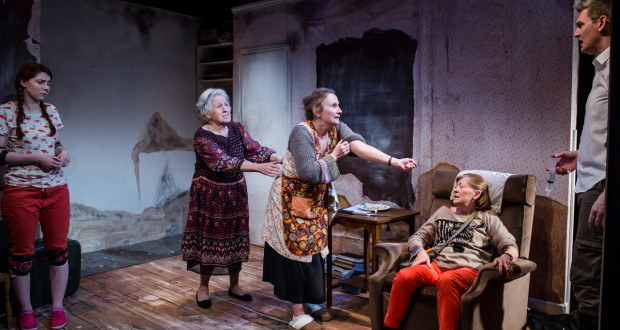 Pros: An interesting idea with some chilling real-world parallels.

Pros: An interesting idea with some chilling real-world parallels. Cons: Heavy-handed and plodding with some so-so performances. Animals – set in a dystopian but not unrecognisable future – concerns itself with a sort of distorted, extreme Utilitarianism. A person’s value in society is solely determined by their productivity: when people stop being useful, they’re finished. It’s the territory of many a sci-fi novel/film/play but beyond this, Animals explores issues such as gender roles, education and sexuality. The story takes place over a 24-hour period in the year 2046, on a run-down estate. The elderly but resourceful Norma is struggling&hellip;

Animals poses some truly challenging questions about where our society is heading but the execution of these ideas, at least at present, is a little clumsy.

Animals – set in a dystopian but not unrecognisable future – concerns itself with a sort of distorted, extreme Utilitarianism. A person’s value in society is solely determined by their productivity: when people stop being useful, they’re finished. It’s the territory of many a sci-fi novel/film/play but beyond this, Animals explores issues such as gender roles, education and sexuality.

The story takes place over a 24-hour period in the year 2046, on a run-down estate. The elderly but resourceful Norma is struggling with a crossword puzzle along with live-in help Joy and neighbour Helen, in order to win some money or food. Their under-the-radar existence is thrown into chaos by the arrival of Maya, daughter of jobsworth government inspector Noah, who has wandered off from his care.

We are introduced slowly to the dystopian future that is this play’s setting with hints dropped about permits, regulations and banned words, but the subtlety is quickly lost and we are then bashed over the head repeatedly with the rules of the new society. Although these details are predominantly plot or character-pertinent, there are some that don’t seem to have any bearing on the plot, like pretending the weather doesn’t exist. This over-writing in the exposition is a problem common in much of the piece. The running time could have been cut significantly by taking a red pen to repetitive sections where we would watch a character report action we had already witnessed.

This may have also helped the actors, who seemed to be struggling with their text at some points. The occasional interrupting of each other’s lines, which happens a lot to casts in early nights of the run, became whole sections where I was completely terrified the actors wouldn’t get to the end of their lines. There are some strong moments however in the performances, particularly for Sadie Shimmin who showcases great depth as Joy, who initially seems like the butt of the jokes but soon becomes a character of gumption. It’s hard to rate many of the other performances as the writing leaves little room for nuance, so it feels harsh to criticise them for being brash.

The design is simple and effective, with Max Dorey utilising all the nooks, crannies and capabilities of the space effectively. A screen neatly divides the up and downstage areas to create Norma’s living room and garden, and the stage easily transforms into the gritty city streets and the stratosphere of Maya’s imagination with some neat lighting and projections. There is also some fittingly futuristic music that mixes in video game effects with some chunkier beats. The music is especially noticeable three-quarters of the way through, when the play inexplicably shuffles past a natural conclusion and keeps going for a painfully slow five to ten minutes.

The ideas behind Animals are definitely strong and worth exploring through drama, but establishing the rules of the futuristic setting takes so long that the play resorts to shortcuts in writing and performance for pathos, which ends up somewhat cheapening it. As much as I love seeing new writing from women, with a female director at the helm (an occurrence uncommon enough to remark on it) there was a definite lack of pace and smarts in Animals.