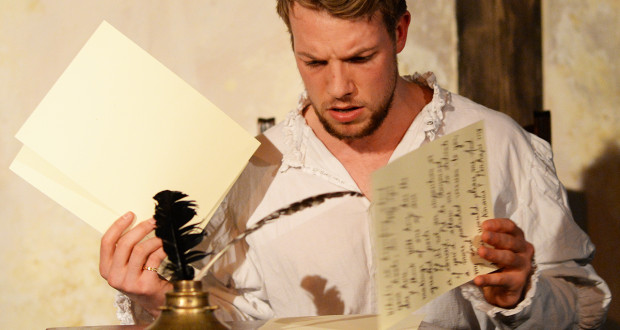 Pros: The playwrights clearly know and love their subject matter, and the result is some really excellent Marlowe and Shakespeare fanfiction.

Pros: The playwrights clearly know and love their subject matter, and the result is some really excellent Marlowe and Shakespeare fanfiction. Cons: The acting is occasionally clunky, and the sexual characterisation of several roles seems far-fetched for 16th century England. The Dead Shepherd tells the story of Christopher (or Kit) Marlowe, contemporary and fellow playwright of William Shakespeare. Whereas Will tends to get most of the credit these days, back in 1593 it was a different story: Will was the new kid in town and Kit was the big man, the ‘shepherd’ of the London playwrights. When Will goes&hellip;

A gripping play that expertly blends fact and fiction.

The Dead Shepherd tells the story of Christopher (or Kit) Marlowe, contemporary and fellow playwright of William Shakespeare. Whereas Will tends to get most of the credit these days, back in 1593 it was a different story: Will was the new kid in town and Kit was the big man, the ‘shepherd’ of the London playwrights. When Will goes to Kit looking for help with his play Henry VI, it quickly becomes apparent that Kit’s taste for trouble goes beyond the stage; he is also a spy, involved with a dangerous secret society of scholars and atheists called ‘The School of Night’. Then the new Secretary of State, the straight-laced Sir Robert Cecil, arrives, and unlike the rest of London, he’s not a fan of Kit’s . . .

If I had one point of criticism in terms of plot, it would be that The Dead Shepherd is overly concerned with sexuality. There’s hardly a character on stage Kit hasn’t had an affair with, and the lingering touches and wandering eyes during the School of Night meeting suggest its members get up to rousing activities that go way beyond debating. Don’t get me wrong, I love good sexy times in all possible gender combinations. But why playwrights Robert Pope and Ian Dixon-Potter have chosen to put quite so much focus on Kit’s sexual preferences is a mystery to me; between his spying, his religious and scientific curiosity and his casual lack of respect for authority, it’s by far the least interesting of his ‘vices’ and also the least relevant one in the context of the story.

Nevertheless, as a whole the play is gripping. It’s pleasantly pacey, and the playwrights have found the perfect mix of fact and fiction to produce a captivating and convincing story. The references, quotes and bits of historical evidence that are meticulously woven into the script clearly show a lot of dedication on the part of the authors, so when I say this is a proper work of fanfiction I mean that in the best possible way.

That dedication and enthusiasm extends to the cast as well, who play their parts with evident enjoyment. There’s the occasional fluffed line, and at times the acting is simply too big for the intimacy of the White Bear Theatre’s small auditorium. Still, these are minor criticisms in the grand scheme of things, since they’re more than made up for by the strong moments of the performance. Gianbruno Spena is especially fantastic as the cautious, yet still naïve country boy Will, and Ben Scarles is a likeably smarmy Kit. In terms of staging this is very much a fringe performance: there are a few props, the costumes are basic and the set is non-existent. The play is however fascinating enough by itself without any of these trimmings, and in such a small venue they’d probably be more of a hindrance than a help anyway.

Altogether The Dead Shepherd is an exciting play full of secrets and intrigue, an early modern equivalent of The Da Vinci Code if you will. But, unlike Dan Brown’s biggest hit, it has the advantage of putting the spotlight on a great playwright who, quite unjustly, is too often overlooked in favour of his superstar friend Shakespeare. Now, excuse me while I go look up my Edward II.

Previous: Stevie, Hampstead Theatre Review
Next: All the Things You Said You Never Said Before You Thought You Could Ever Say, Ovalhouse – Review 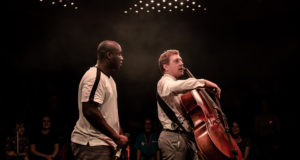 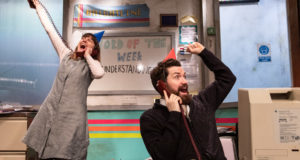