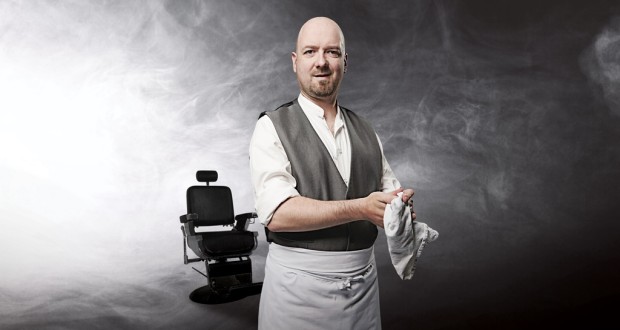 Cons: Some of the writing is a little obvious and expositional, which means it mostly works for the younger audience.
The Chair, Unicorn Theatre – Review

Pros: Gary Lagden is completely spellbinding as old-timey barber and storyteller O.D. Sawyers. Cons: Some of the writing is a little obvious and expositional, which means it mostly works for the younger audience. The magic of The Chair begins before we even take our seats in the theatre, before the lights go down as we are guided into the space through a wooden walkway and then must enter by ducking under a sign that reads ‘O.D. Sawyers Barber and Purveyor of Fine Goods’ and through a small door. Not all of the audience members had to duck though; I&hellip;

Although the writing could do with some tightening to increase its cross-generational appeal, Lagden’s onstage presence is so captivating and the props and sound are so well worked that this short piece stands up.

User Rating: 4.9 ( 1 votes)
The magic of The Chair begins before we even take our seats in the theatre, before the lights go down as we are guided into the space through a wooden walkway and then must enter by ducking under a sign that reads ‘O.D. Sawyers Barber and Purveyor of Fine Goods’ and through a small door. Not all of the audience members had to duck though; I was happy to see that even at a press night, the front rows were populated with young kids, the demographic that the production is actually aimed at.

Our host, barber O.D. Sawyers (Gary Lagden) involves the audience right away. After we watch a pretty gruesome tooth extraction that Sawyers performs on his dogsbody Lars (Christopher Preece), he looks around and asks, “Who’s next?”. He takes a volunteer from the audience and begins his stories as he combs the child’s hair; much to our collective relief, he doesn’t use the scissors in his hand.

Sawyers’ tales are full of wonder, suspense, magic and adventure. Lagden ably creates far-off worlds, slipping easily between the different characters that populate his stories. The narratives weaved by Lagden are enhanced by the visual and aural effects created by very simple means. Preece uses a piano, a drum and a sheet to create the sights and sounds of a moonlit night, a storm on the high seas and a visitation from the spirit of an ancient Egyptian princess. What most impressed me was that the musical instruments were used as physical objects for what they look like, not just what they sound like. It’s inventive and fun.

The lighting effects used in the piece are also striking, using light flashes alongside snap blackouts to create absolute terror in the audience. I can say this for certain because several young spectators issued bloodcurdling screams at some of the more dramatic effects. As silly as it may have seemed to me, its ability to evoke such fear in the audience is all part of the magic of the show and indeed of theatre as an art form. I’m sure the show experience was far more exciting for those screaming kids than for the too-cool-for-school boys sat in front of me, who loudly speculated how each effect was being created.

The show experience overall is a good one, and totally involving for the kids it’s aimed at. My only problem is with some of the tired, expositional phrases that crept into the writing such as “as you know…” and “remember that…” They made me cringe and meant that The Chair isn’t quite the cross-generational hit it could have been. The stories Lagden tells are interesting but often tail off to an indefinite conclusion. I couldn’t help but feel that if the whole structure were tightened up a bit, the kids wouldn’t be squirming at the end of the show, ready to leave (The Chair runs at less than an hour), but would still completely enchanted by the magic of storytelling and the mythical world created by Cardiff barber O.D. Sawyer.