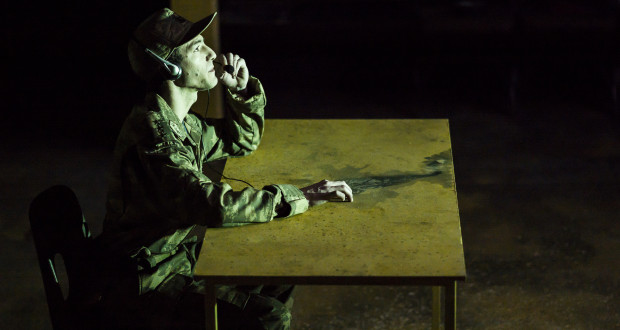 Cons: Multiple layering of storylines and messages occasionally made the overarching narrative difficult to follow.
Shrapnel: 34 Fragments of a Massacre, Arcola Theatre – Review

Pros: Passionate new writing. Challenging subject matter. Great acting. High production values. Cons: Multiple layering of storylines and messages occasionally made the overarching narrative difficult to follow. A highly provocative performance, Shrapnel: 34 Fragments of a Massacre is based on the true story of the 2011 Roboski massacre, when 34 unarmed civilian smugglers - crossing the Turkish-Iraqi boarder - were killed by Turkish Armed Forces. The play however, is not simply a retelling of this tragic event. On the contrary it sets the massacre within a much wider context and challenges the audience to consider the very nature of&hellip;

A strong, provocative play which challenges your understanding and perception of war.

A highly provocative performance, Shrapnel: 34 Fragments of a Massacre is based on the true story of the 2011 Roboski massacre, when 34 unarmed civilian smugglers – crossing the Turkish-Iraqi boarder – were killed by Turkish Armed Forces. The play however, is not simply a retelling of this tragic event. On the contrary it sets the massacre within a much wider context and challenges the audience to consider the very nature of modern warfare itself.

The play unfolds through a series of 34 short scenes, a symbolic gesture to the number of victims of the massacre. There are six distinct but overlapping storylines which explore events from a number of different perspectives. This includes the smugglers themselves, their families, soldiers of the Turkish Armed Forces, journalists, news reporters and even workers from the arms factory who manufactured the drone that carried out the air strike. Each different perspective sheds light on the complexity of modern combat and poses difficult questions around the accountability of war.

One of the plays strongest themes is what the author Anders Lustgarten describes as “malice by proxy”. When drones are used to carry out attacks, authorised by persons located hundreds or thousands of miles away from their targets, people who will perhaps never experience in person the consequence of their actions, where and with whom does the sense of responsibility for these events lie? The play suggests that drones and other methods of ‘virtual’ combat have dehumanised war, despite the immense human impact these actions have. This is just one of the many implicit questions embedded in the heart of the play, running as a simmering undercurrent to the action on stage.

The challenging nature of the subject matter is intensified by the intimacy of the performance space. The audience sits on two sides of the performance area, with no more than five or six rows each side. The space is sparsely set, the use of earthy, arid colours evoking a sense of the Turkish mountains but also creating a sense of desolation which heightens the action taking place on stage. A large screen is located on one side, displaying images which help to locate each scene. I found the most effective of these to be the drone footage which was shown each time a scene with the smugglers was taking place. It gave the audience a feeling of watching through the eyes of the drone in real time, as if we were also complicit in the events that were unfolding.

Due to the multiple layering of storylines there were moments when I found it difficult to follow the overarching narrative. Particularly as the different stories didn’t always seem to follow a linear sequence of events. However, the versatility and strength of the actors performances really carried the story through and by the end I felt satisfied that there was nothing that had been left unexplained or incomplete. With just six actors for fifteen different parts I was particularly impressed by the casts ability to double up roles, moving seamlessly from one scene to another sometimes changing location, costume and accent all in one go.

This was a highly accomplished and impressive performance. There were layers of meaning overflowing from each and every moment. A strong combination of great acting, writing and direction as well as set, stage and lighting design. Shrapnel doesn’t just entertain it also makes you think; an eye opener to the politics and human impact of war.

Previous: The Cutting Of The Cloth, Southwark Playhouse – Review
Next: Lovesong of the Electric Bear, The Hope Theatre – Review