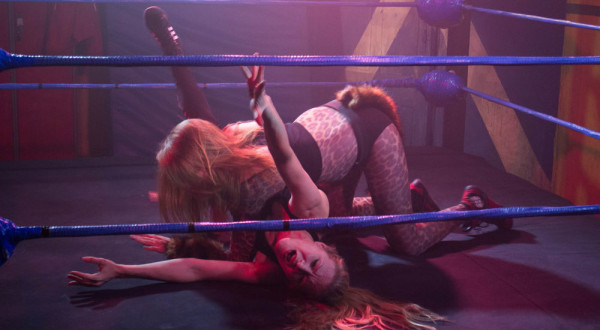 Pros: An excellent cast bring to life a strong piece of writing. Cons: Cramped and crowded seating conditions at the Old Red Lion There’s a phenomenon sweeping the stages at The Old Red Lion. It’s Lardo, the story of a chubby young Scotsman who dreams of making a name for himself in the world of wrestling while navigating a very tricky coming of age journey. Lardo brings together a range of well developed characters to support a story of secrets and deception – but does so with a strong moral at its heart. The performance covers some tricky subject&hellip;

Energetic, touching, and tremendously funny – this show has its heart in all the right places.

There’s a phenomenon sweeping the stages at The Old Red Lion. It’s Lardo, the story of a chubby young Scotsman who dreams of making a name for himself in the world of wrestling while navigating a very tricky coming of age journey. Lardo brings together a range of well developed characters to support a story of secrets and deception – but does so with a strong moral at its heart. The performance covers some tricky subject matter, but leaves audiences full of hope that doing the right thing is, quite simply, always the right thing to do.

It’s well-written, well-acted, and a very high-energy evening of entertainment. The design is perfection: the stage has been transformed into a wrestling ring and the audience surrounds it in stadium seating. The walls are ideal for bringing to life a tired, underfunded and dirty wrestling club in Scotland.

The production relies on the audience to bring the atmosphere of the wrestling club alive – when the wrestling match takes place, the audience in the theatre become the audience at the match. There’s such an excellent jovial mood concocted in this dark and smoky room that shouting along in support of Lardo doesn’t feel at all forced or concocted.

You can’t help but want Lardo to do well. This is largely in part to an absolutely wonderful performance from Daniel Buckley as the wrestler. Lardo’s not the sharpest knife in the drawer, but he sees the world as a possibility. He believes in his own ability to make change for himself – and also sees potential in girlfriend Kelly (a charming and sensible Laura Darrall) to achieve her own dreams when it comes to her turtle studies. His belief in the ability of good to triumph leaves him vastly open to others taking advantage of him, as they well do – and truthfully, his youthful naivety and reluctance to grow up does result in some extremely bad decisions on his journey.

There are many layers to this story, and each is brought to life brilliantly by a strong supporting cast. Nick Karimi is a force to watch as sociopathic match promoter Stairs. He’s electric and full of tremendous personality.

Strong accolades are also due for Zoe Hunter as Mary. Initially her character is presented as a part of the ‘spectacle’ of wrestling; she’s a tough as nails female wrestler in skimpy clothes who takes no prisoners. But as the play progresses, her character evolves and reveals itself to be one of the key people driving the storyline forward. Hunter is excellent; she fully showcases the range of emotions and personas that the character of Mary is holding together. She creates a Mary who, on the surface, appears at her strongest when shouting and dominating in the wrestling ring, but who in truth is at her strongest when quietly pledging support to enemy Cassie (Rebecca Pownall.)

It is also interesting to look at the relationship between Lardo and Derek (Stuart Ryan). Derek is the father of Lardo’s girlfriend, Kelly, could have easily served as source of conflict (for as we know from writing, all Dads are over protective of their daughters). But in this nuanced script, the relationship is very different – even though Lardo makes mistakes to the detriment of Derek’s daughter, Derek continues to act as a father figure to Lardo and the friendship and respect between the two men is a very unique and positive one to have brought to life on stage.