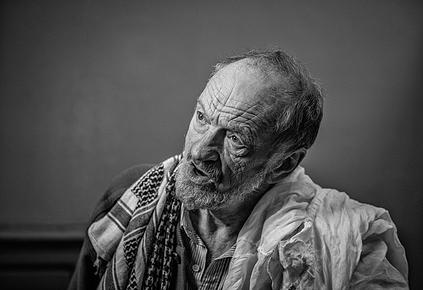 Pros: Remarkable performances, haunting music and a spectacular backdrop make this production unmissable. Cons: Three hours later you’ll leave awed, but freezing cold! There is something particularly poignant about staging a performance of King Lear in a former sanctuary for the elderly. The Malachites’ production makes wonderful use of the formidable, crumbling chapel of Peckham Asylum; its distressed walls eerily lit by candlelight and its beautiful stained glass windows bringing colour to the grey brick walls. The tale of the ageing king who descends into madness is one of Shakespeare’s greatest tragedies and The Malachites, with John McEnery in the&hellip;

A powerful and visually breathtaking production of Shakespeare’s great tragedy, performed in one of London’s most fascinating spaces.

User Rating: Be the first one !
There is something particularly poignant about staging a performance of King Lear in a former sanctuary for the elderly. The Malachites’ production makes wonderful use of the formidable, crumbling chapel of Peckham Asylum; its distressed walls eerily lit by candlelight and its beautiful stained glass windows bringing colour to the grey brick walls. The tale of the ageing king who descends into madness is one of Shakespeare’s greatest tragedies and The Malachites, with John McEnery in the title role, do it every justice in this visually stunning production.

This is a heartbreaking tale of fatherly love and royal vanity, the treachery of brothers and sisters, and the fragile nature of the human mind. King Lear, planning to divide his kingdom among his three daughters, asks them to tell him how much they love him. His first two, Goneril and Regan, readily sing his praises, but his third, and most beloved daughter Cordelia, refuses to bow to his vanity. Enraged, he banishes her from his kingdom. Horror and strife follow, as Goneril and Regan ostracise their father and are left to their wicked scheming.

All performances are deeply moving; every actor puts their heart and soul into the production. Stand-out performances are delivered by Samuel Clifford as the Fool, Nick Finegan as the calculating Edmund and Ludovic Hughes as Edgar, who prances daringly around the freezing stage in nothing but a cloth and a lot of make-up. Above all, however, stood John McEnery, who delivers the most remarkable and compelling performance, perhaps despite, but maybe because of a tendency to forget his lines. He is not an actor with little experience; his career includes a BAFTA-nomination for his brilliant performance as Mercutio in Franco Zeferelli’s important 1968 film Romeo and Juliet. However, memory does decrease with age, and Lear’s lines are not easy. In the programme, director Benjamin Blyth draws a parallel between the ageing actor having to search for his lines, and the aged king struggling to cling to sanity. It is a moving reminder that Shakespeare’s tales are often uncannily close to modern reality. While the frequent requests for his line could have been distracting, McEnery’s acting is easy and graceful enough to prevent this from being a problem.

The powerful nature of the play was underlined by a quiet mournful quartet composed of a medieval harp, a double bass, a mandolin and most strikingly, a piercing human voice, which seeped through the Asylum and painted a beautiful acoustic landscape of Lear’s struggle. Staff had thoughtfully arranged blankets and generous cups of tea during the interval, which helped counteract the cold that slowly made my feet go numb. This is a deeply moving and compelling production of King Lear in one of South London’s most fascinating spaces, and one that brings Shakespeare’s striking genius to light.