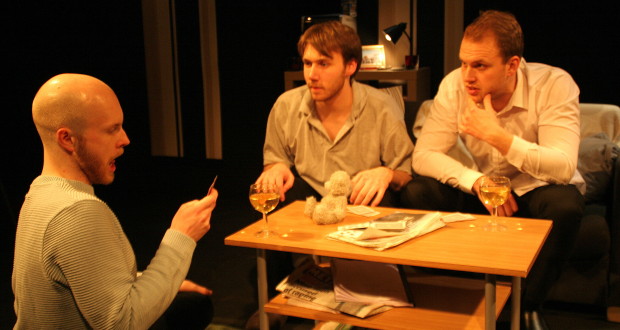 Cons: The ending was heart-warming but felt a little anti-climactic.
Found, The Hope Theatre – Review

Pros: Intriguing, funny and very relatable. Cons: The ending was heart-warming but felt a little anti-climactic. Found opens on a beach. Twenty-something year old Mark (Jack Harding) is attempting a jog, when he comes across a man (Joseph Lindoe) lying facedown in the sand. When the hospital gives the man the all clear, Mark offers him the sofa in his flat. He names the stranger ‘Jack’ and although he never speaks, Jack soon becomes a key influence in Mark’s life. The production has a cast of five actors, all of whom deliver their characters flawlessly and play off each&hellip;

An entertaining and engaging play, which will keep you guessing until the end.

Found opens on a beach. Twenty-something year old Mark (Jack Harding) is attempting a jog, when he comes across a man (Joseph Lindoe) lying facedown in the sand. When the hospital gives the man the all clear, Mark offers him the sofa in his flat. He names the stranger ‘Jack’ and although he never speaks, Jack soon becomes a key influence in Mark’s life.

The production has a cast of five actors, all of whom deliver their characters flawlessly and play off each other’s performances very well. Whilst it can be challenging to portray realistic characters set in the present day, in this case, the cast absolutely rise to the challenge and present a world that is extremely relatable. All three of the lead males are fantastic and Robert Saunders in particular stood out for me. His portrayal of next-door neighbour Brian was both touching and hilarious in equal measure. His comic timing is immaculate, delivering punch lines in a way that feels natural and spontaneous, rather than rehearsed. Brian is a multi-layered character; flamboyant and fun on the outside but who harbours a deep insecurity and pain. Saunders expertly reveals both sides of the character at once, through almost imperceptible gestures and vocal intonation. It’s really fantastic to watch.

Writer and director Luke Adamson does a great job of crafting characters that are not only interesting individually, but who also compliment each other as a group. Office worker Mark is so ‘normal’ that he provides the perfect backdrop for Brian and Jack’s antics. Equally, the two female characters Kate (Elizabeth Hope) and Hayley (Nina Bright) perfectly oppose one another. Kate is confident and devious, whilst Hayley is apologetic and sincere. I felt this combination of personalities made for an interesting ‘yin yang’ dynamic on stage.

Adamson’s direction combined with Lindoe’s performance, make Jack a thoroughly intriguing individual. On one level, I felt closer to his character than any of the others, yet simultaneously distanced, due to his lack of identity. The fact that this is all conveyed without the use of any conversational dialogue is extremely impressive.

With the exception of a couple of scenes, the majority of the play takes place within the small living room of Mark’s flat. As with the script and acting, the brilliance of the set design is in the subtle details. Everything from the overflow of old newspapers to the random collection of mugs, reminded me of every young professional’s flat I’ve ever seen.

Sound also plays a key part in this production as classical and electronic music are mixed creatively to signify Jack’s changing mental state. Mixing literal radio music and sound which seemed only to exist in Jack’s mind, felt a little strange to me. However, I did feel that it served as an effective tool for illustrating the character’s psychological journey.

The only element I felt could have been stronger was the resolution of Jack’s story. The narrative did a wonderful job of building suspense and intrigue around his true identity but the eventual reveal was strangely played down. After such a long build up, I had expected this moment to have more of an effect on the other characters, or on my perception of the story. Having said this, the lack of drama was perhaps more true to the play’s sense of realism.

Overall, Found is a great combination of creative writing and superb acting. The characters are easy to empathise with and their story will keep you guessing till the end. If you like a good mystery, don’t let this one pass you by.

Previous: The Chair, Unicorn Theatre – Review
Next: In the know?