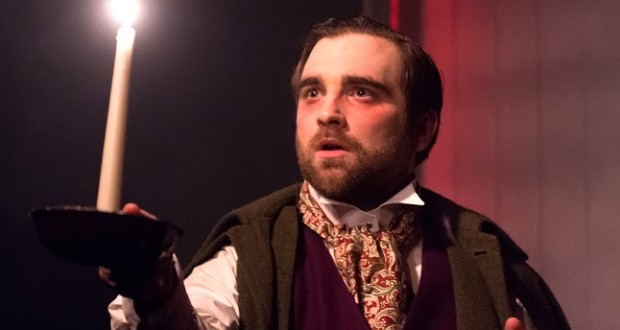 Pros: A Gilbert and Sullivan score, great performances; sparse but spot on, full of nuance and humour. What’s not to like?

Cons: A little more could be made of the set before the interval. The backdrop, which is used brilliantly in the second act, lies dormant and out of context in the first.
Ruddigore, The King’s Head – Review

Pros: A Gilbert and Sullivan score, great performances; sparse but spot on, full of nuance and humour. What's not to like? Cons: A little more could be made of the set before the interval. The backdrop, which is used brilliantly in the second act, lies dormant and out of context in the first. I love a bit of Gilbert and Sullivan. Hallmarked by quintessentially English humour and jolly catchy tunes, a G&amp;S opera will brighten up even the dullest, coldest February evening. Ruddigore is no exception. Presented by the Charles Court Opera, a small but perfectly formed group of talented&hellip;

The Charles Court Opera Company nail this production with finesse. It is lots of fun and will put a smile on your face!

I love a bit of Gilbert and Sullivan. Hallmarked by quintessentially English humour and jolly catchy tunes, a G&S opera will brighten up even the dullest, coldest February evening. Ruddigore is no exception. Presented by the Charles Court Opera, a small but perfectly formed group of talented artists headed up by John Savournin, this production had me laughing and smiling from beginning to end. CCO are now associate company at the bijou King’s Head Theatre, promising more fantastic opportunities to see their work during 2015.

The story is set in a village, where the local lord suffers an ancient familial curse: he must commit a crime daily lest he suffer an agonising death. The current heir to the title has absconded to evade the curse and lives a simple rural life as Robin Oakapple (Matthew Kellert), falling in love with the beautiful and prudish Rose Maybud (Rebecca Moon). Enter his seafaring foster brother, Richard Dauntless (Philip Lee) who desires Rose for himself, hence exposes Robin’s true identity and stirs up trouble in the village. When Robin’s younger brother Sir Despard (John Savournin), the current curse inheritor, hears of the opportunity to rid himself of the title, he takes action and poor Robin is reluctantly destined for a ghost-ridden life of crime.

The performances are simply brilliant. The cast do not sing a note wrong and act their socks off, bringing enormous amounts of humour and innuendo to the characters. They sound great in harmony, as well as in chorus, and though the lyrics are tongue in cheek, the performance is full of contrast, colour and musicality. These guys make opera appear effortless, as though singing is as natural as speaking, without losing an ounce of dramatic impact in the delivery. There are leads and supporting roles, but none can be singled out as they all warrant equal applause.

The set is sparse (unsurprising in such a small theatre space) with a backdrop of vertical blinds. I spent the entire first act wondering why that was so, as nothing was made of it throughout the first scenes and it appeared out of place. After the interval, it revealed its brilliance, and provided some of the most memorable, quality moments of the production, though it seems a shame that it lay dormant before the interval. The sound and lighting, costumes and makeup are all spot on and support the fantastic cast in bringing this hilarious scenario to life.

There are all kinds of operas and they can be lengthy and pricey, so it’s easy to see why those new to the genre might be reluctant to spend their hard-earned money on a ticket. However, I strongly urge those wanting to try out opera to see Ruddigore at the King’s Head. The venue is relaxed and friendly and tickets are around £20 (£10 if you are under 26!). You’ll sail through the performance with a beer in your hand and a smile on your face and will leave looking forward to the next production. I know I am!