Home » Features and Interviews » Pubs: the coalface of British theatre? 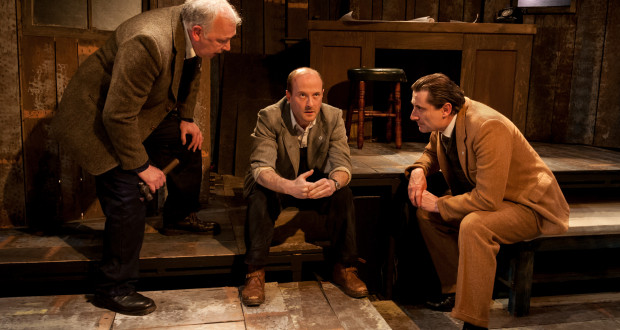 Pubs: the coalface of British theatre?

Many years ago, a certain Mr Day took his three A-Level Theatre Studies students to see Genet’s The Maids, at The Nightingale Theatre in Brighton. Clare Annamalai was one of this select group, and was delighted then, as she still is now, by the informality and intimacy of the pub theatre.

Theatre and pubs have a long association. Before the Elizabethans began building professional playhouses, theatrical productions were commonly staged in the courtyard of inns. Several centuries later, music hall originated in the saloon bars of public houses. So both history and experience demonstrate the natural affinity between booze and drama.

London is blessed with lots of pub theatres, showing an eclectic and generally high quality mix of drama, opera, comedy and alternative performances. In any given week, three or four of the shows reviewed on this site will have taken place in a small dark space above a pub. Despite their limited capacity – usually 50-100 seats – some of London’s pub theatres have carved out their own creative niche, and gained national, if not international, recognition. More impressive still is the fact that most receive little or no government funding, but rely on a combination of box office receipts and philanthropy.

That’s what we aim for…a kind of egalitarianism, approachability and accessibility more associated with a pub than a stuffy old theatre.

So if it’s not a stupid question (what with the clue being in the name, and all), what really are the defining characteristics of a good pub theatre? Neil McPherson, Artistic Director of the Finborough Theatre, describes it as ‘exciting, interesting and passionate’, albeit often ‘ramshackle and with not a lot of money’. He is also on record as saying that ‘the size and connection possible in a venue like ours is – in the end – what theatre is really about.’

For Paul Robinson, Artistic Director of Battersea’s Theatre 503, pub theatres are democratic and accessible. ‘A pub is somewhere that, by definition, welcomes all. That’s what we aim for . . . a kind of egalitarianism, approachability and accessibility more associated with a pub than a stuffy old theatre.’ For Robinson, the walk through the pub to reach the theatre is a crucial part of the experience because “you are given a little reminder of the world we in the arts say we are reflecting, but I wonder if that’s true most of the time.” It is also worth noting that the venue’s business model is often an indicator of quality. The best pub theatres tend to have a separate theatre manager or artistic director who maintains tight control over programming and artistic policy. Others simply hire out their space, with an eye to the bottom line.

It’s a neat trick, to create a space in which theatre and Sky Sports can not only co-exist, but actually share audiences.

Despite their position as stalwarts of the London theatre scene, 503 for new writing, Finborough for new writing and rediscoveries, both still draw a significant proportion of their audience from the local area and from the pub itself. It’s a neat trick, to create a space in which theatre and Sky Sports can not only co-exist, but actually share audiences; not all venues achieve it. Robinson and McPherson both operate theatres as separate businesses from the pub, but insist on the importance of a good relationship between the two entities. Not only does this allow for joint marketing and promotions, but it also helps to ensure that you don’t get the blokes on one side of the pub and the culture vultures on the other side, scowling suspiciously at each other. It is a symbiotic set-up, in which the theatre enjoys relatively low rent, the pub generates income from otherwise dead space, and each benefits from the other’s customer base. Rebecca Pryle, Managing Director of the new Bread and Roses theatre in Clapham, summed it up nicely, when she told The Stage that ‘pubs are just dying on their arses . . . so we just need entertainment really.’ But it’s also a set up that requires mutual respect and consideration: theatre-goers don’t want to hear Gary Lineker over Uncle Vanya, and pub patrons don’t want sets being shifted in and out while they try to enjoy a quiet pint.

With little or no public subsidy, pub theatres know that to survive they have to cultivate the neighbours.

Many pub theatres actively cultivate their local community. Demonstrate that you live near The Drayton Arms, and you get free tickets, or as a resident of SW11, you’ll get discounted tickets at Theatre 503. Because, with little or no public subsidy, pub theatres know that to survive they have to cultivate the neighbours, and make a visit to the local theatre as affordable as a casual trip to the cinema. It is probably not an exaggeration to suggest that a local pub theatre is an asset of community value, albeit not owned or managed by the residents. With high street post offices an increasing rarity, and ever-declining church attendance, a pub that also offers theatre is a valuable social hub. Of course the challenge of attracting audiences both from around the corner and from across the city, is artistic as well as commercial. It is not unusual to find pub venues staging a year-long programme of ‘serious’ work, then going all out with panto in December. Not only does it boost the coffers, but it’s also a great way to get local families through the door, for a Christmas outing that costs a fraction of the West End equivalent. According to McPherson, theatres like his own, 503 and Old Red Lion have been described as the coalface of British theatre; mining out the talent and then sending it off to bigger venues. The same could be said of their role in finding and nurturing new audiences.

Why then, is pub theatre so much harder to find outside London? It’s a low-cost, democratic model that when run by passionate and resourceful teams, can deliver really stunning, ambitious and surprisingly large-scale theatre. Perhaps it’s to do with population density and the cost of land. In London the potential audience is massive, and rents exorbitant, whilst in regional towns the potential audience is smaller, and rents lower, making it sensible to have a few large standalone venues. Perhaps it’s the challenge of finding enough high quality content to fill new venues. Or perhaps it’s just a question of timing. In addition to some old haunts, like The Alma Tavern in Bristol, The Marlborough in Brighton, and The Old Joint Stock in Birmingham, there are some new venues springing up. The Other Room is a new pub theatre in Cardiff, founded by Finborough alumnus Kate Wasserberg and producer Elizabeth Day. True to the Finborough’s own model, it has a clear, quite narrow artistic focus, and promises ‘the live experience with an intensity no other venue in Cardiff offers’. Closer to home we have the aforementioned Bread and Roses in Clapham, Bridge House Theatre in Penge, and The Spread Eagle in Croydon.

If you are lucky enough to have a pub theatre on your doorstep, you must cherish, frequent and support it. It is an invaluable resource that brings art into the heart of a community, and is in turn shaped by that community. As you enjoy your reasonably-priced post-show drink in the pub, you may end up chatting to the cast or the theatre staff – there’ll be no need to pop a feedback form in an anonymous box. And given the impressive track record of pub theatres in creating shows that go on to bigger, higher-profile venues – think Accolade and The Play That Goes Wrong – it’s not at all unlikely that the next time you see one of those actors, they’ll be gracing a West End stage, and you can say ‘I met them in my local’.