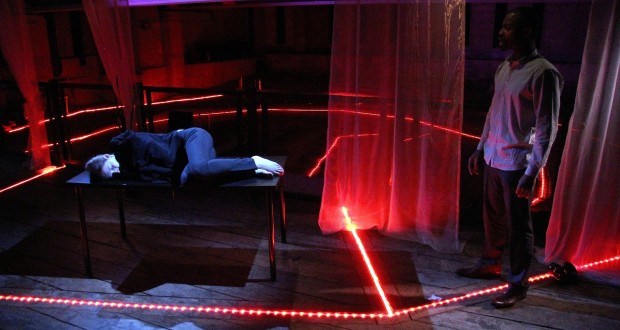 Pros: Fearless acting and a compelling soundtrack heightens the tension that builds to this play’s eruptive climax.

Cons: Cuts to the script are well handled but a sense of what is lost lingers.
Othello, The Rose Theatre, Bankside – Review

Pros: Fearless acting and a compelling soundtrack heightens the tension that builds to this play’s eruptive climax.  Cons: Cuts to the script are well handled but a sense of what is lost lingers. For anyone interested in archaeological sites or the history of theatre, The Rose Theatre, Bankside, is a rare treasure to behold. The remains of the original Elizabethan theatre are currently being excavated and the viewing platform that overlooks the dig serves as an intimate stage and seating area. If you care more about the performance you’re there to see, you need not be disappointed. From its flashy start&hellip;

If this fast-paced, intimate production of Shakespeare’s take on the perils of jealousy doesn’t do it for you, the magic of the Rose Theatre certainly will.

For anyone interested in archaeological sites or the history of theatre, The Rose Theatre, Bankside, is a rare treasure to behold. The remains of the original Elizabethan theatre are currently being excavated and the viewing platform that overlooks the dig serves as an intimate stage and seating area. If you care more about the performance you’re there to see, you need not be disappointed. From its flashy start to its appalling finish, Time Zone Theatre’s production of Othello is as engrossing as it is stylish.

The delicious tragedy of the play is in observing Othello’s blissful marriage to Desdemona take a catastrophic turn. Iago uses everyone around him, including his unsuspecting wife Emelia, to dupe the jealous-prone Othello into falsely believing Dedemona’s infidelity with Cassio. Director Pamela Shermann has masterfully distilled the play down to these five characters, incorporating most of the best scenes, and has chosen to update the play’s setting from 16th century Venice to London’s business world of today.

At the play’s opening, Iago wakes from a night’s sleep on top of his office desk to a soundtrack that sometimes speaks the verse and some cleverly placed free-frames, the fast-paced business world of the characters is conveyed. Onstage we see a telephone and computer, flowing champagne and strawberries, the men in suits and ties and the women in formal corporate wear. In stark contrast to this is Iago’s slow, brooding thoughts and movements. He exhibits a sort of omniscience; a tight grip over the fate of the characters. In the first half of the play, we are in the front room of his striving for vengeance and power.

The casting is excellent and the actors give fearless performances, particularly given their proximity to the audience. James Barnes as Othello was a truly commanding presence. His voice boomed forebodingly with his jealous outbursts, if a tad self-conscious at the subtler, emotional moments. Samantha Lock gives a subdued but no less captivating performance as Desdemona and I very much enjoyed her combative scenes with Othello where she argues for her virtue, rather than bow to his inexplicable wrath. It was nice also to see Emelia, played superbly by Emma Duncan, inject moments of comic levity and perform such a vital role as the voice of fairness and justice. It made me realise how in fuller productions, her importance can be overshadowed.

Though this reduced version sweeps through some of the script impressively, some of the scenes felt paradoxically, a bit drawn out, and the language a little slowed. Having lost so much of the context that positions Othello as an outsider, the personal drama of Othello’s striving for proof of Desdemona’s falseness could come across as overworked. Yet, all this is peanuts compared to the final bold, passionate scenes, held in Desdemona’s dimly lit bedchamber, which left me thoroughly lost in the devastation.

Overall, this fast-paced, intimate version of Othello offers up its fair share of ingenuity and flair, with much for any Shakespeare fan to admire. Though the Rose Theatre is a venue not to be missed, there is no central heating, so be aware that the temperature inside will mostly match with that of the outside, which in current climes is sub-zero temperatures! Blankets are on hand for any audience member who needs them, although I was fine without.  There was also a wonderfully enthusiastic host, who after the performance gave a five-minute fascinating talk on the history and archaeological importance of the venue, which means you get a real bang for your buck.

Previous: Skint, The Vaults – Review
Next: What even is immersive theatre?