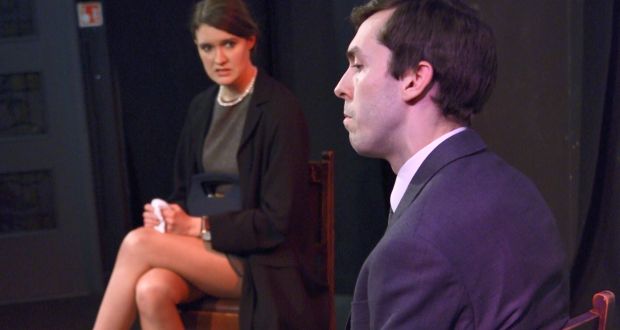 Pros: Intriguing, entertaining and moving. Cons: Seating arrangements were  a little cramped. As the title suggests, this concise, 40 minute performance takes place entirely within a small waiting room. The play begins as Harriet (Beth Eyre) is shown into the room by an anonymous man (Paul Valentine). After a brief period alone, she is joined by Paul (Mark Rush) and aside from a passing cleaner (Tara Dowd), the two are left alone to wait for their ‘appointments’. Polite conversation turns into deep reflection and gradually, it becomes clear that these apparent strangers have more in common than they first&hellip;

40 minutes of fantastic theatre. Memorable and strikingly honest. Well worth a watch.

As the title suggests, this concise, 40 minute performance takes place entirely within a small waiting room. The play begins as Harriet (Beth Eyre) is shown into the room by an anonymous man (Paul Valentine). After a brief period alone, she is joined by Paul (Mark Rush) and aside from a passing cleaner (Tara Dowd), the two are left alone to wait for their ‘appointments’. Polite conversation turns into deep reflection and gradually, it becomes clear that these apparent strangers have more in common than they first realised…

Perhaps one of the most notable achievements of this play, is the sense of momentum created by Eyre and Rush. With a continuous exchange of dialogue and no opportunity to leave the stage from start to finish, these roles would pose a challenge for most actors. Eyre and Rush maintain their characters flawlessly and deliver them with an energy that kept the audience hooked throughout. The characters of Harriet and Paul are engaging yet understated and totally believable. Through a skilful combination of script, direction and performance, we’re shown playfulness, loneliness, anger, hope and complete vulnerability, all without seeming overly theatrical.

Valentine and Dowd also deliver brilliant performances as ‘The Man’ and ‘The Woman’. Despite being small roles, I felt they gave context to the ‘world’ we were looking into, without distracting from the story. Their presence feels very natural and helps to enhance the realism of the two central characters and their evolving situation.

Director Jenny Eastop does a fantastic job of keeping the action dynamic, despite the confined nature of the performance space. Eastop’s interpretation of the script allows space for a huge range of emotions and a change of relationship between the two characters, without ever seeming rushed. As they move through their realisations and reflections, their pace, emotion and body language create a momentum, which kept the audience fully immersed in the journey.

The dialogue itself is naturalistic and writer John Bowen makes interesting use of time, by having Harriet and Paul refer to their watches intermittently. From the very start, my curiosity was peaked by what sort of ‘appointment’ the characters were waiting for and having them verbally ‘count down’ to this revelation only added to the suspense.

Due to the realistic setting of the waiting room, the play’s set and production values are purposefully simple. Four chairs, a coffee table and a rug make up the room and there is very little in the way of lighting or sound effects. In my opinion, this was perfectly suited to the style of the production as everything about the visual experience contributed to the realism.

As an audience member, the only element that could perhaps be improved, is the arrangement of audience seating within the venue. Sitting in the front row, I was close enough to reach out and touch the set. From my perspective, this was actually quite effective, as it enhanced the claustrophobia of the waiting room setting. However I had moved from my original seat in the row behind, where the view was more obscured. It was great to be so close to the action but for those sitting further back, a more spaced out seating arrangement might have been more comfortable.

The Waiting Room is a moving, honest look at human relationships. With a mixture of intrigue, twists, humour and raw emotion, it is extremely engaging and entertaining to watch. The script, direction, design and actors all perfectly compliment each other. This is a small but perfectly formed play.