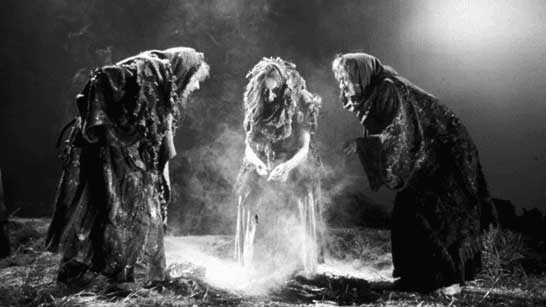 ‘Five acts. Five approaches. One thrilling play shown five different ways.’, says the blurb for Shakespeare Shuffle. Clare Annamalai went to meet some of the people behind this new production of Macbeth.

ET: First off, can you tell me a bit about the show?

SFG: Shakespeare Shuffle is a whole new way to see a production of Macbeth, where we have four different, exciting young companies, with four very different, contrasting styles, each taking on one act of the Scottish play and then coming together for the final act, to either collaborate or clash – you’ll have to come and see the situation for yourself!

ET: How are the companies different, and why have you each chosen to approach Shakespeare in the way you have?

HB: The Handlebards spend summers touring around the UK and Europe on bikes, carrying all the set, props and costume with us. And it’s just four guys, so our approach is dictated by the necessity of what we can carry. It’s very comic, very irreverent, very quick. I suppose it’s imaginative, if I can blow my own trumpet, because we have to be able to carry our props on the road with us.

MP: The Merely Players are a rep company who use no costume, no set and minimal props. Cost is not the main reason… it’s an added bonus! But artistically we feel that any sort of concept put onto the text is limiting, so we put all the focus onto the characters, the actors, the storytelling, and the audience’s understanding of the text. One actor doing one role each, actors wearing their own clothes.

SFG: Smooth Faced Gentlemen are the UK’s only female Shakespeare company. Our tagline is all the Fs – fun, fast, fresh and faithful. A female cast forces the audience to see Shakespeare in a way they haven’t done before. It allows some amazing female actresses to take on the meaty roles that we’ve all wanted to do from a young age and never realised that we could.

PB: Permanently Bard are the UK’s only company to perform entirely in pub gardens. We tour pubs over the summer, in traditional dress, and with a very irreverent, unfaithful style. We add a lot and we take a lot away. It’s full of anachronisms, bawdy and drunken. We do that to take it back to basics. That’s what Shakespeare and his men were doing. We’re taking it back to the masses, outside of theatre walls, which can be terrifying for non Shakespeare-going audiences, and putting it in a more comfortable space for the family or for people who’ve never seen Shakespeare.

ET: A ‘fast-paced’ approach seems to be common to all four companies. What is it about speed?

It comes from making theatre for the audience, instead of for the actor. It stops you being self-indulgent.

MP: For us, rhythm is really important, with the way that Shakespeare writes. Unless it’s a well-earned pause, a pause in Shakespeare is time when nothing’s happening on stage, when what you really want to be doing is listening to the brilliant text. It keeps the audience engaged, keeps them excited, makes sure that they’re always having to concentrate.

PB: He writes fast, doesn’t he? It’s as simple as that.

SFG: I think that in wider theatre in general, I’ve noticed a thing that a lot of young companies are reexploring is speed. Because if you go to a lot of the big institutions, it’s so slow and difficult.

HB: It’s not just about delivery either, it’s speed of production. With the Handlebards, it’s not necessarily fast-talking, but we have quick costume changes and set changes. It’s the Twitter of theatre!

MP: It comes from making theatre for the audience instead of for the actor. It stops you being self-indulgent.

SFG: It’s how life works, as well. We all speak quickly and do things quickly, and when you do have that moment for the audience to breathe, it really means something.

ET: When you put the team together, was there any temptation to include a company that ‘plays it straight’ with Shakespeare?

We’re all irreverent, but reverent to the text.

HB: We never steered away from anything, we just wanted a sense of variety. The Handlebards have done Macbeth as a comedy, and the Smooth Faced Gents are all female, so if anything, we were looking for a straight take on the play, to contrast with what we were already doing, so that it wasn’t too wacky for the entirety.

MP: The Merely Players play it pretty straight. I know we don’t have any costume, but we very much play it the way the play requires.

PB: And although we take liberties with it, we do have traditional values and traditional costumes. So in a way we play it quite straight.

MP: What does playing Shakespeare straight mean anyway? If you think about the audience back in those days, most of it being the drunkards in the yard, then I think ‘straight Shakespeare’ is a phrase that can get confused with ‘creating boring Shakespeare’.

SFG: All four companies exist in that tension between what’s traditional, accepted, and can be very boring, and what’s innovative, fresh, irreverent and exploratory, which can veer into….well, bad! Shakespeare’s text is stunning, and none of us would be here if we didn’t already think that, but I think all of us probably thirst to see something slightly different from what our national institutions show us.

ET: How did you allocate the acts?

The Smooth Faced Gentlemen are pretty violent, so we wanted an act with some fighting and killing in it.

SFG: We were all incredibly polite about it! And some things stood out, because they suited the strengths of a particular company.

MP: What The Merely Players find most difficult is when Shakespeare portrays the supernatural, because our stuff is so basic. So we were like ‘Act 2 doesn’t have any witches in it. We’ll take Act 2, where there’s people killing and shouting at each other and talking a lot!’

SFG: The Smooth Faced Gentlemen are pretty violent, so we wanted an act with some fighting and killing in it.

HB: When we started we had no idea what to do for Act 5; how to make the shuffle work, without making it too confusing… it’s still a work in progress! It’s our first time.

MP: I’ve not seen any of the other stuff yet, and I’m so excited about it.

HB: That’s it. None of us has seen each other’s acts yet. The first time we’ll see them is during the technical rehearsal.

ET: Have you had to sacrifice anything of your own style to make this collaboration work?

MP: We normally work in the round, because you wouldn’t have a set anyway, so it looks like an artistic choice. But that’s the only real thing for us.

HB: We’ll have tech for the first time! We just work by daylight usually.

PB: We’ve lost all the booze, I guess, and we normally work in traverse. Just the scenery of gardens too. We redesign the show for each garden that we go to. If it’s got a big tree, or a playground, that becomes part of the concept. It’ll be interesting for us to be inside, and to have a roof.

ET: What future plans do you have for Shakespeare Shuffle?

SFG: There’s been some talk of doing something similar in Edinburgh, or something more site-specific. Greenwich have already asked if we want to do it there again.

MP: Everyone wants us basically. We’re taking over the world!

ET: In the corporate world, a collaboration like this is often a dry run for a full merger. Is there anything you’d like to tell Everything Theatre readers?

MP: Well I’m not allowed to be in the Smooth Faced Gentlemen, so….

HB: It’s not a merger, but I think it sparks the beginning of the collaboration.

SFG: I think it opens the door for more collaborations like this. We’re not the only young Shakespeare companies in London. There are lots of other people doing great work, and if it can inspire other people to work together a bit more.

MP: We hope that in ten years time these companies will be fully-fledged professional theatre companies, and the people working in them will be working actors, working directors…. It’s about creating the next generation of the industry.

HB: It makes sense for us. Because we’re all competing for the same funding. It seems a shame not to do this, and help each other out.

SFG: Exactly. It’s better to be friends and support each other.

MP: There isn’t really direct competition as far as audiences are concerned. Nobody’s going to say ‘I saw the Smooth Faced Gents’ Hamlet, so I’m not going to go and see the Merely Players’ one.’ The main positive for each company out of this is cross-pollination of audiences.

PB: It’s a chance to learn from each other’s experiences and processes, as well, which is kind of rare in this industry.

ET: If you were ‘permanently bard’ from performing Shakespeare, whose work would you choose instead?

MP: I’d quite fancy the challenge of doing a ‘no costume, no set, minimal props Chekhov.’ I think the energy and pace that we use would work and be different. Like Shakespeare…. noone writes human nature better than those two.

HB: We’re considering the Handlebards’ Wilde Ride. But that’s just based on a pun, and nothing else!

PB: We’re kind of hampered by our name, but we’d like to do some Arthur Miller at some point.

SFG: Beckett and Stoppard and some of that era of work could also be quite exciting. Some of that farcey, comedy stuff, with the darker undertones, could work well with an all-female cast.

SFG: I struggle to even think about moving away from the era of Shakespeare. Because I love sitting down with the text; the clues are all there, and it’s like finding your way to the treasure pot at the end. When you get to the treasure pot, it’s such an amazing feeling.

ET: Finally, most of your shows involve audience participation. Can we expect any in this Macbeth?

SFG: We’re not going to give that away!

HB: I can speak for my act, but I don’t know about the others.

SFG: Greenwich Theatre is a big theatre. So if you’re scared of audience interaction, then there are 399 people who can get picked before you!

Shakespeare Shuffle is at the Greenwich Theatre on Friday 30 and Saturday 31 January 2015.